SCOTTSDALE – At the intersection of Camelback Road and 75th Street sits a sports museum disguised as a steak house and ribs restaurant.

Opened in 1981, Don & Charlie’s emerged as a place known for its food and all that covers the walls and ceiling.

Around every corner is a piece of memorabilia. A walk through the wooden double doors reveals hundreds of baseballs signed by the legends of the game.

On the other side of the entryway are photos of owner Don Carson with various celebrities and sports figures who have eaten there. In the dining room and bar area, jerseys hang from the roof.

The Arizona icon attracted countless celebrities over almost 40 years, but Don & Charlie’s served its final meal Wednesday night. Carson recently agreed to sell the property so a hotel could be built.

“It’s been an amazing place, and this is a really sad night for me,” Former MLB Commissioner Bud Selig said.

Carson thought it was time to move on.

“One of the biggest reasons I’m doing it is because I haven’t seen my grandkids in San Francisco since Thanksgiving,” Carson said. “I think it’s time for me to step back.”

Over the waning weeks of its announced closing, people have come in droves, filling the restaurant nightly. The number of reservations prompted the restaurant to turn away walk-ins.

All the attention has left Carson unsettled.

“I didn’t do this for appreciation. I did it because I love my craft,” he said. “That’s making me a little sad for the last six weeks as I’ve been getting letters and calls and cards.

“It’s a humbling thing. It’s nice because you’re never standing in a stadium and hitting a home run and people are going crazy. You’re just here trying to satisfy people and make them happy.”

Every inch of wall space in Don & Charlie’s is taken up by a sports memento.

From baseballs, gloves and bats to footballs, helmets and flags to signed magazine covers, the place is so rich in history it lures sports fans from all over the country.

How did Carson accumulate all the memorabilia? Not by buying any of it. 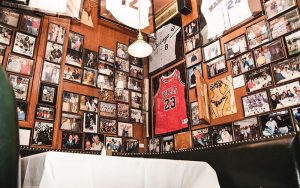 Don and Charlie’s is known across the country as a hot spot for baseball memorabilia, but the walls honor anything sports. Jerseys worn by Jerry Rice, Michael Jordan and Peyton Manning are among those that can be seen throughout the restaurant. (Photo by Tyler Rittenhouse/Cronkite News)

“I don’t think stuff is good without a story,” Carson said. “We’ve all been to airport bars and we’ve all been to bars around the country and I can walk in and look around and I can see that they went and bought a bunch of stuff.”

One night in the 1990s, Carson was having a drink at the bar when NFL Hall of Fame wide receiver Jerry Rice noticed his photo was absent from the collection on the wall. Rice approached Carson, who explained that he doesn’t buy anything, so the 49ers legend left and came back with a 12-by-18 photo of himself and a Sharpie to sign it.

“He said, ‘Now you got something.’ Now, I’ll put it up and it’s been up in the bar for about 25 years, so that’s a story,” Carson said. “I think that makes it more interesting.”

Carson explained why it was special to gather the memorabilia through gifts rather than purchases.

“It’s not like everybody has it. Everybody doesn’t have that Sports Weekly that’s probably 20 years old with Barry Bonds and Willie Mays and sometimes a person is hard to get a signature,” Carson said. “Derek Jeter is over there and sometimes I wait five, 10 years to get something signed, and that’s a story.”

When he first opened the restaurant, he never imagined having as much stuff displayed as he has now.

“I was in those days, still taking it day-by-day,” Carson said. “I absolutely wasn’t thinking we would be the next big thing, and I don’t think we’re necessarily a great, big thing now. We’re just grinders. We grind and try to make people happy.”

What is he going to do with all the memorabilia?

When Don & Charlie’s opened in the early 1980s, it was competing with another restaurant, the Pink Pony, around the corner on Scottsdale Road. The Pink Pony was walking steps from Scottsdale Stadium, the spring training home of the San Francisco Giants, and it attracted the baseball community.

Carson, who called the Pink Pony the “mecca of spring training restaurants,” knew he had to figure out a way to attract the same clientele to Don & Charlie’s. 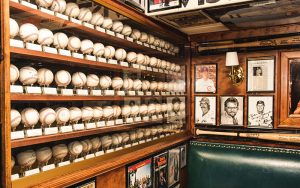 Baseballs, baseballs and more baseballs. Signed balls are displayed at just about every corner at Don & Charlie’s in downtown Scottsdale. (Photo by Tyler Rittenhouse/Cronkite News)

“My goal was to have people come here once and go to the Pink Pony 10 times, and our goal was to meet people, talk to them and try to give them a chance.”

Carson described what won them over and the impact it had on Don & Charlie’s.

Selig said the restaurant resonated with the baseball community.

“Just walk around and look at the history and the people that came in. Wherever I go in baseball, people would say, ‘I’ll see you at Don & Charlie’s next year,’ so it became a real baseball place.”

USA Today Sports national baseball writer Bob Nightengale ate at Don & Charlie’s for the final two nights and was sad to hear it was closing.

“It’s just such an institution and you felt better if Don is happy, then I’m happy but when I’m with my friend Dave Reynolds, it’s like we wanted to be here on the last night,” Nightengale said. “We just wanted to be a part of the last night here out of respect for Don. Almost like a eulogy.”

It will feel strange next spring training without it being open, he said.

“It’s almost like where do we go. People back in the day used to go to the Pink Pony. Then it was Don & Charlie’s and now I don’t know where people will go,” Nightengale said. “It’s like a wide-open canvas like where do we go from here? It’s a great question, nobody knows where to go.”

Recently retired Arizona Fall League president Steve Cobb said Carson has been wonderful to the league, inviting teams and players for a meal at Don & Charlie’s every year.

“Sitting here having dinner tonight, it’s hard to believe that this establishment will not be here in the near future,” Cobb said Wednesday. “Wonderful, wonderful memories, many with baseball players and executives so it’s certainly part of the fabric of this community and it’s going to be missed.”

Cobb said that Carson would offer Fall League players meals when they didn’t have any money and he believes Carson established himself in the baseball community by building a strong client base over the years.

Cobb values his relationship with Carson, always coming through in the clutch.

“I found out that the secret ingredient in my wife’s five-bean chili is actually the barbecue sauce that’s served here, so I’ve come here in desperation two or three times after hours begging for the sauce and Don’s always delivered.”

Selig ordered the same steak every time at Don & Charlie’s and one time, it just appeared on the menu that it was going to be named after him.

“Don finally decided he would name it after me, so that was great and that’s why I’m taking it home.”

Selig is sad to see it go.

“When I came back to Arizona from Milwaukee, I came back 24 hours earlier just so I can be here tonight.”

Family is everything for Carson and that extends to his employees.

“Family can encompass a lot of different areas, but I believe everybody that works here is part of it. We’re a huge family,” Carson said. “We certainly have lives outside this restaurant, but I’m a firm believer in family and making it as nice as it can be in a working relationship.”

The family bond of Carson, the employees and the restaurant is what made this an emotional final week of service.

From the hostess to the waitresses to the customers, everyone formed a bond with the restaurant.

Selig has been coming to Don & Charlie’s for nearly four decades, forming a special connection.

“It’s part of our family. Obviously, there’s a great baseball connection but it became a connection for us as a family,” Selig said. “The fact that we spent the whole night worrying about where we are going to start going, because we were here a couple times a week. Don is like family. It’s a very sad night for me and I don’t mind telling you that.”

Carson walked around the restaurant on the last night, greeting customers and taking pictures with dozens of guests as they bid their final farewell. Employees were taking their last pictures in the restaurant together.

Christine Brown, who worked at Don & Charlie’s for 19 years, said she’s sad that she won’t see fellow employees every day.

“A lot of the kitchen staff has been here for a very, very long time and you see everybody every day and it’s just like a big family,” Brown said. “It’s going to be hard not seeing all the guys in the back, not seeing Don every day, just everybody. It’s going to be sad.”

Brown said she made sure not to wear any makeup Wednesday night, expecting a lot of tears and hugs.

Krissie Bannon came on as a waitress for the final six months, but she’s never loved a job before like this one, due in large part to the atmosphere

“We have servers who have been here for 30 years, 25 years, but I’ve only been here for six months, but I truly feel like a family.”

After months of speculation of the restaurant’s future, Bannon described the meeting in which Carson formally told the staff that it was closing, giving everyone one final task.

“It was very important to him that everyone had a place to go so he told everyone, take some thought,” Bannon said. “Think of some place fabulous and come up with two to three choices and he’ll personally make the call, if we needed to, to make sure we got the job.”

Don & Charlie’s has left an indelible mark on the Arizona and sports community and the employees that worked there.

Carson’s final message to his staff was simple.

Carson always made sure to say that his staff works “with him” rather than “for him” and that message has been received by the entire staff.

Bannon described what it was like to be a part of the restaurant’s storied legacy.

“I’m really proud of it. I’ve been around restaurants abut I’ve never been in this type of environment and because I’m a momma, the stories I hear, people having their first birthday here, their 18th anniversary,” Bannon said. “I feel blessed because there’s nothing like this. It’s fabulous.”

Selig’s close relationship with Carson has transcended past the restaurant.

“He’s a very special guy who took this restaurant and built it up beautifully. Amazing story.”

Carson wouldn’t rule out the possibility of reopening the restaurant in some new fashion, but for right now, he’s focused on spending time with family and friends.

“I am totally overwhelmed with the response to what I’m doing. I never expected this much attention, ever in my life,” Carson said. “I think people had fun here and they liked what we did, but I never thought we would garner this attention from all over the country. I really didn’t. It’s pretty heavy stuff really.”