FLAGSTAFF – As firefighters on the ground continue to battle the Museum Fire just north of the city, firefighters in the sky were redirected Wednesday evening when a drone entered the fire’s airspace.

“I feel like (there is an incident) every large fire, especially close to a city like this,” said Steve Kliest, a spokesman on the Museum Fire. The drone meant that at least two of the seven helicopter crews had to change locations to refill buckets with water or fire retardant.

The wildfire, which started Sunday, has scorched more than 1,900 acres and is 12% contained. Authorities said islands of heavy fuel loads continue to emit plumes of dense smoke visible for miles. Monsoon weather is expected to bring more rain throughout the week, although heavy rain is not forecast. That could reduce the threat of flooding and mud flows in the burn area and allow crews greater access to the fire lines, fire officials said. 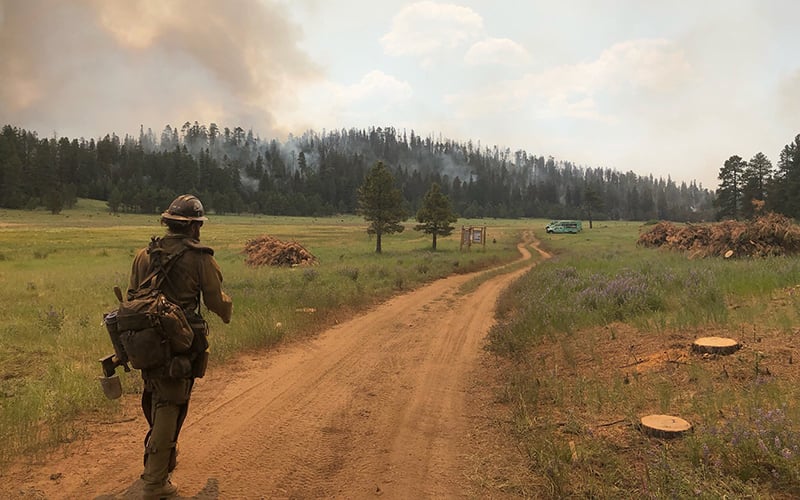 Two helicopters were rerouted Wednesday evening because a private drone was spotted over the southeastern part of the Museum Fire. The wildfire has burned more than 1,900 acres in rugged terrain near Mount Elden. (Photo provided by Museum Fire Information/Twitter)

This isn’t the first time a drone has halted or altered firefighting operations in the West. In 2014, when the National Interagency Fire Center began recording such incidents, 16 were reported. In 2016, there were 41. This year, there have been seven reported incidents so far, including the Museum Fire.

“Drones can interfere with fire operations,” said Jessica Gardetto, a spokeswoman for the fire center, which is based in Boise, Idaho. “If an aircraft collides with a drone, it could cause the aircraft to crash, potentially killing the crew, killing firefighters, killing anyone in the area.

Drone interference also occurred earlier this summer on the Coldwater Fire burning near Clints Well, northeast of Strawberry in the Coconino National Forest.

Once a drone is spotted, air operations often shut down immediately, Gardetto said.

“And if we do that, the fire can grow in the meantime … threatening lives, threatening property. We don’t think people have ill intent, they’re just curious,” she said.

Kliest said grounding the helicopters can be dangerous. If there is no water on the fire and it takes off, firefighters could be injured or even die.

It’s illegal under federal law to interfere with the operations of firefighters. On the state level, criminal repercussions for those illegally using a drone vary. Arizona Revised Statutes 28-8280 and 13-3729 could hypothetically apply as Class-1 misdemeanors.

The National Interagency Fire Center is running an awareness campaign to combat the problem. According to the campaign website, flying a drone near a wildfire “can result in a significant fine and/or a mandatory court appearance. So, be smart and just don’t fly your drone anywhere near a wildfire. No amount of video or photos are worth the consequences.”

The Coconino County Sheriff’s Office is working to figure out who was flying the drone in the Museum Fire airspace but no arrests have been made.

About Cronkite News 2504 Articles
Cronkite News is the news division of Arizona PBS. The daily news products are produced by the Walter Cronkite School of Journalism and Mass Communication at Arizona State University.