New research by the Southwest Watershed Research Center and the University of Arizona department of Hydrology and Atmospheric Sciences claims that global warming is causing our monsoon season to be more intense. KGUN9 carried the story (link). You can read the whole paper, published in Geophysical Research Letters: Intensification of the North American Monsoon Rainfall as Observed From a Long-Term High-Density Gauge Network (link).

KGUN9 characterizes this news as a bad thing (and we all know that global warming produces only bad results): “The higher intensity can also spell trouble for soil, as erosion would happen more often and quicker. Infrastructure, the researchers said, is also at stake. Drains, washes, walls and bridges need to be built to withstand a higher flood capacity.”

I my opinion, the purpose of this paper was to give the authors publishing credits, because it seems to do little else.

The research paper says: “The mean of rainfall intensities exceeding the 95th percentile have been increasing during 1961–2017 period for all durations longer than 1 hr at a rate of 0.50 to 0.03 mm/hr per decade….” Does an increase in the rate of precipitation of half a millimeter per hour per decade sound troublesome? (A millimeter is about the thickness of a penny.) 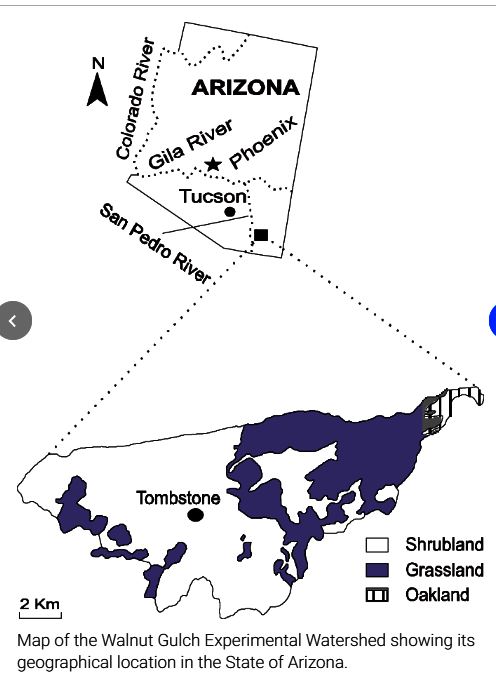 The study was conducted in the Walnut Gulch Experimental Watershed which is centered on Tombstone, AZ. Data were collected from 59 rain gauges dispersed over an area of about 58 square miles. (Metropolitan Tucson covers about 237 square miles.) In my opinion, making broad claims from such a small sample base is problematic. 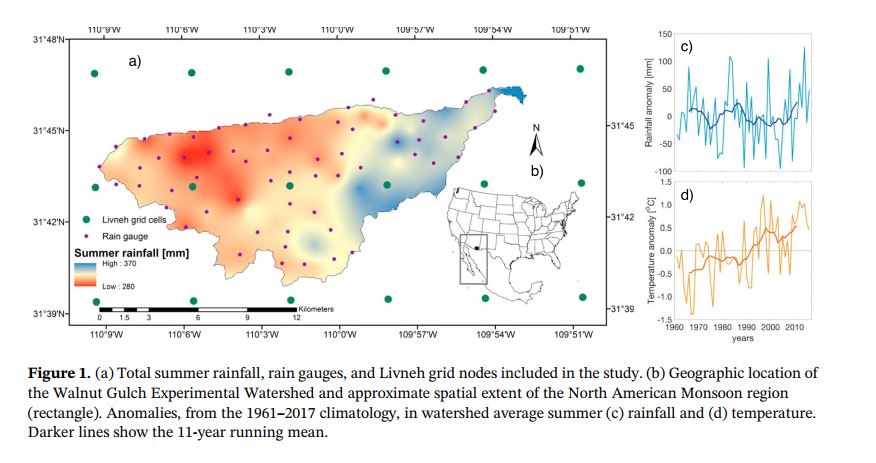 Looking at the broader Southwest, we see there is also no relation between temperature and precipitation during the monsoon season. Note that the region has warmed since 1970 when climate scientists were predicting an imminent return to a glacial epoch. 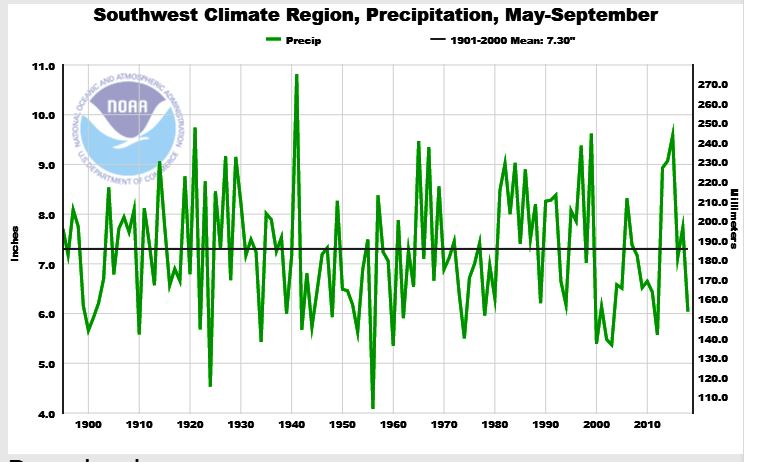 Regarding the Walnut Gulch Experimental Watershed, the researchers say “Average summer rainfall, May through September, over the watershed for the 1961–2017 period has been approximately 293 mm (112 to 370 mm range), which represents approximately 60% of the annual total (Figure 1a).” That amount seems much higher than the amounts shown on the graph of the broader southwestern region. Extrapolation of conclusions from the small study area may not be justified for the region as a whole.

Studies like this should be taken with a grain of salt (and perhaps with a lime wedge and Tequila).
Note to readers: