While some leaders in the Republican Party seem quick to accept an apology from 12 News’ Brahm Resnik, others aren’t having it. They say that his pattern of abuse makes the apology ring hallow.

Resnik, reporter-turned-pundit, apologized for a tweet he posted over the weekend in which implied that Republicans were Nazis when he drew a comparison between an Arizona Republican Party tweet and a Nazi slogan. Although President Obama and former Governor Janet Napolitano had made very similar comments as the Arizona Republican Party did in its tweet: “One people. One land. One Arizona,” Resnik invoked the Third Reich instead in his attack. 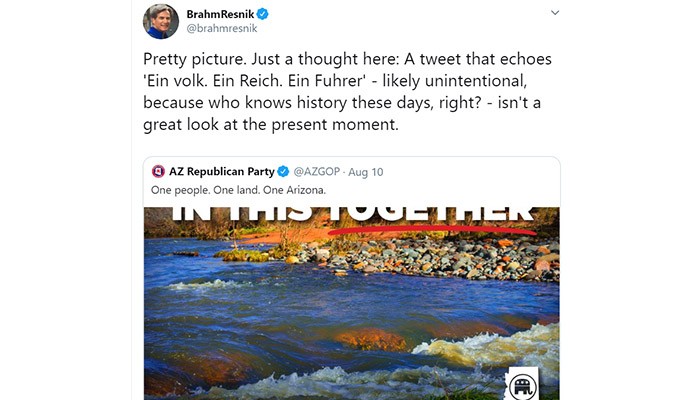 After sparking hurt and outrage, Resnik finally tweeted: “APOLOGY. I apologize for the tone & content of a tweet I posted over the weekend that has angered many Arizonans. Social media calls on journalists to exercise restraint & good judgement. I failed to do that. Recriminations against 12 News are undeserved. The fault is mine alone.”

The Arizona Republican Party account tweeted a scenic Arizona picture on Saturday, and captioned it, “One people. One land. One Arizona.”

KFYI host James T. Harris was the first to call out Resnik for the insult and was quickly followed by AZGOP chair Kelli Ward, and U.S. Rep. Paul Gosar.

They could have quoting Obama but your bias took over. The deranged see Hitler everywhere. Learn to code. #TrumpDerangementSyndrome https://t.co/fy7ZBb1EYK pic.twitter.com/sJHYfpkva6

Jesus Brahm. Don’t tweet while high AF. The graphic is a message of unity. You know. Like out of many one. It’s on our money. E Pluribus Unum. You went all Nazi in record time. https://t.co/33s2P4AmNq

Ward tweeted. “Reporters are supposed to report, NOT create news! Many people (phones ringing off the hook) demanding he apologize.”

In an interview on the Mike Broomhead show on KFYI, Ward said she would accept an apology from Resnik. Ward followed it up with a tweet dripping in sarcasm:

Is this a reporter or a columnist? Hard to tell anymore at @azcentral with so much editorializing ?

Thank you, @brahmresnik, for apologizing for your incendiary insult. Arizonans of all political stripes 100% accept. Remember, we‘re all in this TOGETHER! https://t.co/hVAGRXYiCX

Last month, Kari Lake with FOX 10, was taken off the air for nearly a week for an off-the-air comment about writers at the progressive Phoenix News Times. According to sources, petitions are in the works calling on 12 News to do the same to Resnik. One Republican Party insider said, “If it weren’t for double standards the industry would have no standards at all. If a woman gets sent to time out just for expressing a right of center thought, why not a progressive man for calling people Nazis?”

Brahm’s hateful rhetoric should not be tolerated. He could incite violence. I propose a twitter and Facebook ban for him only to be lifted when #LauraLoomerForCongress is returned to social media. PS I support Brahm’s right to say stupid shit. And our right to call him out. https://t.co/y1anWkdes0

Interesting. AZCentral publishes apology by Resnik, but ultimately uses it to slam @DrPaulGosar. Who is the real propaganda machine here? #JustTheNewsPlease @AZGOP @kelliwardazhttps://t.co/4rIOmCkwhT

Here’s the really sad part of all this: Resnik both besmirched all Arizona Republicans, as well as Jews who perished in the Shoah. By falsely accusing the GOP of Nazism, it cheapens what happened to the millions of Jews and other minorities who were persecuted by the Nazi regime. https://t.co/RnupGNo7ll