Despite my best efforts, and the fact that gas tax and vehicle registration/license tax distributions back to Pima County reached a record breaking level, too many of our roads will continue to decline as our taxes increase.

On August 19, 2019, the Pima County Board of Supervisors formally approved a budget of more than $1.3 billion for this year, which included a tax increase.

The increase in taxes is due to the fact that property valuations increased. The Board would have had to cut the tax rates to prevent your property taxes from increasing. That did NOT happen and as a result, the majority of taxpayers in Pima County will see another property tax increase on their next property tax bill.

As you can see, $95.6 million was distributed by the state of Arizona to unincorporated Pima County. The total for all jurisdictions within Pima County total $187.6 million dollars. That is in just 1 year!

In the current fiscal year (FY 2020) Pima County has budgeted $26 million for pavement preservation. This is the most ever allocated since I was elected to office in 2012.

You may recall when the director of the Transportation Department spoke at a budget hearing in 2015 and stated that 97 percent of her department budget was funded by HURF/VLT revenues. In that same hearing, she stated they had budgeted $0 for pavement preservation.

I have long argued that it made no sense to grow the Transportation Department to a size which required all of our road repair funds to be spent on salaries and overhead expenses. Last year, the County downsized the Transportation Department for a permanent savings of $15 million per year. This is a good start. More efficiencies need to be found. Pima County outsources pavement preservation and it is time to find efficiencies in all departments within Pima County and use these funds for roads.

While we are told the county is cash strapped and unable to fix roads, the crony deals continue.  County buildings are being mortgaged to fund nonessential projects and provide gifts or loans for favored developers.

I’ve often heard board members state “We can walk and chew gum at the same time”. I beg to differ. We clearly aren’t focusing on one of the biggest factors hurting our economy and that is the roads.

You were also told that bonds were the way to get our roads fixed. Recall the 1997 HURF road bond of $350 million that voters approved by election. According to administrator Huckelberry, that bond has cost us $89 million in interest costs and the county has finally just issued all of those bonds. 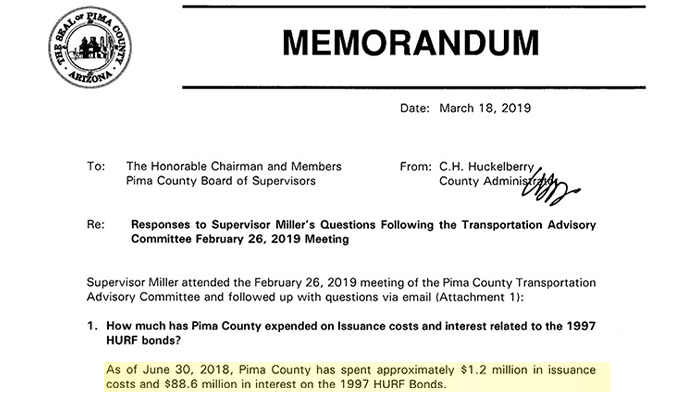 I am against issuing bonds for road repair due to the extremely high interest costs as well as the more than 22 years it took to issue these bonds. Road maintenance shouldn’t be an after thought. Throwing an infusion of money at roads every 10 years is mismanagement at best. Roads must be prioritized and funded properly each year.

During the final tax levy hearing on Aug. 19th, 2019, I identified more than $58 million for budgeted but vacant positions in the current budget. I also analyzed the amount realized as a result of not filling these positions each year. $39 million was realized in the last fiscal year that ended June 30th. $39 million is the amount left over at the end of the year as these positions were NOT filled.

Ask yourself why only $26 million of the $95.6 million is being allocated to roads. Until the board of supervisors gets serious about fixing roads and allocates at least 80% of the HURF/VLT monies to road repair and until this board cuts the budgeted vacant positions and uses these monies for roads, I will not support a gas tax increase that enables more bad behavior.  It is time the Board of Supervisors makes the roads the #1 priority and demonstrates that focus to the taxpayers. Increasing gas taxes would simply give the Board of Supervisors  more money to mismanage.