On Monday, Pima County Supervisor Ally Miller announced her intention to introduce her proposed plan to fix the County roads over the next ten years. Miller’s plan, which will not increase taxes, includes over $1 billion in repairs.

To be precise, a total of $1,263,740,427 will be allocated to road repairs without necessitating an increased burden on Pima County taxpayers.

According to Supervisor Miller’s office, she will be discussing her plan at the November 5, 2019 Board of Supervisor’s meeting.

“I am very excited about this plan and the fact that it can be accomplished without raising taxes,” stated Supervisor Miller in a press release.

Miller is offering what is described as a “conservative” and “comprehensive” proposal for consideration of the Board.

A majority of the Board has allowed monies set aside for road repairs to be spent on pet projects. As a result, close to 90 percent of Pima County’s roads are in failing condition.

In August 2019, Miller demonstrated that the County had received “record breaking” levels of HURF (Highway User Revenue Fund) and VLT (Vehicle Licensing Tax) monies. Miller noted that “$95.6 million was distributed by the state of Arizona to unincorporated Pima County, with a total for all jurisdictions within Pima County of $187.6 million dollars.” Yet, the majority of the Board voted to raise taxes and fix few roads.

Despite the fact that the majority of the Board are democrats, they have allowed the roads to crumble at a devastating cost/impact  to the working poor as well as the environment.  According to a recent article in Wheel News, “pavement preservation brings significant environmental benefit in reduction of CO2 emission due to the improved pavement surface condition.” Still, no amount of data or public outrage has moved the Board to demand that Pima County Administrator Chuck Huckleberry focus on road repairs.

Miller’s Road plan was released on October 21 in preparation for the November 5, 2019 Board of Supervisor meeting: 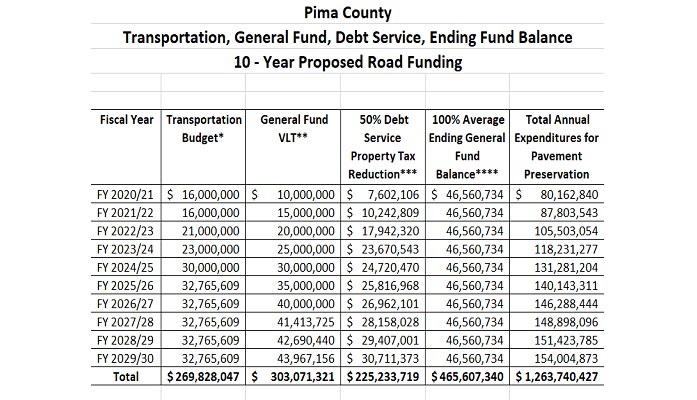 About ADI Staff Reporter 601 Articles
Under the leadership of ADI Editor In Chief Huey Freeman, our team of staff reporters work tirelessly to bring the latest, most accurate news to our readers.