The off-year annual meeting of the Arizona Republican Party is usually not a very big deal.  The high-profile race for Chairman takes place the year before so other party offices like Secretary and Treasurer are up.  They are not marquee matchups and not all are even contested this year.  But the race for First Vice Chairman has taken on great significance because one of the candidates running, Raphael Ahmed, has been attacked online for being Muslim, and the attacks are both ugly and personal.

The candidates running are Ahmed, Christoper Campbell, Michael Farrar, and Pam Kirby.  And while the candidates themselves are behaving themselves, the same cannot be said for a few of their supporters.

Dan Farley, a Pam Kirby supporter, believes that anyone who follows Islam is a problem and does not belong in the GOP.

Karen Wood claims Ahmed is a supporter of gang rapes, Sharia Law, and slavery, all while repeatedly referring to him as a “Moslim,” the derogatory term for Muslims. 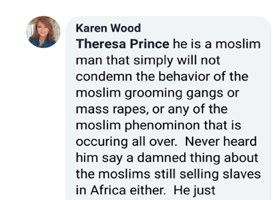 LaJuana Gillette’s feelings don’t appear to be limited to just Muslims, as she wants a GOP and an entire country that refuses to accept minorities altogether. 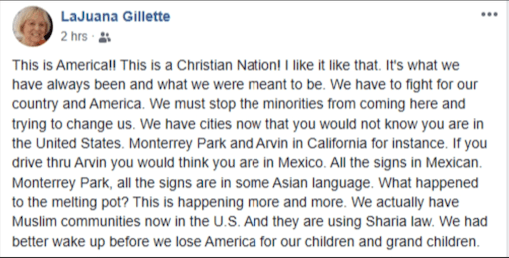 The optics for these attacks is terrible for a Party that already has to deal with a media that loves to portray it as inherently racist.  When Raphael Ahmed was contacted about these attacks he said he was saddened by them and worried about his kids reading them, but he also said that he had been “contacted by probably somewhere between 100 and 200 people who wanted me to know that these people did not speak for them, and that they were glad I was running and they were glad I was a Republican.”

Ahmed also pointed out that he and his wife were both staunch opponents of Sharia Law and that Sharia was utterly incompatible with not just the U.S. Constitution, but civilization itself.  Ahmed’s wife Farhana led the AZGOP’s Minority Outreach efforts for several years and Ahmed says they have together registered approximately 2,000 Republicans because of the GOP’s message of opportunity for all and because, as he puts it, “people who have escaped socialism in other countries are the best allies to make sure that we stop it here in America — and that means stopping the Democrats.”  Ahmed pointed out that nearly 20% of American Muslims voted for Donald Trump for President and that groups like Muslims for Trump are welcomed by the Republican Party and the Trump Campaign.

In addition to being a Republican since he legally became a citizen more than 35 years ago, Ahmed also spent 13 years in the U.S. Navy.  It is unclear from their Facebook profiles whether any of Ahmed’s attackers ever served, but it does not appear that they did.

Saturday’s meeting may be genuinely significant for Arizona’s Republican Party, as how it treats the people it needs, if it wants to continue growing and winning elections, will be on full display.