On Wednesday, Secretary of State Katie Hobbs conceded the fact that her office must accept in-person candidate nomination filings as per statute, but not before accusing Senate president Karen Fann and Arizona Attorney General Mark Brnovich of being “part of a coordinated partisan game.”

Hobbs stunned candidates and other politicos when she changed the rules unilaterally for filing candidate nomination petitions. Hobbs announced that in response to the COVID-19 health crisis her office was refusing to allow candidates to file their petitions in person and was ending walk-in nomination filings in spite of Arizona law. Instead she demanded that petitions should be mailed in. That plan would have disenfranchised candidates as it would force them to mail-in the petitions earlier than the deadline in order to meet the filing deadline date. It would also give Maricopa County candidates an advantage over more rural lawmakers where the mail would take even longer to arrive.

The Arizona Republican Party complained that the decision, made just days before the April 6 filing deadline, was causing “confusion and uncertainty among candidates and voters alike.”

Hobbs’ staff validated those complaints when they gave different instructions regarding the changes to candidates. In fact, State Senator Vince Leach posted emails from the SOS on Twitter and wrote that he had “received 3 different communications from AZ SOS office today. All saying something different & not as clear as the AG opinion issued 3/24/20. I will be delivering in person to insure the chain of custody of these important documents.” 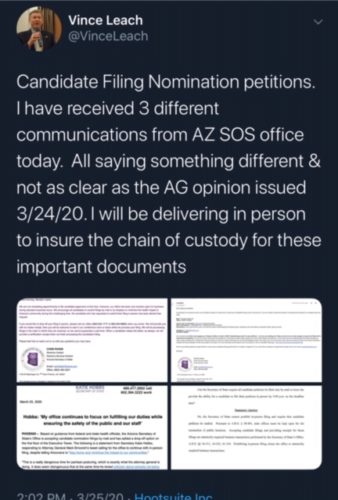 Republicans like Leach were not the only candidates concerned. Stephanie Marie Adame responded to Hobbs’ tweet, “I am a Democrat and do NOT agree with @SecretaryHobbs.” 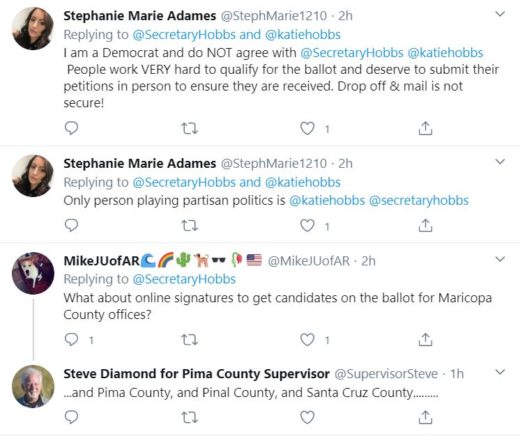 Despite the clearly personal and some say “paranoid attack” by Hobbs, Fann tried to keep a civil tone as the State grapples with a growing infection and death count from the coronavirus. In her response, Fann tweeted that she was “disappointed this has now turned into a “political” battle which was NEVER the intention.” Fann went even further to try to civilize the discourse by complimenting Hobbs. She tweeted, “To be clear, I have commented how professional SOS staff has been. Senate concerns were to ensure we all followed the constitution to avoid lawsuits. Mail in only would have shortened signature gathering time and was discriminatory against rural candidates.”

Brnovich sent a simple message in response to Hobbs. He tweeted:

Abiding by the law is not a partisan matter. We’re glad to see the Secretary of State will be fulfilling her constitutional duties following our legal opinion. We are all called to protect the health and safety of employees, while simultaneously being transparent with the public and respecting the law.

Hobbs won a narrow election in 2018 in large part because of former Secretary of State Michele Reagan’s inability to run a competent office or follow the laws. Critics say the first two years of Hobbs’ term have looked like little more than a sequel to the previous administration.