State Senator Michelle Ugenti-Rita’s stalking and sexual harassment of a former legislative staffer turned lobbyist has not diminished Congressman David Schweikert’s support for her, according to his recent endorsement that Ugenti-Rita rolled out as part of a push to get enough signatures to qualify for the August 4th primary ballot. 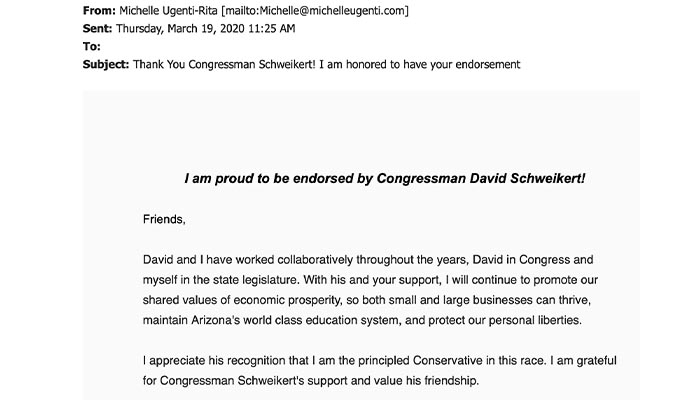 Ugenti-Rita, who has courted both Tea Party support with her conservative rhetoric and feminist support with her longstanding efforts to pass the Equal Rights Amendment (ERA) along with her whistle-blower status from when she took down State Senator Don Shooter on charges on harassment in the height of the #MeToo movement, was herself trying to coerce a female legislative staffer turned lobbyist into engaging in sexual threesomes with her then-lover, and former House Chief of Staff, Brian Townsend, according to sworn testimony given by the lobbyist.

During the Shooter investigation, it was discovered that pictures of Ugenti-Rita engaged in sexually explicit acts with Townsend were sent to the lobbyist’s cell phone, along with invitations to join the couple.  At the time, Ugenti-Rita claimed to have no knowledge of the pictures being sent and Townsend testified that he had sent them without Ugenti-Rita’s knowledge.  That satisfied the investigators at the time, whose focus was Don Shooter, not other legislators.  The brief mention of the matter in the final report, and the statement from investigators that they found Ugenti-Rita credible and her sense of betrayal at the hands of Townsend convincing has been relied on and repeated by Ugenti-Rita as she has explained herself to voters in her district.

However, Ugenti’s claims that everything was investigated and she was cleared are clearly false once the lack of actual investigation becomes clear, and the later testimony from the victim as part of a separate legal action paints a damning picture of the lengths to which Ugenti and Townsend pursued the victim against her wishes.  Multiple personal interactions, a series of text messages, and even a proposition made in a hotel room by Ugenti to the victim, where she encouraged the victim to stay around for Townsend to return, make it clear that Ugenti was an aggressor in the matter.  Far from being personally betrayed by Townsend’s alleged unilateral actions, Ugenti and Townsend remain together, although Ugenti kept him at a distance during her tough 2018 campaign when the affair first became public.

Political observers are largely surprised that Congressman Schweikert would endorse her given the recent revelations.  “Either he doesn’t read the newspapers and he buys her story that everything was investigated, or he just doesn’t really care about those sorts of things and he’s just helping out a fellow incumbent.” said one Arizona-based politico as part of a conversation about Schweikert’s upcoming re-election prospects.  “I don’t think it will really matter in his race, everything at the federal level seems to be about being for Trump or against Trump, but I don’t think he should be giving the Democrats any more reasons to attack him in 2020.”

Ugenti-Rita has well-funded opposition in the Republican Primary from former conservative legislator Adam Kwasman, although her prospects recently improved when a third challenger, Alexander Kolodin, who has told supporters he will spend $100,000 of his own money on the race, entered the primary as well.