An article published in ADI on April 28, 2020, is about a new paper which claims that the Southwestern US is entering a megadrought and that the drought is made more severe by human-caused global warming. That claim is based on tree-ring analysis and computer modeling speculation.

Droughts have occurred due to natural cycles, but there is no physical evidence that carbon dioxide emissions play a significant role is controlling global temperature or precipitation. The new paper presents no evidence that alleged “human-caused” global warming is making the drought worse, it is just speculation.

Let’s put things in perspective. Here are the data for the past 1,200 years. It seems that “megadroughts” have occurred naturally, without any human influence.

These data show that the 20th century was wetter than normal. However, the next graph shows that there have been droughts. But, rather that entering a megadrought, we seem to be emerging from a dryer period according to NOAA. 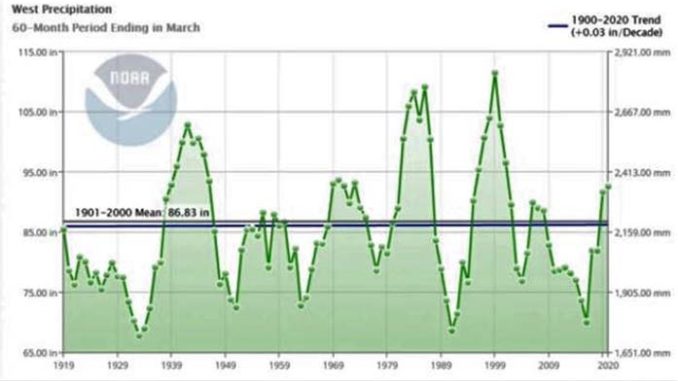 The graph above comes from a 4-minute video posted by Tony Heller, on his “Real Climate Science” blog. This video destroys claims that the western United States is currently experiencing a nearly unprecedented megadrought.

From Science Realism: No, Warming Is Not Causing a Megadrought in the U.S. West