PHOENIX – At this point, hockey players have come up with just about every creative way to manage their time while quarantined during the COVID-19 pandemic.

Rollerblading? Tried it. In-home gyms? Everybody has one. Doing squats while using the family dog as weight? Check.

But Kyle Aucoin, 17, a top NHL prospect whose father is former Coyotes player Adrian Aucoin, is taking advantage of the unexpected break to spend time – and work out – with family.

“He might be at an advantage because he’s with me every day, as opposed to some of these kids who are quarantined and can’t do anything,” said Adrian, 46. “We’re lucky we have a gym at our house. He’s got two younger brothers that want to shoot pucks, play basketball, lacrosse and football. Every day he’s doing something.

“I honestly think it’s kind of funny. I think he’s already almost grown an inch since he’s been home and probably put on a few pounds just from relaxing a little bit and doing (workouts) specifically.”

Kyle is considered an elite NHL prospect for the Tri-City Storm of the United States Hockey League and, like his father, is a defenseman. Although he doesn’t have an ice rink at his disposal, he has found ways to work out at home with his dad and two younger brothers, Kaden and Cameron.

Adrian has coached the three boys throughout their youth, but this is something different.

It wasn’t long ago that the Storm were sitting in fourth place in the USHL’s Western Conference standings. However, concern over the fast-spreading coronavirus that causes COVID-19 was growing quickly. On March 12, the league postponed the season.

Only six days later, the USHL pulled the plug entirely, canceling the remainder of the season. The Storm finished 24-17-5-2.

“We were on a road trip headed down to Fargo, North Dakota, to play the Force,” Kyle said. “We were only about an hour into the trip when the bus turned around. We were kind of confused, so we started texting guys from other teams in the league to see what was going on because recently USA (Hockey) had just canceled their nationals.”

Word spread almost as quickly as the virus. The players on the Storm’s bus soon knew their fate.

“We ended up unpacking the bus and just waited in the players lounge for a while,” Kyle said. “The coaches came in and told us the news. Everyone was pretty upset, but they were honest with us: ‘We don’t know when this will end or what’s going to happen.’”

The players were given strict instructions – no practicing as a team and no workouts as a team. They had the option to stay and live with their host families or return home. Kyle chose the latter.

“My dad was the first person I called,” he said. “I let him know, and obviously he was upset. But in the end, he was happy the whole family is home and safe together fighting through this.” 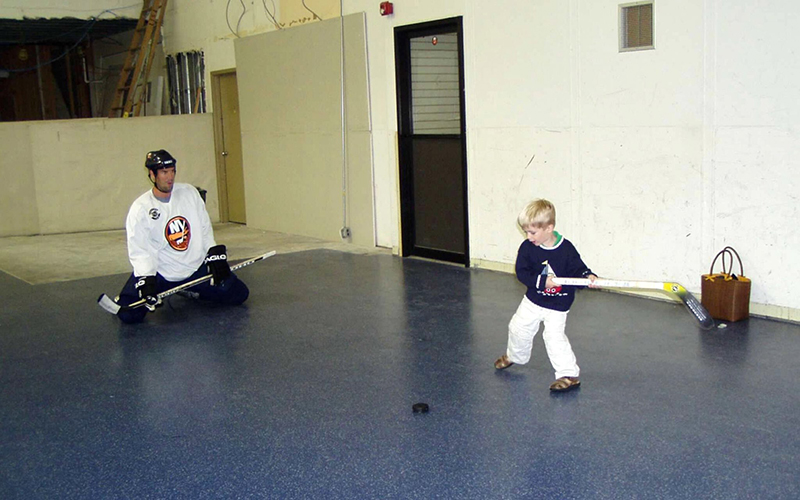 Kyle Aucoin has worked out with his father, former Coyotes defenseman Adrian Aucoin, for most of his 17 years. (Photo courtesy Kyle Aucoin)

With the family of hockey players living under one roof again in their native Hinsdale, Illinois, Adrian, who retired from the NHL in 2013 after 18 seasons, is happy to take on a coaching role again.

His son is a 5-foot-11, 163-pound standout who has committed to play at Harvard and is among the rising youth hockey stars in the USHL. He is a two-time USA Hockey Tier I national champion with the U16 Chicago Mission team and is rated among the Top 160 players in Central Scouting’s final rankings for the 2020 NHL Draft.

On March 25, the NHL postponed the 2020 NHL Draft scheduled to take place in Montreal, Quebec, June 26-27 along with the June 1-6 2020 NHL Scouting Combine in Las Vegas. The NHL announced that the timing and format would be determined at a later date.

It all has left many in the USHL and other leagues questioning whether they will play hockey again this year.

The possibility of no more hockey is not a surprise to Kyle. But the prospect of going months without ice time has given him a new appreciation for what his dad is experiencing in retirement.

It has given Kyle valuable perspective as he tackles the uncertainty ahead with a positive attitude.

“When I was in Nebraska playing juniors, or living at home now, there’s always ways to find knowledge,” he said. “You just have to be ready to take it in and use it whenever you can.

“In the end, I think that will make you a better person and will translate to your hockey game.”

About Cronkite News 2686 Articles
Cronkite News is the news division of Arizona PBS. The daily news products are produced by the Walter Cronkite School of Journalism and Mass Communication at Arizona State University.