An Open Letter to the voters of Arizona’s Legislative District 6 is raising questions about candidate Wendy Rogers. Rogers, who has unsuccessfully sought multiple federal and state elected offices over the years, is challenging conservative Republican Sen. Sylvia Allen for a spot in the State Senate.

As with virtually all of Rogers’ races, this one has gotten ugly.

The letter includes some claims that are clearly in dispute. As an example, the letter claims that Rogers “lives is a 600 square foot mobile home in Flagstaff.” However, in an online article about the unsuccessful lawsuit Rogers filed against Allen, one anonymous poster claims Rogers’ home is one of many “fixed manufactured homes” in a retirement village.

As noted in the letter, Rogers claims two primary residence; the Flagstaff manufactured home and a large home in Tempe from where she ran her previous campaigns. Unlike the LD6 race, candidates for Congress do not have to live in the district of the seat they hope to fill.  But by law, Rogers must reside in LD6 for her current campaign, and that’s where her carpetbagger status enters into the picture.  Not only is Rogers’ home in Tempe, but her business is as well, and according to her campaign finance reports, Tempe is also home to her campaign. 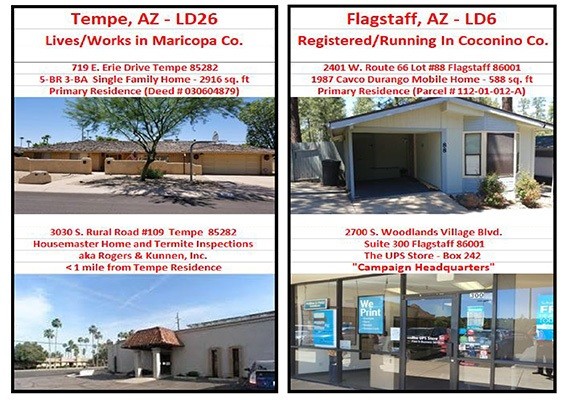 Rogers has told former supporters that she hopes a seat in the Arizona Senate will give her the credibility she needs to launch another federal-level campaign. A review of her social media accounts gives the impression that she has little interest the issues facing Arizonans on the state level. In fact, she has no mentions of activity by the Arizona Legislature in any social media platform.

That lack of interest may not matter to her mostly out-of-state donors.

Those donors have been more than generous, making the race one of the most expensive Arizona Senate races in the state’s history. That investment by Roger’s supporters has raised eyebrows and questions.

It won’t be the first time a Roger’s campaign raised eyebrows and questions. Open Secrets flagged her congressional campaign with their Anomaly Tracker due to the fact that over 50 percent of the money she raised went to a campaign consultant, Spencer Rogers.  Open Secrets reported that of the $1,410,207 spent by Rogers, an eye-popping $818,808 went to Spencer Rogers.

The stakes are high though, so no one should really be surprised by the enormous fundraising by Rogers. Knocking Allen off the Senate Education Committee would allow more moderate, pro-teachers’ union senators to take over.  Liberal interest groups have invested hundreds of thousands of dollars over the years trying to target Allen, so far unsuccessfully.

Rogers has slandered good Republicans candidates in races she has run and is currently the subject of pending civil lawsuit accusing her of defamation and invasion of privacy.  The lawsuit resulted from Rogers’ unfounded allegations of sex trafficking against her Republican opponent in our Congressional District primary election in 2018.  The Arizona Police Association held a press conference on August 9, 2018, in support of her opponent and Arizona Congressman Andy Biggs, former Arizona Congressman Matt Salmon, former Maricopa County Attorney (and now Arizona Supreme Court Judge) Bill Montgomery and Andrea Kadar, a Shared Hope International Ambassador, denounced Rogers’ sleazy, unfounded attacks.

Rogers claims her residence is a 600 square foot mobile home in Flagstaff; however, a search of Maricopa County property records reveals she owns in a 2,900 square foot home in Tempe which she has owned since 1996.  This “primary” residence, according to Maricopa County property tax records, is less than a mile from her home inspection business on Rural Road also in Tempe.  Why does where she lives matter?  Arizona Revised Statute requires a candidate for legislative office live in the District they are running to represent.  In Rogers’ case, she lives in Arizona’s Legislative District 26, but is running in Legislative District 6.  All three incumbent legislators in Legislative District 26 are Democrats. When Rogers was asked why she would not run in her “home” District, she responded she could not win there.  Rogers does not understand our unique water, forest, ranching, access to public lands and recreation issues in rural northern Arizona and Legislative District 6.

Rogers’ most recent campaign finance report raises many questions.  Rogers has raised more than $400,000 for an Arizona State Senate race.  Rogers’ campaign donations represent 15% of all the money raised by all candidates, more than $150,000 than the next closest candidate, and more the $250,000 raised by either the Arizona Speaker of the House and Arizona Senate President.  Is Rogers that good a campaign fund raiser for a state senate race?  Well, a deeper dive into her campaign finance report shows that almost 60% of her campaign contributions come from out of state donors and more than 80% of her contributions come from Arizona donors who do not live in Legislative District 6.  The question is why donors would who do not live in Arizona or do not live in the District contribute money to Rogers’ campaign for a state legislative seat that pays $24,000 a year.

And what has the Rogers’ campaign done with all that money?  Her campaign has already spent $175,000 with $124,000 or 70% paid to Go Right Strategies, Inc. of Orange Park, Florida for campaign mailings.  It also appears that Rogers’ campaign has likely used campaign dollars to hire the law firm Snell & Wilmer to challenge Allen’s petition signatures in court last week.  Allen had almost twice as many valid signatures as required and the judge threw out Rogers’ challenge. Rodgers uses intimidation as a campaign tactic.

Rogers claims to be a staunch Trump supporter, yet she not only endorsed Jeb Bush during the 2016 campaign but was a financial booster and Arizona fundraising “bundler” for Bush.  When Bush’s campaign flamed out, Rogers switched her allegiance to Ted Cruz.  It was not until Donald Trump become the presumptive nominee, did Rogers jumped on the Trump Train.  However, at the October 19, 2018 Trump rally in Mesa, President Trump introduced Arizona’s four Congressmen and its Senator, but did not acknowledge Rogers, who was in attendance.