AVONDALE — Before this year, NASCAR crowned Cup champions in Miami, home of sunny skies and crowded beaches. This year the crown jewel of the series finished in the desert, amid the COVID-19 pandemic.

Jim Campbell, who represented Chevrolet and Chase Elliott’s winning car, said it was great to see fans in the stands for Sunday’s season finale.

“I’ll tell you when Chase got to the lead it was fun to see the reaction from the stands,” Campbell said. “There were a lot of Chase Elliott fans out there today.”

Elliott, who at 24 became the third-youngest Cup Series champion, said the atmosphere was different, but the track to victory remained the same.
“Certainly a strange year and a different outlook,” he said. “But when it comes down to it when all people clear off pit road, it dwindles down to the drivers and their cars.”

The raceway permitted about 8,400 fans spread across the 42,000 seats. Masks were required in common areas, but spectators were able to use their discretion at their seats and while sitting at the distanced infield tables, a Phoenix Raceway employee said.

Signs reminding race-goers to socially distance and wear a mask were displayed all over the venue. Some employees held up the same signs for continual adherence to protocols. 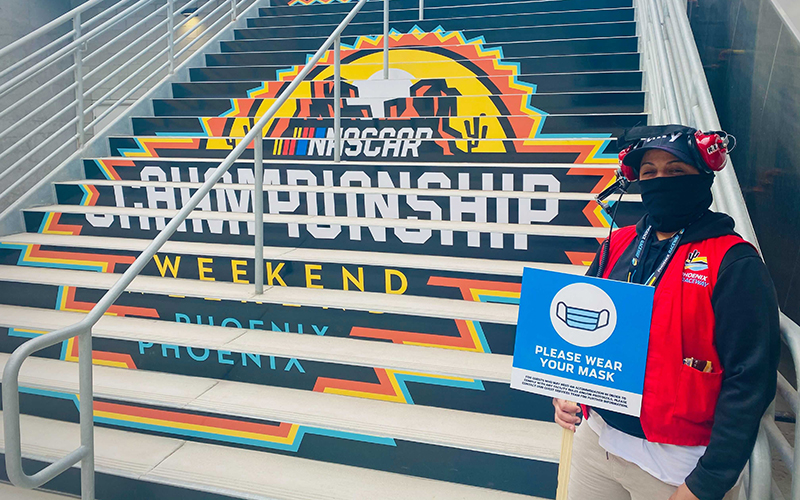 The event was the largest attended sporting event in Arizona since March when the pandemic started to spread nationally, temporarily shuttering leagues and canceling games.

On Sunday, about 14 miles from the track, the Cardinals allowed over 4,000 fans for their game against Miami at State Farm Stadium in Glendale. COVID-19 cases in the state have been steadily increasing with 2,030 new cases and 36 deaths reported Wednesday, according to the Arizona Department of Health Services.

Regardless of the uptick in cases, racing fans eagerly flocked to the Avondale track.

Lynne Masoner and Ron Blake, both Chandler natives, said they’re hardcore racing fans. They were coming one way or another.

They attend every event when NASCAR comes to town, but said this one looked very different.

“It’s kind of eerie. It’s kind of a double-edged sword,” Masoner said. “It’s nice to not have to deal with the crowd so much, but on the other hand the crowds create quite an experience.”

In the past, Blake would send photos of the packed 40,000-plus stands to friends and family who live in towns with smaller populations, and he’d laugh at the shocked responses.

Joey Logano, the 2018 Cup champion, said NASCAR deserves a lot of credit for finishing out the season in such an odd year.

“Being able to come together in a year where everyone feels so separated in ways, I feel like we were united more than ever,” said Logano, who finished third in the race. “So I think there’s a lot to be proud of there.”

When Blake and Masoner first met they didn’t know they were both racing fans, but it’s turned into an integral part of their relationship, Blake said.

Their birthdays fall around Phoenix’s two NASCAR weekends, so they always gift each other tickets instead of traditional presents.

“When NASCAR season’s over we’re like, OK, what are we gonna do today?” Masoner said. 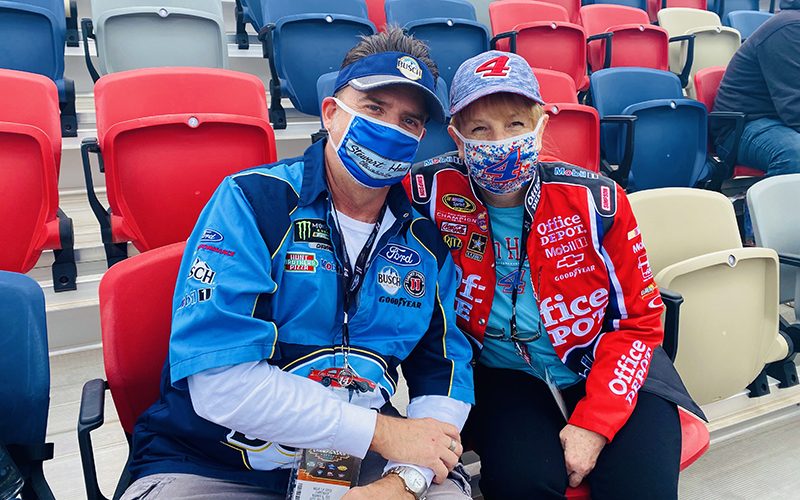 Fans Ron Blake and Lynne Masoner were excited to attend NASCAR’s 2020 Cup Championship at Phoenix Raceway, even with the unique surroundings because of COVID-19. (Photo by Amna Subhan / Cronkite News)

While the two are Valley residents, other fans trekked across the country to watch the conclusion of this unusual season. Diane Stewart and her son Joaquin, 12, traveled from Discovery Beach, California, to be a part of the action.

“He told me at 2 years old he wanted to be a race car driver,” she said. “He knows everything about NASCAR. This is a dream come true.”

Joaquin said he’s drawn to racing because of the adrenaline. The cost of the resale tickets landed upwards of $500 each, nearly derailing their trip to Phoenix, until Stewart hit the jackpot playing bingo.

“I went and played bingo and won $1,000. He got his championship tickets,” Stewart said.

Joaquin said it meant a lot to be there in person. He’s a big fan of Bubba Wallace and Denny Hamlin, both a part of basketball legend Michael Jordan’s racing team.

Hamlin finished fourth Sunday. He said he enjoyed having different scenery for the weekend, and would like to see the championship move from city to city like the Super Bowl.

“We always have had great crowds here, no matter what’s going on,” he said. “Phoenix Raceway invested money into the fan experience and any track that does that deserves to have a big race.”

A lot of the fan amenities remained despite the circumstances.

The tradition of camping was modified. The facility required all vehicles to park in the same direction with the entryway facing left to allow ample distance between each space. The maximum number of guests was limited to six, preventing large crowds.

Instead of concerts performed in the middle of the track, NASCAR held a Facebook Live concert featuring Christopher Shayne and Harry Luge.

Johnson raced in his final Cup championship Sunday, closing out his storied NASCAR career in an atypical year.

In July, Johnson and his wife Chandra tested positive for COVID-19, and he missed the first race of his Cup career.

It meant a lot to Johnson to have his family by his side at the first race since Fontana, California, in early March, before the virus was declared a pandemic by the World Health Organization.

“That was everything,” Johnson said. “Once I knew we were gonna have fans at the track, I felt like the chances were high and very thankful I was able to have them here.”

While it wasn’t the weekend Phoenix envisioned when NASCAR named it the host of the 2020 Cup championship, Elliott still crossed the finish line as the victor in Avondale, burning rubber in celebration with over 8,000 fans.

“For me, it’s unbelievable,” the 2020 champion said. “I’m not sure I could have sat down and drawn it up any better.”