PHOENIX – Mandatory masks. A fog of disinfectant sprayed throughout the gym before and after the game. Socially distant seating in the stands. Temperature checks at the door.

This is high school basketball in a pandemic.

It wasn’t normal. But it was still the same sport. And when Mountain Pointe and Corona del Sol tipped off Friday in Ahwatukee Foothills, the game felt largely familiar.

Players’ masks regularly fell down during gameplay, but they were usually replaced soon, sometimes after a stern reminder from a spectator.

More than anything, those on the hardwood were happy just to be playing after winter sports were temporarily canceled by the Arizona Interscholastic Association just weeks earlier. But following backlash from parents, coaches and students, the AIA executive board reversed its decision and approved the basketball, wrestling and soccer seasons.

After the buzzer sounded on Mountain Pointe’s first home game, the athletes shared why it was so important to return to the court this year.

“I feel like especially me, it being my senior year, I definitely don’t want to watch something like COVID just take it away,” senior point guard Jason Kimbrough said. “And then I may end up having to go find a prep school to go play for. I didn’t want to do all that.”

Sophomore guard Tru Washington, a likely high-major college prospect, said it was important for all players, but especially seniors, to have an opportunity to showcase their talents and earn opportunities to play in college. 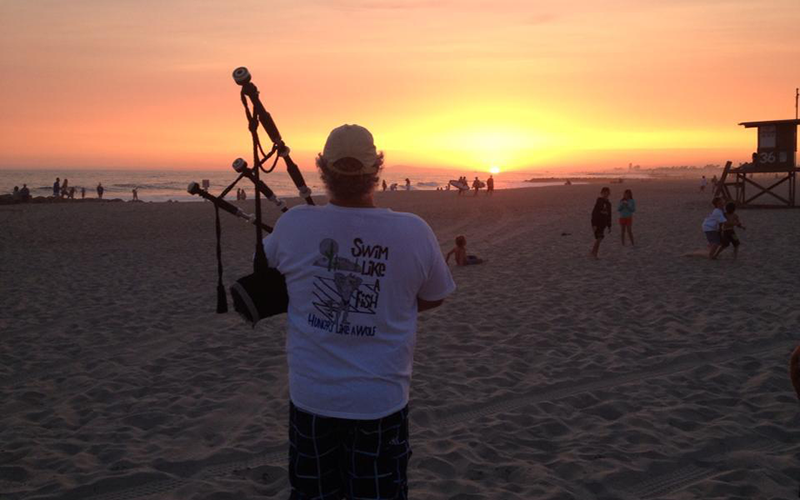 “If COVID would have taken away our season, it would have been bad on the seniors,” Washington said. “Everybody needs exposure. We needed a season.”

While his personal goals played a role in his desire to return to the court, Kimbrough said the ability to play with his childhood friends also influenced him.

Mountain Point coach Kaimarr Price said he was happiest for the seniors to be able to take the floor. It was the biggest reason he was glad the AIA allowed basketball to start.

“They’ve been loyal with this program for four years,” Price said. “They’ve been through a lot of change, they’ve been through three different coaching staffs now. And for them to have built this program to the point where it is now to where we should be able to win the first state championship (in Mountain Pointe history), to for a second there see it as they wouldn’t be able to finish their goal was just devastating.

“But I’m glad we’re back playing now and got a great group of guys and everybody plays for each other.”

The game itself was a rout. Mountain Pointe demonstrated why it is the likely favorite in the 6A conference this year, showcasing improved depth in an 82-61 win.

Senior forward Zereoue Williams contributed 12 points in the Pride’s win. Williams, who committed to Utah for football in the fall and signed with the Utes in December, didn’t have to return to the floor with his teammates. His collegiate future is set.

But he chose to play because he wants to help lead them to Mountain Pointe’s first state title.

“I just want to do it for them. I want to see the people around me, especially my brothers, to succeed,” Williams said. “Because I want to take them with me, because I can’t be a leader out on the floor if I’m just bossing everybody around and just doing it all for me. I got to do it for everybody else around me.”

Williams said playing with a mask has made that pursuit more challenging.

“It’s definitely new. It’s also been kind of challenging, because we’re adjusting to wearing the masks and we haven’t had to wear a mask our entire lives during basketball,” he said. “It’s actually kind of rough. I’ve been wheezing out there and I’d like to consider myself pretty good in shape.” 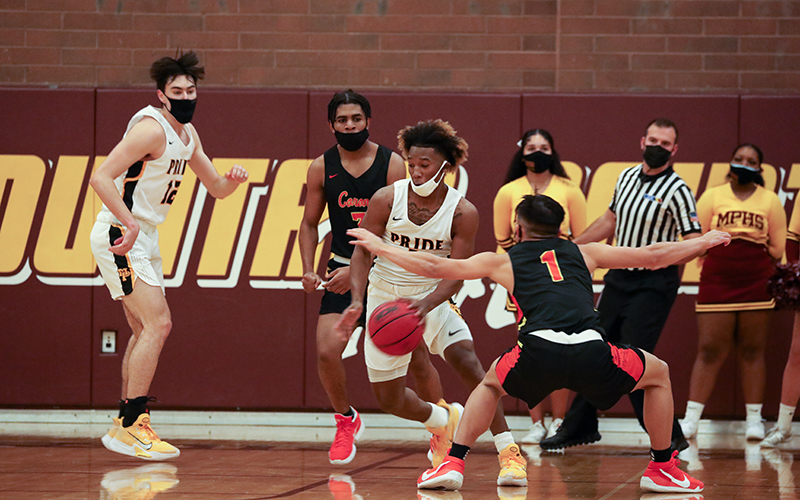 Mountain Pointe point guard Mark Brown and his teammates were just happy to play in a game again, despite the challenges COVID-19 restrictions presented. (Photo by Alina Nelson/Cronkite News)

Though wearing masks during games presents a new challenge for teams in the AIA, Kimbrough noted it is a challenge Mountain Pointe is more prepared for than most.

“Now that we’ve been practicing so much with wearing a mask and stuff like that, it kind of doesn’t even bother us to a point,” Kimbrough said. “I feel like we may get a little bit more tired, but I still feel like we’re the best conditioned team in the state. So it’s almost like not having one with us.

“I heard that other schools just started using masks. Whether it’s practices or games, we’ve been doing it for so long that I feel like that gives us an advantage right before tipoff even starts.”

Price said Mountain Pointe made the decision to practice with masks after the Tempe Union High School District consulted with officials at Banner Health, including Dr. Amy Jo Overlin.

“Our trainers are contracted through Banner Health, and Dr. Overlin has a higher standard of safety than most districts,” Price said. “So we’ve had to practice with masks the entire time.”

Despite all the precautions, Price knows the state of the season is precarious and could change at any time.

“Seeing certain teams get shut down already and we’re in the first week of (the) season, I don’t think in football it was this widespread where I read about teams getting shut down,” Price said. “But you look at, I think it was Saguaro who got it right before playoffs and had to forfeit (the) playoff season. So you could play all season and do all this for nothing.

“But it gives the kids a chance to do what they love and chase what they’ve been working for for four years, some of them. So I’m on board with it.”

When the winter sports season was initially canceled, Price used Twitter to try and find opponents for his team to play. With the season reinstated, he expressed doubt that he would do the same if games were called off again.

“Probably not. We’d meet as a team, kind of see what they wanted to do,” Price said. “I have an almost 4-month-old at home. A big reason why I’m more or less comfortable playing a season is because of the protocols we have in place. Are they perfect? No, but they’re something.

“If you go to a club season, it’s a lot more relaxed. There’s no governing body to really enforce anything, so you really don’t know. And at that point, you’ve got to ask yourself, is it worth it from a family standpoint?”

While the dangers of COVID-19 always lurk, so too do the dangers of injury, something Mountain Pointe was reminded of on Friday. Starting guard Mark Brown sprained his ankle and will be out “a while,” Price said. Key bench piece Anthony Jaramillo also left the game with a knee injury.

Just another challenge in this season unlike any other.