It would be fair to say that going into this season, or even the NCAA Women’s Basketball Tournament, not many people would have expected Arizona, a No. 3 seed, to have an opportunity to win a national title with one shot Sunday.

Despite shooting 28.8% from the field as a team, receiving a quieter-than-usual day from senior guard Aari McDonald and facing a juggernaut of an opponent in No. 1 seed Stanford, the Wildcats had exactly that.

One shot to win it all.

Junior guard Shaina Pellington inbounded the ball to McDonald – as everyone expected – and placed the fate of the game in her hands. The Cardinal defense swarmed McDonald, sending a triple team that forced a turn-around, desperation heave from the top of the key as time expired.

The ball clanked off the back iron and Stanford began celebrating a 54-53 victory and its first national championship in 29 years. The Wildcats didn’t come away with a title Sunday night, but the journey to the Final Four and their performance in the championship game was a victory in itself.

“We’re leaving San Antonio with a lot of pride,” McDonald said. “We’re going to walk out of here and leave with our heads up just knowing how far we came, how far we’ve come as a program and as individuals.”

Arizona’s run in the tournament launched them from relative anonymity just a couple of weeks ago to one of the biggest stories in the sports world.

One by one, the Wildcats systematically and soundly knocked off high-seeded opponents like Texas A&M, Indiana and powerful Connecticut. In fact, their most competitive matchup before the title game was a six-point victory over No. 11 seed Brigham Young in the second round. 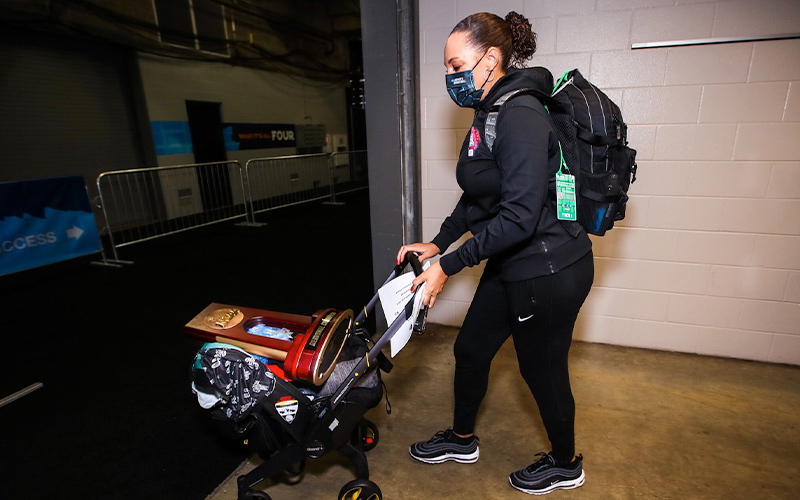 The Wildcats weren’t only at a disadvantage with their seed, either. According to data collected from the U.S Department of Education’s Equity in Athletics Data Analysis, UArizona women’s basketball expenses between July 2018 and June 2019 ranked 15th among the Sweet 16 teams in this year’s tournament. And among all 64 tournament teams, the Wildcats ranked 36th.

They did more with less.

The numbers on paper didn’t bode well for Arizona’s chances at a deep run in the tournament, but the Wildcats went on one, anyway.

Throughout their hot streak and as the national attention rose, the Wildcats were unapologetic for feeling they had earned their spot. A since-deleted NCAA promo video for the Final Four turned out to be a Final Three – it didn’t include Arizona. Perhaps motivated by the slight, the Wildcats stunned Associated Press Player of the Year Paige Bueckers and the Connecticut Huskies in a national semifinal.

Television cameras spotted coach Adia Barnes in a huddle postgame, giving the middle finger to the team’s doubters while addressing her team, which went wild with excitement over the win and their coach’s gesture.

Barnes said later that she thought the huddle was more intimate, but she made no apologies.

“It’s what I felt with my team at the moment, and I wouldn’t take it back,” Barnes said Saturday. “We’ve gone to war together. We looked around the room, and we looked around the circle and we believe in each other. So I’m in those moments, and that’s how I am. So I don’t apologize for doing that.”

Maybe most important of all, Arizona’s women’s basketball program built a name for itself in the tournament. Basketball fans know the names Adia Barnes and Aari McDonald now. Even though McDonald will leave school to play professionally, she leaves a permanent mark on the program.

“I love her game, and I love the way she plays,” said Arizona senior forward Sam Thomas. “Being a captain with her, it’s been the most fun I’ve ever had. She’s helped me grow as a person. I’m so excited to see what she does at the next level, and I’m just going to be her No. 1 fan from here on out.”

Thomas will still be around next year to help build on the momentum the program has gained. In a Tweet and at the team’s welcome home celebration Monday, Thomas announced her intentions to return for her fifth year of eligibility, which players have been granted by the NCAA because of the COVID-19 pandemic.

I mean why not come back🤷🏽‍♀️ See you next year Wildcat Nation #BearDown pic.twitter.com/xX5VMTdfF3

Even though men’s basketball has reigned supreme at Arizona, particularly during the tenure of the late Lute Olson and under current coach Sean Miller, Barnes is building the foundation of another great basketball program.

A loss in the national championship may be disappointing, but Arizona’s run is symbolic of the upward trend in the program.

The Wildcats certainly proved they don’t go away quietly.

“The standard is high once you come this far,” Barnes said. “Once you’ve had success like this, you reach for the sky. So you fight a little bit more.”