PHOENIX – When the COVID-19 pandemic rolled from spring to fall in 2020, it put college football seasons at every level in doubt.

Fortunately for Arizona Christian University, a small Glendale-based school that competes at the NAIA level, there were options to get the most out of what might have been a lost season.

The NAIA initially gave teams the choice to play part of their seasons in the fall, the spring or a combination. ACU President Len Munsil voted to play the entirety of the season in the fall. However, the NAIA decided to play league games in the spring while allowing programs to play a fall non-conference schedule.

The thought of a fall without Firestorm football, which goes beyond just Saturday entertainment at the school, wasn’t appealing to Munsil or the ACU community.

ACU has a unique and rich history. It was founded in 1960 as Southwestern Conservative Baptist Bible College in North Phoenix. It underwent several name changes before becoming Arizona Christian in January 2011 to address its change from a small Bible college to a Christian liberal arts university.

In 2019 it relocated to Glendale and took over the site of ASU’s Thunderbird School of Global Management. The site better served its growing enrollment – now close to 900 – and burgeoning sports program, including football, which was added in 2014.

The addition of the sport served a state which has just three Division I football programs and two at the NAIA level. Many of the programs at the junior college level have been wiped out because of state budget cuts, although the Hohokam Junior College Athletic Conference helped bring some competition at that level back.

At ACU, it has become part of the school’s identity. And its profile is growing. Recently, kicker Nestor “Manny” Higuera, a 5-foot-5, 275-pound former soccer goalie, has become a social media viral sensation after someone replaced a football with a salad in a photo of him kicking a game-winning field goal. “The caption was like, ‘F salad.’ It was hilarious,” Higuera told The Athletic. 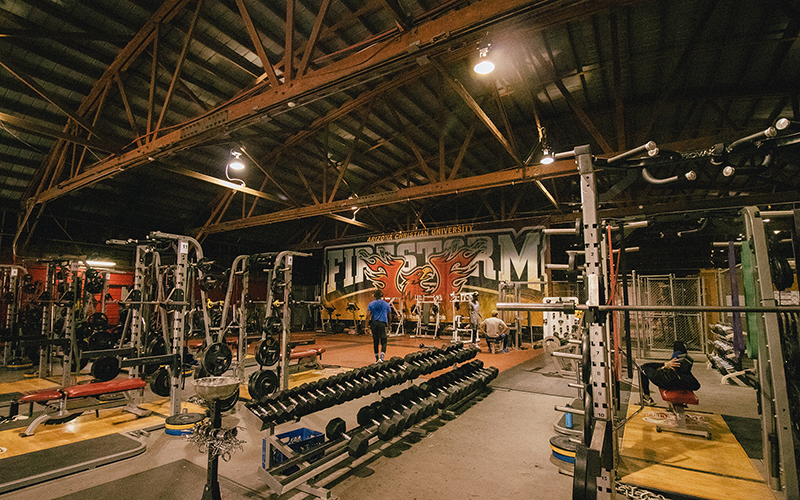 Staying in shape was key for Firestorm football during their schedule break. This was the most unique football seasons in recent memory, and keeping in condition to both play in the fall and run it back in the spring tested ACU’s focus and drive. (Photo courtesy of Arizona Christian University)

Faith is an important part of the school’s identity, too.

“Because we are a Christian university, we emphasize spiritual commitment and growth,” Munsil said. “And the ACU football program has excelled in emphasizing Bible study, prayer and small group discipleship, leading to life transformation. The program has produced many spiritual leaders on campus.”

Additionally, Munsil said, “it has helped diversify our student population, which enhances the ACU experience for everyone.”

While the conference schedule had to wait, ACU jumped at the opportunity to play a non-conference slate in the fall and scheduled five opponents. The Firestorm played four of the games – one was canceled due to a COVID outbreak – and finished 3-1.

That “season” ended in November. Now, the Firestorm are back at it and have rolled through their spring schedule to clinch a spot in the NAIA playoffs.

Historically, the Firestorm tend to play in front of about 1,000 to 3,000 fans. They have, however, against NCAA Division II and Division I teams, competed in front of up to 20,000 fans.

The break in the Firestorm’s schedule went from November 7 to February 20. A November 14 game was canceled because of the outbreak.

“That part was kind of weird,” Bowen said. “It’s the longest season of my coaching career. So that part’s an adjustment, but our guys have handled it pretty well.”

The Firestorm are 5-0 in their six-game spring schedule, indicating that even that brief fall season has paid benefits during conference competition.

“We had high hopes coming into this season, even if we didn’t play (conference games) in the fall,” linebacker Anthony Nicastro said. “I think going from the fall season into this season, I was able to get more into shape. So it actually gave us that edge going into these next six games of ours.”

Nicastro began his career at Arizona State before joining the ACU program. In 2019, his first year at ACU, he racked up 40 tackles, returned an interception for a touchdown, and had 2.5 sacks in 10 games. This year, he has made 38 tackles, recorded four sacks and recovered a pair of fumbles through nine games – spring and fall.

Finding his rhythm in Glendale, Nicastro said the pandemic brought its share of disappointment to him and his teammates.

“I feel that it kind of scared a lot of kids, especially our seniors,” Nicastro said. “You don’t play this game unless you want to get to the highest level. And unfortunately at the position we’re in right now, with COVID and not being able to talk to scouts or anything like that, it’s kind of been really rough.”

Nicastro is in his sophomore season, so he still has time. And the NAIA, like other levels of college sports, is allowing athletes an additional year of eligibility because of the pandemic. Still, he said the situation is difficult for some of his teammates.

“You could kind of see players have been down a little bit, especially a lot of the older guys,” Nicastro said. “So a lot of it is just trying to look for a way to get out and hopefully get that pro chance. And not being able to do that with COVID, it’s kind of been tough.”

While the split schedule has impacted the football lives of ACU’s players and coaches, it also has had an impact on their personal lives, especially members of the coaching staff who contracted the virus.

Defensive Coordinator Keith Sewell was one of them.

“I wasn’t stressed about it, even though I did contract COVID,” Sewell said. “That happened November 11th for me. So I had my 14 days of COVID isolation. My whole family got it, so it’s real.”

“I had every symptom,” Sewell said. “Our head coach (Bowen) got it, and he didn’t have any symptoms. And we all caught it in the same week. I don’t know where we got it from, but it went through the coaching staff.”

Luckily for the Firestorm, Sewell said he had very few players test positive, and he believes that none of them had any symptoms.

“The contact tracing is what kills you, because everybody comes in contact,” he said. “Whether you’re sick or not, you’re out. So that’s where the hard part was. So our break came at a perfect time for us, actually.”

Since resuming its season in the spring, ACU has won its five games by an average margin of 18.6 points per game. Only Southwestern Assemblies of God University in Waxahachie, Texas, which the Firestorm defeated 23-20, has challenged the Firestorm during the spring.

Higuera’s 46-yard field goal as time expired lifted the Firestorm to that victory, clinching the Sooner Athletic Conference Championship and a bid to the NAIA National Championship playoffs for ACU.

The Firestorm finishes the regular season April 10 on the road against Wayland Baptist University.

For the Arizona Christian community, however, this season went deeper than wins and losses.

“Our goal was to keep everyone safe while providing the most normal college experience possible for our students under the circumstances,” Munsil said, “and we think we’ve done that.”