PHOENIX – Andrew Wiggins doesn’t want it. Monty Williams isn’t sure. And Herm Edwards already has it but thinks the decision should be left to the individual.

These diverging opinions about the COVID-19 vaccine hint at how life has changed since March of 2020, when the virus put the world on lockdown and threw sports at every level into chaos.

Since that time, sports have resumed but in an atypical fashion. But what once seemed like a plot from a science fiction novel is now reality, not just for Arizona franchises but for teams, clubs and leagues around the globe, forcing the sports world to face difficult decisions about the ethics of the vaccine and the complexities surrounding it.

The COVID-19 vaccine, three types of which are approved for use in the United States, is going into arms around the planet, and it is a potential game changer in sports.

As of April 7, over 108 million Americans have taken at least one shot of the coronavirus vaccine while more than 63 million others have already been fully vaccinated, according to the Centers for Disease Control and Prevention (CDC).

However, none of the four major North American professional sports leagues – the NBA, NFL, MLB and NHL – require athletes or team personnel to take the COVID-19 vaccine. The NCAA has yet to implement a vaccine requirement either, and Arizona’s four state universities – Arizona State, the University of Arizona, Grand Canyon and Northern Arizona – do not require athletes to take it.

Shawn Klein, a lecturer in philosophy at ASU who specializes in sports ethics, theorizes that this decision has been influenced by a variety of factors.

“(The leagues) announcing that they’re going to make it mandatory when there might be scarce resources, and (when) not everybody who might be on the most prioritized level has been able to get the vaccine yet, that might not look great,” Klein said.

Klein acknowledges that access to the vaccine has improved in recent weeks. But he adds that leagues may not require vaccinations because they are “just respecting the autonomy of the players to make that decision on their own, whether or not to get vaccinated and when to get vaccinated.”

Chris Paul, a Suns guard and the NBA Players Association’s president, doesn’t believe that a vaccination requirement in the NBA is coming anytime soon.

“We’re a players’ association, we’re a union. But there are things that are personal to every player. We’ll keep talking about it as a union, as players or whatnot. But I don’t see any mandate coming and enforcing someone to do something,” Paul said prior to the NBA All-Star game.

In the meantime, athletes, coaches and trainers have already started receiving their doses of the vaccine. The Los Angeles Lakers, Portland Trailblazers, St. Louis Cardinals, Tampa Bay Lightning and Houston Astros are among the variety of professional sports teams which have received doses of the vaccine.

On March 23, players and coaches from the Arizona Diamondbacks volunteered at a local vaccination site, as volunteers from the team also received their first doses of the vaccine on site.

I asked Lovullo about vaccinations, and a number of players (8-10) are volunteering today and getting vaccinated. He’s proud of them for doing that the way the general population is able to do it as well.

Washington Nationals pitcher Max Scherzer is among the contingent of athletes looking forward to getting his vaccine.

“I tend to follow science. I try to listen to what the scientists say, what the experts say. So for me, I see a benefit in it and I can’t wait to get it,” Scherzer said on a zoom call with reporters on Monday.

Meanwhile at the collegiate level, ASU football coach Herm Edwards, who was infected with COVID-19 in November, is fully vaccinated. And in March at a men’s college gymnastics meet, Illinois sophomore Evan Manivong pulled his COVID-19 vaccination card out of his singlet after sticking the landing on a vault, a moment caught on video that quickly went viral.

It’s my vaccination card… go get vaccinated everyone! https://t.co/Of7IE0QvXj

But not all members of the sports world have been as willing to receive their doses. Golden State Warriors forward Wiggins and Philadelphia 76ers center Dwight Howard, among others, have expressed skepticism about getting a vaccine. And when asked whether he would be willing to take the vaccine, Williams, the Phoenix Suns coach, was hesitant in making a decision either way.

“For me, it’s not just me. It’s me and my family. I can’t do anything that’s going to keep me or put me in a position where I can’t take care of my family or that puts me in a position that I’m not well. So I have to get more information before I can say, ‘Yay or Nay,’” Williams said in December when asked about potentially getting the vaccine.

Klein believes that an athlete or coach’s motivation behind not taking the vaccine may be driven by a variety of factors. Religious reasons, unfamiliarity with the science behind the vaccine and “legitimately based” safety concerns were a few potential reasons he listed.

Michele Pavlu, the head athletic trainer at Nauset Regional High School and athletic training coordinator for the Cape Cod Baseball League, suspects that another potential reason that athletes may be hesitant to take the vaccine is its relative newness.

“It’s an emergency use authorization. So it’s new,” Pavlu said. “When something’s new, there’s always a heightened sense of nervousness about it.” 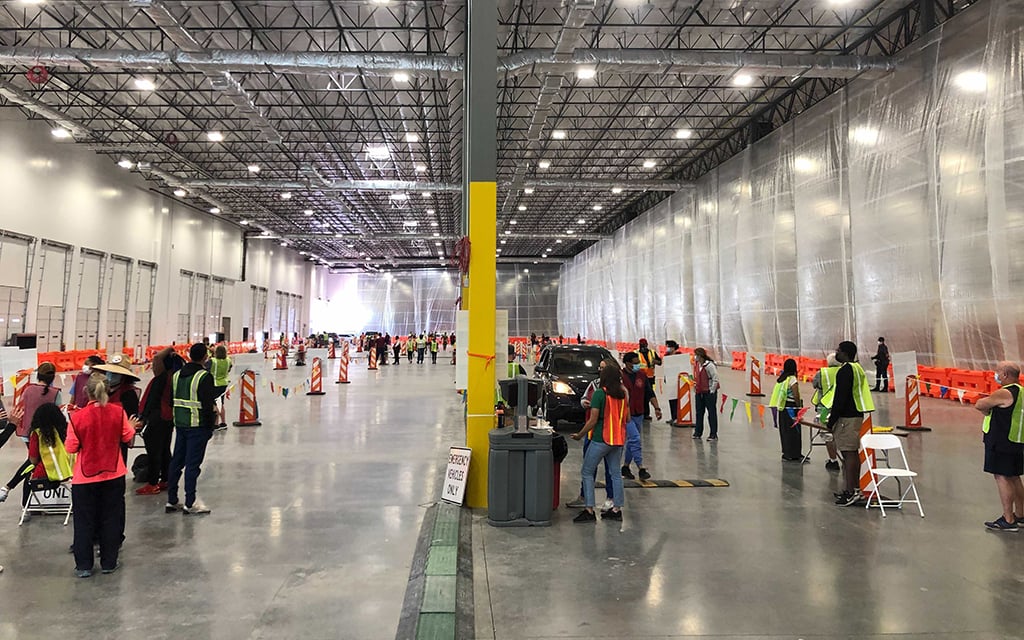 Among those hesitant to be vaccinated is Minnesota Lynx center Sylvia Fowles, as she worries about the potential long term effects the vaccine may have on her ability to bear children in the future.

“It’s kind of a sticky situation with me because I’m still unsure about the vaccine for myself for personal reasons,” Fowles said. “(I’m) just trying to weigh out my options at this point.”

But Fowles still believes that educating people about the vaccine, whether they play in the WNBA or not, is important despite not committing herself to receiving a shot. The league has been at the forefront of that educational push, says Seattle Storm guard Sue Bird.

Since the beginning of the year, the WNBA players union has hosted numerous Zoom calls with players and doctors about the content of the vaccine, Bird said. Players have been able to ask questions, with Bird declaring that the calls have “been super helpful, super educational.”

She added that race was a major factor in determining how to best educate players on the call about the vaccine, as many of the doctors who attended the Zoom meetings were Black.

“Communities of color are impacted disproportionately as far as COVID goes, and at the same time have a lot of mistrust as far as the vaccine goes,” Bird explained. “I think if you can break down some of those walls and barriers, and just educate people and let them make an educated choice … you want to make sure everyone is as educated as possible.”

And the WNBA is not the only professional sports league that has strived for educational outreach.

ESPN reported in February that NBA teams have held mandatory educational seminars about the vaccine with the league’s senior vice president of medical affairs, Dr. Leroy Sims. The NHL in late March partnered with the ad council and COVID Collaborative “It’s Up To You,” to help educate the public about the vaccine, joining 13 other professional sports leagues in the agreement.

In Arizona, Coyotes coach Rick Tocchet has encouraged his players to learn as much as they can about the vaccine before coming to any conclusions. Tocchet adds that he trusts the input of the team’s medical staff on the vaccine and that his players are receiving new information “almost daily” about it.

“I rely on those (medical staff) guys there. I ask them questions about it,” Tocchet said.

But educational outreach and talk about the vaccine at the collegiate level may be more complex, Klein said, noting that the unpaid relationship between college athletes and the schools they play for is more nuanced than in the professional sports world.

“I think it’s more just the relationship that student athletes who are not being paid directly remunerated, they don’t have a contract (like) professional (have),” Klein said. “The level of autonomy a professional has, in terms of treating (their sport) as their career and lifestyle is different (than) a college student who also has many demands on them.”

At ASU, Edwards believes it isn’t his right to direct athletes as to take the vaccine or avoid it.

“I stay in my lane when it comes to that,” Edwards said. “I just know my wife has the vaccine. Our son was in town. He got vaccinated and he’s gonna come back three weeks from now and get a second shot.”

The situation is complicated at the collegiate level as Madison Durocher can attest.

An undergraduate athletic training major at Ithaca College, Durocher mostly works with the men’s and women’s basketball teams. She is fully vaccinated for COVID-19, but the senior is still required to be tested for the virus twice a week, wear a surgical mask, have a face shield whenever she’s less than 6 feet away from an athlete and wear gloves if she’s touching someone in any way.

Durocher adds that she’s seen and heard similar protocols put in place at the collegiate level.

When the COVID-19 restrictions and protocols will fully come to an end is still anybody’s guess. But as more players, coaches and teams get vaccinated, more of COVID-19’s precautionary rules are abandoned because of it.

In MLB, the Cardinals have become the first publicly known team to have more than 85% of it’s players, coaches and personnel vaccinated, meaning that St. Louis players and staff can stop wearing masks in the bullpen and dugout areas and no longer have to wear contact tracing devices. Similar kinds of freedoms would be afforded to teams that hit the same threshold in the NBA.

NEWS: NBA and NBPA agree to eased restrictions for those in the league who have been fully vaccinated. Benefits include no longer having to quarantine following exposure to COVID-19, no longer having to wear masks at the practice facility and more. Story: https://t.co/uSuMVkP4cR

At the high school level, Pavlu adds that her athletes have been more eager to get vaccinated thanks to a recently loosened policy of the CDC in February, which states that athletes are no longer required to quarantine if they become in close contact with a person who tests positive for COVID-19 – as long as they remain asymptomatic.

This new incentive has been persuasive, but talking about the vaccine with her athletes still isn’t easy for Pavlu. Staying neutral and not showing any of her personal beliefs on the matter hasn’t been simple.

But when athletes ask Pavlu about the potential pitfalls of the vaccine, she shares this piece of advice.