Statistics released last week by the U.S. Department of Homeland Security confirm what federal, state, and local officials have been saying for weeks – the number of “encounters” with foreign nationals trying to come into the United States has skyrocketed compared to one year ago, up from 191,450 to 550,410. 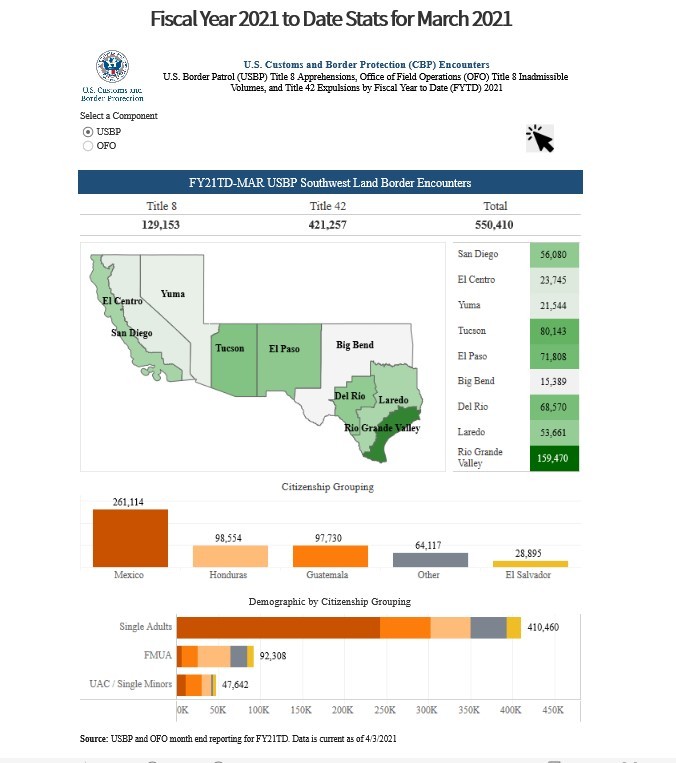 In the meantime, some federal law enforcement personnel are serving as whistleblowers to allege the government is running out of options for humanely and sanitarily processing the influx, particularly the 47,642 unaccompanied children, most of whom are from Guatemala and Honduras. Several hundred children have already been processed in Arizona, while a few hundred more are believed to be in temporary housing facilities in Cochise, Pima, and Maricopa counties.

The report issued by the U.S. Customs and Border Protection (CBP) for the fiscal year through the end of March shows that of the nine U.S. Border Patrol sectors along the southwest border, the Yuma Sector registered the highest one-year change of encounters, jumping from 4,604 to 21,544 persons, or 367.9 percent.

According to the report, the 550,410 encounters for the fiscal year to date included 129,153 apprehensions or determinations of inadmissibility by USBP and CBP’s Office of Field Operations. Apprehensions involve the temporary physical control or detainment of a person not lawfully in the U.S., while an inadmissible is someone encountered at a port of entry before being voluntarily or forcibly returned to their countries of origin within a short timeframe.

The remaining 421,257 individuals encounters are persons expelled to the country of last transit or their home country under Title 42’s public health orders.

Despite the influx of unaccompanied minors and family units reaching the border, almost 75 percent of all encounters involved individual adults, the report shows. Of those, the majority are Mexican nationals.

Several corporate social services companies in Arizona, including VisionQuest and Southwest Key, are contracted to provide short term housing for immigrant children until a sponsor or family member can be located.

Last week a 10-year-old Guatemalan boy at a VisionQuest facility in Benson climbed over a security fence and made his way to Interstate 10 before being located by local police. The youth was turned over to an Immigrations and Customs Enforcement (ICE) officer when VisionQuest would not accept the boy back at the facility.

Homeland Security Secretary Alejandro Mayorkas traveled from Washington DC to El Paso where he privately met with a group described by his office as “stakeholders and nongovernmental organizations working along the border, as well as sheriffs and local law enforcement partners.” He also met with Homeland Security employees in McAllen, home of the busiest USBP Sector.

Mayorkas did not make any public comments after his two meetings, while the Biden Administration has not provided local or state officials with a plan for how the immigrant surge will be handled, from housing to medical services to food and other needs for the children.