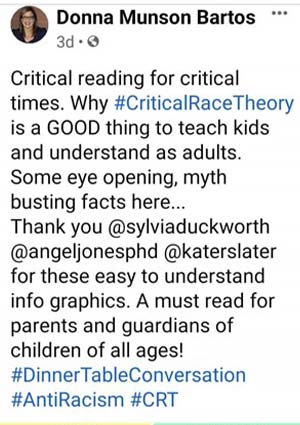 It wasn’t as much what she said that raised questions as to the ethical nature of her comments, but what she failed to say. Customarily vendors will identify themselves as such prior to addressing government bodies. This practice allows both the public and officials to put the speaker’s comments into context, allowing one to judge the validity and/or bias of the speaker as well as determine if they may have any conflicts-of-interests.

Bartos, whose organization has a contract for services with the District, only identified herself “a resident of Peoria and the mother of an incoming senior at Sunrise Mountain High School.”

According to Bloom 365 website, the company’s “goal is to educate and activate 10% of young people across the U.S. as Peer Advocates to #UprootAbuse by the year 2030. This #BHAG2030 requires everyone on our team to show up with grit, passion, focus and love.”

In the first and only readily available annual report from 2017, BLOOM 365 boasted that 42 percent of the students they have worked with have been “activated for social change.

Although virtually all of the biographies of staff click through to empty WIX pages, making any assessment of the qualifications of personnel impossible, the organization does declare that it does one day hope to go out of business:

Although our work with youth is hopeful, fun, inspiring and transformational, we look forward to the day when our services are no longer necessary.  The day we go out of business is the day when:

Together, we can realize this vision by investing in the potential of this generation of youth and the next to #UprootAbuse.

The small biography of Bartos describes her as a formerly engaging in “executive, consulting, fundraising, marketing and training capacities for non-profit human service, healthcare, DV/SA advocacy and higher education organizations.”

Peoria Unified School District documents show that BLOOM 365 was one of several vendors, including Corwin Press, awarded a contract for “STAFF DEVELOPMENT ABD LEADERSHIP TRAINING SERVICES” (ID# 19-04PV) for the 2020-2021 Fiscal Year. The document provides, as per statute, no specifics about actual costs -if any – or expected services.

Its 2019 tax return shows a total of $1,427,979 received since 2014 through “interest dividends, payments received on securities, rents, loans, royalties and income from similar sources.”

Members of the organization’s Governing Board are interesting, if not impressive. Unlike the staff page links, most of the links on the Board members’ page are live and lead to LinkedIn profiles. They include:

Jack Selby, Managing Director of Thiel Capitol. Selby recently was seated on the Board of Wick Communications. 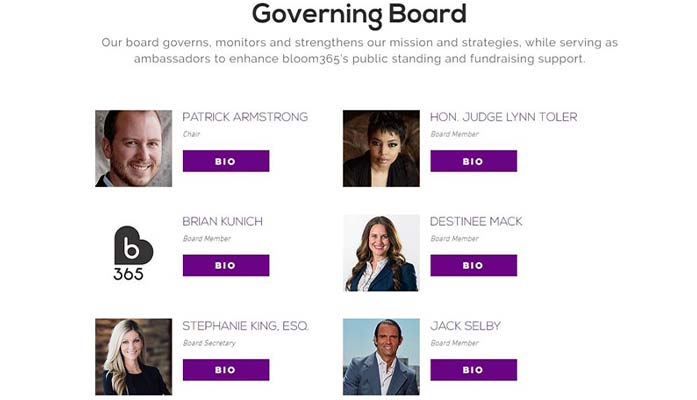 Of all the officers and directors listed on the Blue Ribbon Council To Cut Domestic Abuse Inc (DBA BLOOM 365) 2019 tax return, only Bartos received compensation. According to that tax return, Bartos was paid $57,598.00. The organization spent an additional $271,374 in “other salaries and wages.”

While critics say the mission of the organization is noble, they question the organization’s apparent philosophical leanings and reject curriculum associated with the politically tainted social emotional learning for grades K-12.

Despite growing opposition from parents across the country to politically tainted social emotional learning, BLOOM 365 is, according to its website, preparing curriculum for both third grade and kindergarten learners.

“It never ceases to amaze me how much time and money school districts are willing to expend on programs such as Bloom365, while they continue to cry poverty,” said former Superintendent of Public Instruction Diane Douglas. “They can’t manage to teach our children to read, write and do basic arithmetic but there is plenty of time and money to mess with their emotional wellbeing buying unproven programs.”

Douglas, who also served on the Peoria Governing Board prior to being elected to Arizona’s top education office told the ADI that she was “appalled that Ms. Bartos would deliberately mislead the governing board and not honestly disclose she is a vendor making money from the very programs she extolled.”