WASHINGTON – Protesters from both sides of the abortion issue rallied outside the Supreme Court Wednesday as justices considered a strict Mississippi law that could lead the court to reverse its longstanding abortion-rights rulings.

Justices appeared sympathetic to the Mississippi law that would ban most abortions after 15 weeks, in violation of the court’s current standard that recognizes a woman’s right to an abortion up to the time a fetus is viable outside the womb. That is generally considered to be around 24 weeks.

The newly conservative court is widely expected to restrict or reverse its landmark 1973 Roe v. Wade ruling that recognized that right. While it’s not clear what the court will ultimately decide, a reversal could mean Arizona returns to its pre-Roe abortion ban, one of 26 states with such laws still on the books, according to the Guttmacher Institute.

The case, Dobbs v. Jackson Women’s Health Organization, has drawn scores of briefs for and against, including filings Arizona. Briefs have come from the state itself, from 22 state legislators, most of the state’s congressional delegation, advocacy organizations and a number of pro and amateur women athletes. Many of them made their opinions clear Wednesday.

“Let me be clear where I stand: The Court MUST respect over 50 years of precedent and uphold the right to reproductive care. Anything else is a betrayal of basic human rights,” said Rep. Ruben Gallego, D-Phoenix, in a tweet Wednesday.

But in a video statement from outside the court, Rep. Andy Biggs, R-Gilbert, referring to the justices, said “these folks would do the right thing to protect human life and uphold the law that’s being challenged today.”

Justices spent much of the two-hour hearing questioning attorneys about the theory that courts should only overturn prior rulings in extreme circumstances, and asking why that should not apply in the case of Roe and other rulings. Roe was issued in 1973 and another case, Casey, that prohibited an undue burden on the right to a pre-viability abortion, was issued in 1992.

Justice Sonia Sotomayor said that rejecting decades of precedent could open the court to charges that it is making political, not legal, decisions, noting that authors of the Mississippi law pointed to the new conservative majority on the court as a reason for their bill.

“Will this institution survive the stench that this creates in the public perception that the Constitution and its reading are just political acts?” Sotomayor asked.

But other justices pointed to cases, like the school desegregation ruling in Brown v. Board of Education, that reversed precedent, or asked how they can draw a line to protect abortion when science is always advancing. Justice Brett Kavanaugh questioned whether the right to an abortion is even a constitutional issue for the court to decide.

“You’re arguing … that the Constitution is neither pro-life nor pro-choice on the question of abortion, but leaves the issue for the people of the states or perhaps Congress to resolve in the democratic process. Is that accurate?” Kavanaugh asked Mississippi Solicitor General Scott Stewart.

Outside the court, the arguments were more passionate. Protesters showed up hours before the start of the hearing and surrounded the court, competing with each other for attention and the last word. 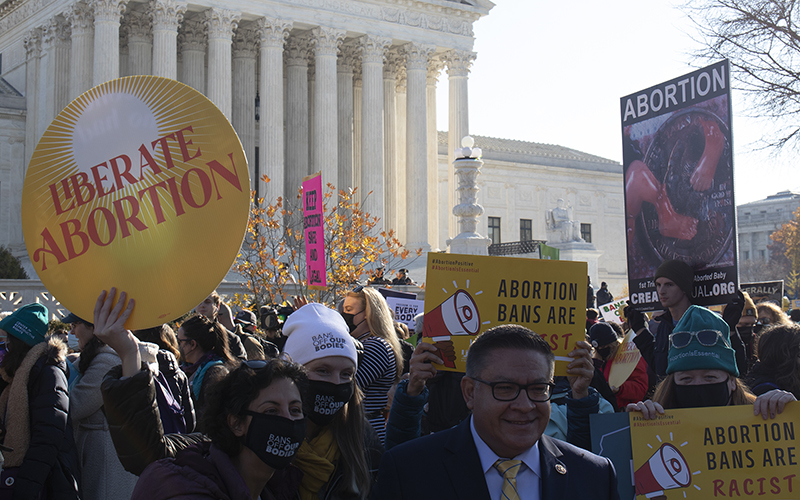 Anti-abortion protesters, who have been waiting decades for an end to Roe, easily outnumbered abortion-rights advocates. They sang and prayed and carried signs ranging from the emotional – “abortion is murder” with pictures of aborted fetuses – to the religious – “I am fully vaccinated in the blood of Jesus Christ” and specific Bible verses.

“Emotions are high, people have their reasons … everybody is passionate about their side,” said John Williams, a member of the Dayton Street Preachers, who came from Ohio for the rally.

Williams sees abortion as a moral and religious issue, that he believes life begins at conception and every life matters.

“Whether it’s my teenage daughter that gets raped, or whether it’s my wife that gets pregnant and we weren’t planning it, we don’t have the money for it, we believe what God says, that every life matters and that life begins at conception, and that thou shall not kill,” Williams said.

On the other side, a smaller but just as vocal group of abortion-right protesters from across the country shared personal stories of abortions and called on the court to defend a woman’s right to an abortion.

Hannah Hayes, who came from Michigan to rally for abortion rights, said she is part of the movement because she believes “that we should just be able to choose.” 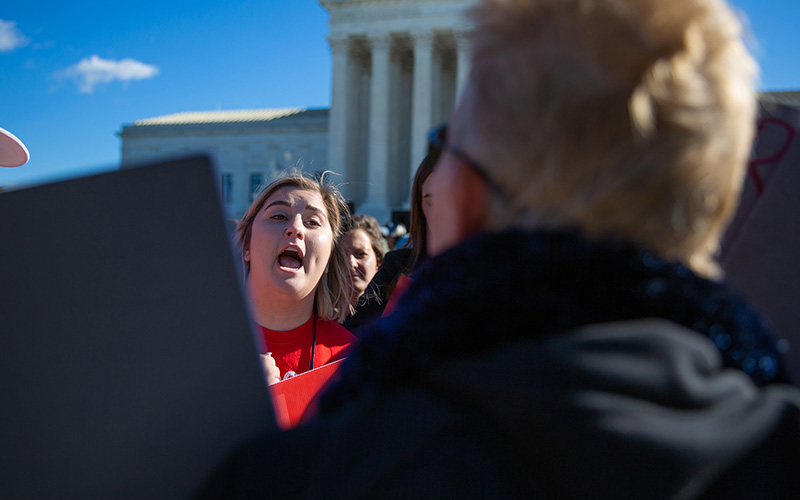 “I don’t really understand why it’s not the concern of other people what we do with our body and our lives,” Hayes said.

Abortion rights speakers took to a podium under banners that said “abortion is essential,” while those in the crowd carried signs with messages that included, “If men could give birth, we would not even be having this conversation,” and, “If you are against abortion, don’t get one!”

Tempers flared occasionally, but the protest was mostly peaceful, with scattered shouting back and forth as police looked on.

In addition to the Mississippi law, the court last month considered a Texas law that would virtually ban abortions in the state, setting the deadline for an abortion at six weeks of pregnancy.

Rulings in the cases are not likely until next year. But Arizona lawmakers have already made up their minds.

“Every unborn child must be protected and given the right to life,” said a tweet from Rep. Debbie Lesko, R-Peoria.

But Sen. Mark Kelly, D-Ariz., one of more than 200 members of Congress who filed a brief opposing the Mississippi law, tweeted that “Mississippi’s abortion ban is unconstitutional and a serious threat to reproductive freedom everywhere.”

“Roe v. Wade is the law of the land and it needs to stay that way,” Kelly said.