With conservative faculty members few and far between on university campuses, a group of Arizona State University students, College Republicans United, are hoping to find one to serve as their faculty advisor. The need for a new advisor stems from an unusual decision by University officials to narrow the advisor eligibility pool.

For over two years, Dr. Charles Loftus, a professor of Criminal Justice, acted as the group’s advisor. Loftus, with a Ph.D. in Public Administration from Arizona State University (ASU), is an instructor with the School of Criminology and Criminal Justice teaching counterterrorism, domestic terrorism, intelligence, and research methods. Despite his education and experience serving the Maricopa County Sheriff’s Office, ASU Police, the Arizona Attorney General’s Office and the Office of Inspector General at the Arizona Department of Economic Security, Loftus was deemed unqualified to serve as advisor by the University.

In early October, Julie Houtman, president of College Republicans United (CRU) was notified by  University staff that the group’s status had been frozen:

If you have recently found a new advisor they will need to complete the Advisor Training and Registration Part 2.  Please make sure to send me the updated information on your advisor (name, email address and ASURITE username) as soon as possible. Once your new advisor has completed the two steps your organization will be unfrozen.

If you are still searching for a new advisor and have any questions or need assistance, please let me know and we will work to assist you.

The students and Loftus were caught off guard. According to Houtman, “These ‘rules’ were changed over the summer but were worded in a way that made us believe we were not in need of a new advisor. We were informed 48 hours before the deadline that we did in fact need a new advisor.”

Although some on campus initially believed that the “freezing” was a result of the group’s support for Kyle Rittenhouse, the young man who killed two people in self-defense during the Kenosha riots, Houtman has a more nuanced view.

“ASU took our criticism and offered to give us a temporary faculty advisor until November 12th, which gives us another month of being an active club. I took this offer from ASU because I believe it is important to be an active club especially during the election season. So, as of right now we are back to being an official club until November 12th, so we are still actively looking for a faculty advisor.”

As Houtman and other conservative students know, it will be a daunting task to find an advisor who shares their world view, or at least find one that supports their right to hold that view.

Gallagher did not respond to requests for additional information.

Attacks on even moderate Republicans are sport on Arizona’s university campuses. From physical to psychological abuse in and out of the classrooms, conservative students endure nearly alone while progressive students enjoy strong support.

Of course, the progressive students are also useful tools for entrenched campus ideologues.

As an example, on Wednesday, October 28, students are encouraged to participate in purge training. The training involves a campaign against the Charles Koch Foundation, which is known for supporting conservative causes:

“In the spirit of Halloween, we’re getting our Kochbuster on and coming together to exorcise Koch’s influence from campuses across the country. We’re sending a clear message: We will organize against those whose expressed intent is to place private interests over the wellbeing of our communities. 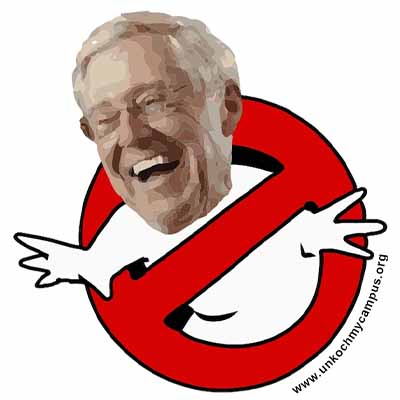 This year, we’re encouraging participants to take action by leaving or logging off class and instead attend a webinar we’re co-hosting with Kochs Off Campus Arizona. This webinar will feature the author of State Capture, Alex Hertel-Fernandez of Columbia University. Alongside the Center for Media and Democracy, Alex will educate us about the privatizers’ troika that has been riding roughshod over our public institutions and services, including public education, as well as our democratic rights.

Highlighted school/state actions include chalking across campus at GMU and a stand-out in Tucson protesting the Koch network’s project to privatize Arizona public institutions and take away our civil rights.

WHY: WE AIN’T AFRAID OF NO KOCHS! To protect the integrity of higher education and throw a wrench in Koch’s infrastructure of political influence, we must stop the Koch network from being able to leverage the brand and legitimacy of colleges and universities for their private interests. This includes organizing to get colleges and universities nationwide to END their affiliations with Koch-funded research centers.

WHERE: Campuses across the country from Connecticut to Florida, Arizona, California, Massachusetts, and more!

INTERVIEWS: Students & staff of UnKoch My Campus will be available for comment.

UnKoch My Campus is a nonprofit project working to increase transparency on campus and fighting attempts by corporate donors like the Koch brothers from influencing education. Our network includes grassroots campaigns made up of students, educators, alumni and community members who have seen firsthand the undue influence Koch money has on campus, in the form of undisclosed, quid-pro-quo arrangements that give them a say on curriculum, hiring decisions and research outcomes.

The Koch Foundation is a boogeyman of sorts to progressives who see its efforts to introduce free market principles into university curricula as a threat. In a 2018 post on the progressive Blog For Arizona, the billionaire Koch brothers (Charles and his deceased brother David) are accused of “infecting the University of Arizona with millions of dollars for right-wing propaganda.”

Progressives allege the Koch network is seeking “to corrupt the discussion of science in the interests of religion.”

While hosting an east coast socialist-leaning professor like Alex Hertel-Fernandez will likely be ignored or celebrated by University officials, CRU activities have come under scrutiny since its inception and now the group is likely to be no more.

“I’m hopeful we can find a replacement for the club, these young conservatives deserve all the support we can give them,” Loftus told the ADI. “However, I still fear the Marxists’ influence on campus as they seem to be plentiful and well-funded.  I would like to see more support from the Arizona conservative community with these future leaders of the GOP.”