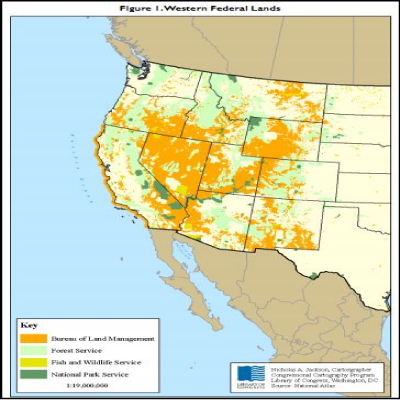 The federal government owns more than 623 million acres of land, mostly in the western states. The recent defense spending bill included designation of new National Parks, Wild and Scenic Rivers, and National Heritage areas. How much land is enough?

The State of Utah wants 31.2 million acres of its land back. “In an unprecedented challenge to federal dominance of Western state lands, Utah Gov. Gary Herbert in 2012 signed the ‘Transfer of Public Lands Act,’ which demands that Washington relinquish its hold on the land, which represents more than half of the state’s 54.3 million acres, by Dec. 31, 2014.” (Washington Times) We are still awaiting the outcome of this probably quixotic endeavor. But it sets a precedent and more western states should take up the quest.

Besides outright ownership, the feds are wreaking havoc on private property rights through the Endangered Species Act and the Clean Water Act.

In Arizona, for example, the right of Phoenix, the Salt River Project, and the Central Arizona Water Conservation District to divert Colorado River and Salt River water to Phoenix and Tucson is being threatened by the US Fish and Wildlife Service because those diversions allegedly endanger everything from Gila topminnows, and Chiricahua leopard frogs, as well as willow flycatchers.

The Town of Tombstone was forbidden to fix part of its water supply after it was destroyed in a forest fire because the source is in a wilderness area. (See Tombstone versus the United States)

The EPA and Corps of Engineers are attempting to expand the definitions in the Clean Water Act to include the most tenuous connection to “navigable waters” that would encompass private irrigation ditches, ponds, and puddles in order to gain more control over private property.

Perhaps the new Congress can address some of these abuses of federal regulations and free the land from Big Brother and allow states and private property owners to put the land to productive use.