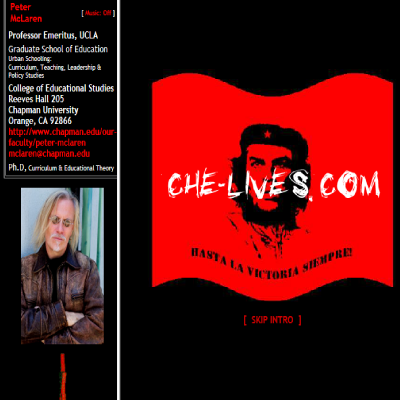 The “Staff Report Concerning the Expenditure of Desegregation Funds in the Ethnic Studies Programs of the Multicultural Student Services Department,” was prepared at the request of the Tucson Unified School District Governing Board. The report offered at the May 3, Governing Board meeting, is in partial fulfillment of the Board’s request for a detailed report on desegregation spending in the four Ethnic Studies programs in fiscal year 2009-2010.

This series will examine various programs, budget items, and data from that “audit.” Experts agree that the “audit” appears to be more of an argument than an audit, however the information contained therein is useful in the examination of the district’s failure to provide a rigorous education for all students.

Part I: Social Justice and Critical Race conference and consultants

Every year for the past 12 years, Tucson Unified School District’s Mexican American/Raza Studies program and the University of Arizona’s College of Education co-sponsor the Institute for Transformative Education. This annual conference brings together professors, teachers, students and other professionals involved in transformative education and critical race pedagogy.

According to TUSD’s website, “This four-day conference provides participants with the opportunity to listen to and dialogue with leading scholars in the areas of: Chicana/o Studies, Cultural Responsiveness, Ethnic Studies, Critical Multicultural Education, Urban Education, Urban Youth Engagement, Critical Pedagogy, and Critical Race Theory in Education.” 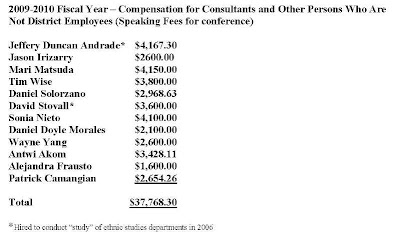 Jeffrey F. Milem, associate dean of academic affairs and a higher education professor once described the conference, “Some of the country’s most outstanding scholars in the areas of transformative education and critical pedagogy will be speaking at this conference, and we are happy to be a collaborator in this important endeavor.”

According to a post on the University of Arizona’s website, “We’re really, really happy with our partnership with the College of Education,” said Augustine Romero, TUSD’s senior academic director for ethnic studies. “When (the college’s) dean, Ronald Marx, came on board he was really looking for different ways to establish a stronger relationship,” he said. “What it means for us is this stronger connection between the College of Education and TUSD.”

Proponents of transformative educational theory believe that an education based on this theory will:

•Help expose the truth about political regimes based on power relationships.

•Help students/individuals become agents of change – someone who can act rather than react and be acted upon. It provides the opportunity a learner to transcend the limitations of one’s self and maximize change on a much larger scale.

•Help establish international networks which are important for individuals to feel connected and to reach out for help and support to advocate change.

At the core of Transformative Learning Theory, is the process of “perspective transformation”, with three dimensions: psychological (changes in understanding of the self), convictional (revision of belief systems), and behavioral (changes in lifestyle).

Peter McLaren is a professor of urban studies at the University of California, Los Angeles Graduate School of Education and Information Studies. McLaren has written dozens of books related to Marxism, curriculum, pedagogy and policy.

From McLaren’s website, “This website is developed as a resource for students of critical pedagogy. The critical pedagogy which I support and practice advocates non-violent dissent, the development of a philosophy of praxis guided by a Marxist humanism, the study of revolutionary social movements and thought, and the struggle for socialist democracy. It is opposed to liberal democracy, which only serves to facilitate the reproduction of capital. It advocates a multiracial and anti-imperialist social movement dedicated to opposing racism, capitalism (both in private property and state property forms), sexism, heterosexism, hierarchies based on social class, as well as other forms of oppression. It draws its inspiration from philosophers of revolutionary praxis such as Paulo Freire, Raya Dunayevskaya, and other philosophers, social theorists and political activists and supports all those who yearn and struggle for freedom. Critical pedagogy is opposed to both state terrorism and individual acts of terrorism. As Freire writes in The Pedagogy of Freedom, “Terrorism is the negation of what I call a universal human ethic.” Critical pedagogy is driven by the engine of class struggle in both national and international arenas.”

Antonia Darder is an associate professor at the University of Illinois at Urbana-Champaign in the area of educational policy studies. Darder researches issues related to racism, class and social issues, identity and language.

From the Paulo and Nita Freire International Project for Critical Pedagogy website, “Antonia Darder is internationally recognized for her contributions as a radical educator in the critical pedagogy tradition. Her work has focused on comparative studies of racism, class, gender, and society. Her teaching examines cultural and global issues in education with an emphasis on identity, language, and popular culture, as well as the philosophical foundations of critical pedagogy, Latino and Latina studies, and social justice theory.”

Francisco Rios is professor and department chair of educational studies at the University of Wyoming. Rios is an expert on multicultural education and diversity in teacher education.

Sandy Grande is an associate professor of education at Connecticut College. Her research is focused on critical theory and revolutionary struggle, identity, and power.
David “Olmeca” Barragan is a community organizer inLos Angeles who identifies as an “artivist.” Barragan uses music and art to promote community action.
Dr. Jason G. Irizarry is an Assistant Professor of Multicultural Education in the Department of Curriculum and Instruction in the Neag School of Education and Faculty Associate in the Institute for Puerto Rican and Latino Studies at the University of Connecticut. His research focuses on culturally responsive pedagogy, youth participatory action, and Latino students in U.S. schools. Current courses taught are Multicultural Education, Critical Pedagogy.
Mari J. Matsuda is an American lawyer, activist, and law professor at the William S. Richardson School of Law. She specializes in the fields of feminist theory, critical race theory. She serves on national advisory boards of social justice organizations, including the ACLU. Writings include “Words That Wound: Critical Race Theory, Assaultive Speech, and the First Amendment.”
Tim Wise served as an advisor to the Fisk University Race Relations Institute. He has appeared on numerous radio and television broadcasts, including The Montel Williams Show, Donahue, Paula Zahn NOW, MSNBC Live, and ABC’s 20/20, to discuss the issue of white privilege and racism in America. Writings include, “Speaking Treason Fluently: Anti-Racist Reflections From an Angry White Male.”
Daniel Solorzano, professor in Social Sciences and Comparative Education, UCLA. His teaching and research interests include: Critical race and gender theory in education, microaggressions in education, and race/ethnic, gender, and class relations. His writings include, “Racial Primes and Black Misandry on Historically White Campuses: Toward Critical Race Accountability in Educational Administration.”
David Omotoso Stovall, Associate Professor Educational Policy Studies. He studies the influence of race in urban education, community development, and housing. His research draws from Critical Race Theory, educational policy analysis, sociology, urban planning, political science, community organizing, and youth culture.
Sonia Nieto, is a professor at the University of Massachusetts,School of Education. She has taught students at all levels from elementary through graduate school. She has received awards for her advocacy and activism, including the Social Justice in Education Award from the American Educational Research Association. Writings include “Dear Paulo: Letters From Those Who Dare Teach.”
Daniel Morales-Doyle teaches chemistry. He has been teaching at Social Justice High School since 2006. His interests include issues of race and class in science education, critical pedagogy, and connections between community organizing and urban schools.
Wayne Yang is a professor at the University of California,San Diego. Research and teaching interests include popular culture and social movements; urban education and critical pedagogy; coloniality in urban ghettos; anti/de/post+colonialism. Writings include, “For and against: The school-education dialectic in social justice (W. Ayers, T. Quinn, & D. Stovall), “Organizing MySpace: Youth walkouts, pleasure, politics and new media. Educational Foundations.” His current projects include “Youth Resistance Revisited,’ “The Urban Pedagogy Reader.”
Antwi Akom’s research focuses on the links between race, environmental health, and educational equity. His research and practice works to build partnerships between local residents, schools and universities, community based organizations, and labor unions to generate policy and change the pedagogies and practices of community leaders. He is working on his first solo authored book, “Ameritocracy: The Racing of our Nations School Children.”
Patrick Camangian, is an assistant professor in the Teacher Education Department at the University of San Francisco. He has collaborated with groups such asCalifornia’s Association of Raza Educators, the Education for Liberation national network, andSan Francisco’s Teachers 4 Social Justice. His writings include, “Handbook of Social Justice in Education,” “Untempered Tongues: Teaching Performance Poetry for Social Justice.” Research areas include critical pedagogy and transformative teaching.
For more information on the UofA TUSD Transformative Education Institute visit:
http://www.tusd1.org/contents/depart/mexicanam/documents/Institute2010.pdf
http://www.tusd1.org/contents/depart/mexicanam/documents/Institute2009.pdf