The Tucson Unified school District is not required by state law to issue certificates of completion to its eighth graders in order for them to be admitted into high school, but they do. Those signed certificates say that a student has met the requirements for promotion and has acquired skills that prepare them for high school.

Those certificates have been signed by the Pima County Superintendent of Public Instruction Linda Arzoumanian, and the individual middle school principals.

Thousands of TUSD students have received those certificates over the years who have failed to meet the requirements for promotion and have few basic skills that would qualify them to move into any high school, and TUSD administrators and board members know it.

Some people call it fraud. People, including parents and teachers, are beginning to ask how the district can issue certificates, knowing full well that the assertions made in those certificates are untrue.

Some argue that not only is it fraudulent, but the district’s unwritten social promotion policy is the height of discrimination by low expectation, and out of compliance with State law that requires district governing boards to establish minimum academic requirements for promotion from grade level to grade level. ARS 15-701.

In 1998, President Clinton’s Secretary of Education Richard Riley said, “At present, standards don’t count for much. Students are often passed from grade to grade regardless of whether they have mastered required material and are academically prepared to do the work at the next level. This practice is called social promotion. For many students, the ultimate consequence is that they fall further and further behind, and leave school ill equipped for college and lacking the skills needed for employment. This situation is unacceptable for students, teachers, employers, and taxpayers.”

On the next TUSD Governing Board meeting agenda is a report on the retention rate some of the district’s junior highs. In that report, IF the district is honest to the Board, they will report that few children are retained. It will show that students who have not mastered basic math and reading skills are passed on to the district’s high schools.

According to a story in the Arizona Daily Star in 2008, “Thousands of Tucson-area middle and high school students who fail key subjects continue to progress through Pima County’s largest school districts every year toward graduation.”

A “10-month investigation by the Arizona Daily Star” found that in one year alone, “nine in 10 students were moved to the next grade level, but data show that nearly a third of them failed basic courses in English, math, science or social studies. At least 94,000 students failed essential classes during the past six years.”

The district’s dismal AIMS scores and grades of “D” from the Arizona Department of Education are evidence that nothing has changed.

Back in 2008, when the Arizona Daily Star still let reporters be reporters, George Sanchez called the called TUSD’s social promotion policy “an open secret in education for years, and “the practice is not only causing major academic problems now, but is setting up what could be a major blow to the region’s economy.” 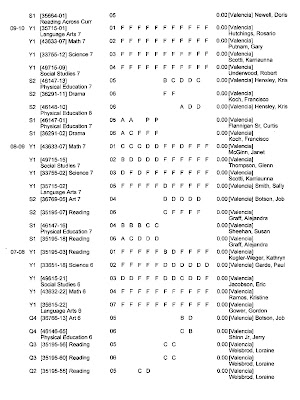 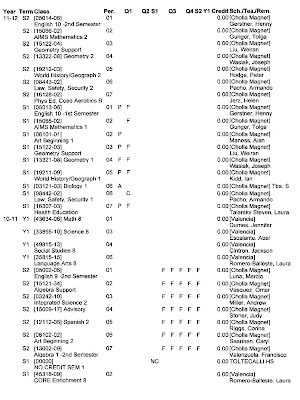 Governing Board member Michael Hicks, at the request of very dedicated district employees, is pushing a review of the district’s practices and called for the report to be produced. “We just can’t keep cheating these kids. They are our kids and they are counting on us.”

TUSD’s Pedicone has been heard to call the discrimination of low expectations “soft discrimination.” However, education experts would argue that there is nothing soft about discrimination, and for those kids who land out on the street without basic skills after 12 years in TUSD, the landing is not soft at all.