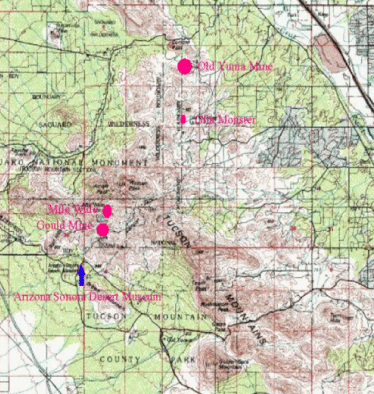 Once upon a time, the Tucson Mountains west of town, were the site of much mining activity and speculation. The area now is part of a Pima County park and the Saguaro National Monument. But, back in the late 19th Century and early 20th Century, prospectors established approximately 120 mines and prospects that were explored for copper, gold, and silver. Some properties also “mined” stockholders. According to the National Park Service, the first claim was registered in 1865.

The Tucson Mountains are composed of volcanic rocks that collapsed into a caldera about 70 million years ago. The caldera was about 12 miles wide and 15 miles long. The volcano collapsed as the result of rapid eruption of volcanic ash which piled up in flows that reached an accumulated thickness of about three miles. Kinney Road runs just east of the western ring fracture zone of the caldera. East of Kinney Road is geologically down, about 1,000 feet into the caldera, although now the rocks are topographically higher.

Toward the end of the volcanic episode, magma rose and penetrated the flows, metamorphosing some, and bringing hydrothermal solutions carrying copper, gold, silver, and other metals. A more detailed overview of the process is presented in Sonorensis, a publication of the Arizona-Sonora Desert Museum here, A history of the district prepared by the National Park Service can be seen here . The Park Service notes that mining and prospecting in the Tucson area was greatly encouraged by arrival of the Southern Pacific Railroad in March, 1880. That allowed shipment of bulky ores to smelters.

Most of those 120 odd prospects were just holes in the ground, but four mines had some consequence: Old Yuma, Gila Monster, Mile Wide, and Gould mines. Of the four, the Old Yuma mine was the most famous, not for its ore, but for its museum quality mineral specimens. If you are a hiker, you can visit these old mine sites.

The Old Yuma Mine

The Old Yuma Mine, located about half a mile south of Picture Rocks Road, was primarily a small gold mine, but it also produced other metals. The mineralization occurred in steeply dipping veins cutting the volcanic rocks. Between 1916 and 1947, this underground mine produced 5,700 tons of ore grading 4% lead, 1% copper, 0.6% zinc, 0.3% molybdenum, 1 ounce silver per ton, and 0.1 ounces gold per ton. This mine also produced spectacular specimens of wulfenite (PbMoO4), a lead-molybdenum oxide, and vanadinite (Pb5(VO4)3Cl), a lead-vanadium mineral. You can see many photos of these minerals at the digital library of the Arizona-Sonora Desert Museum (click on “minerals”).

The Gila Monster mine was located about one and a half miles south of the Old Yuma. It was developed on a vein of lead, zinc, copper mineralization adjacent to a large block of limestone that was engulfed in the caldera volcanics. Production was minor, but interesting specimens of red-fluorescing calcite and willemite, a zinc silicate (Zn2SiO4) were taken from the mine.

The Mile Wide mine, located about a mile and a half north of the Desert Museum, primarily mined stockholders. According to a history by the National Park Service, the mine was optioned in 1915 to Charles Reiniger:

“Reiniger established the Mile Wide Copper Company. It was so named because the width of the claims was a mile wide. He concentrated on the Copper King which became known as the Mile Wide Mine. In the process of development Reiniger abandoned the old shaft in favor of a new site up the hill. While mining at that location he reported a copper strike which purportedly would be the equal if not superior to the largest Arizona copper mines. As a result, stock sales increased and Reiniger further developed the property. He built four houses, a work shop, mess house, rock crusher, and mill. In addition he improved the road to make it possible for his six trucks to haul more ore to Tucson for rail shipment to the smelter at Sasco which was just north of Silver Bell.”

Reiniger used the mining activity and promotional hype to practice fraud on the stockholders. In late 1919 he disappeared taking half the money derived from stock sales. In addition he sold up to $100,000 of his own stock before his departure.

The Gould mine was located half a mile south of the Mile Wide mine. It was established in 1906 and produced 45,000 pounds of copper before it ceased operations in 1911. There is a hiking trail  that passes through the property.

Speaking from my perspective as a geologist hunting for large porphyry copper deposits, it seems that the mines of the Tucson mountains were teasers, lots of smoke, little fire. But they provided great adventure for a time.

When you drive over Gates Pass, take a look at the road cuts on the west side. You will see big chunks of different colored rocks. These are fragments of the volcanic flows that fell back into the caldera. In some places there are also limestone blocks as big as houses.

Local First Arizona Festival Expands To Include All State-Based Businesses

Despite Slowing, Foreign Student Numbers In US, Arizona Inched Up