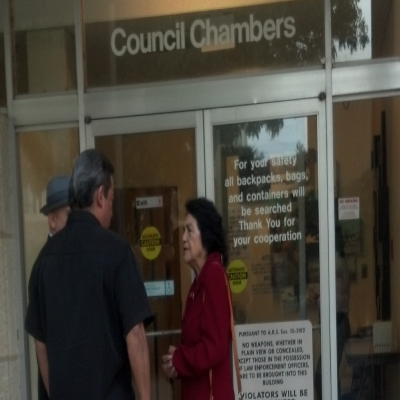 On Tuesday, labor union activist Dolores Huerta attended a rally in honor of Cesar Chavez at Davis Bilingual Magnet School. Huerta has been in town to throw her support behind the City of Tucson’s proposal to increase the number of paid holidays for Tucson employees to accommodate a Cesar Chavez Day.

A TUSD father was on hand to see Huerta address the Davis Bilingual Magnet School children. According to the father, the atmosphere was exciting; the students ranging in age from about 5 to 11 years old were swept away with the chants and cheering by the adults on stage.

He then described having a chill run down his spine as the children and the atmosphere in the room transformed.

“These kids were being told that they needed to hold each other’s hands, which was cool, we all should be supportive of each other in this world,” said the father, who wishes to remain anonymous for his children’s well-being. “But then all of the sudden the principal was yelling viva Cesar Chavez and viva Dolores Huerta, and si se puede, and then they started the Cesar Chavez clap and the room changed. This was not to honor a civil rights hero, it was a political rally.”

“It had everything you need to turn kids into little followers. The chanting, the kids’ pictures of Cesar and Delores all around the room, kids’ drawings of the migrant worker symbol,” continued the father. “It had all the stuff you need. The cult of personality and kids being told that they were all one and not individuals. It was really bad. They were indoctrinating these kids.”

Although TUSD Governing Board member Cam Juarez has been advised before that it is against Arizona statute to use school resources for political events, he beamed as Campuzano urged the children to engage and push for the paid day off.

After leading her students in a rousing round of Viva Delores Huerta, Viva Cesar Chavez, and Si Se Puede, Magnet School principal, Carmen Campuzano, told the children, “So today at 5:30 the Tucson City Council will be voting whether to make a paid holiday for the employees of the City of Tucson to honor Cesar Chavez. All of you need to be there to demonstrate our support for this important recognition, for one of our wonderful heroes and for the legacy of Cesar Chavez. Delores Huerta will be there to speak to the City Council and we will then hope that Tucson will honor this great man, okay?”

The TUSD administration and Board have been warned before about using government resources for political activities. For years, Board member Adelita Grijalva and her father, progressive Congressman Raul Grijalva have used the District as a organizing and fundraising arm of their campaigns.

Juarez escorted Huerta to City Hall to fight for the paid day off proposed by Tucson Councilwoman Regina Romero, who is married to Raul Grijalva’s top aide.

Romero had suggested that the City, which is close to bankruptcy, eliminate the employees’ current floating holiday and replacing it with the César Chávez Day. The unions would not accept that offer and demanded a separate day.

Shortly before last night’s vote, Mayor Jonathan Rothschild said, “I need everyone in this room to understand, this ordinance is not without a cost.” The measure passed unanimously.

City Manager Richard Miranda said the cost of the holiday “will be absorbed in our budget.” He claimed, “… we’re not going to need to take anybody’s job away.”

And the City likely will not. More than likely, they will continue to raise taxes to cover the annual estimated cost of $503,000.

In January, Juarez told the Arizona Daily Star that the holiday would be another step toward statewide recognition of the former labor leader. Juarez, chair of the Arizona César E. Chávez Holiday Coalition, told the Star that his group has spent the past 12 or 13 years educating the public on the life and accomplishments of Chávez, to lay the foundation for Chávez holidays to gain traction.

“Our focus has been on education. Because before people are going to support a holiday, you really, truly need to understand what you’re supporting,” Juarez told the Star.

“Based on his appearance at Davis Bilingual, Juarez has definitely decided that he is going to start ‘educating’ little union soldiers. Maybe someday the kids will understand exactly what it is they are supporting,” concluded the father, “but I understand exactly what they want them to support now. I am glad I came today, otherwise I would not have believed this stuff really goes on.”

One long time educator said the inappropriate use of students showed once again TUSD’s dysfunctional culture that puts the political needs of adults far ahead of the learning needs of students. “Had the school assembly just been a celebration of Cesar Chavez’s life that would have been fine,” said the educator. “But urging the kids to do stuff for a political cause was way over the top.”

The educator noted, “The latest Arizona Auditor General report puts TUSD’s classroom spending at 49.2% of revenues, down from 50.6% last year. The percent of the budget going to administration went up from 9.8% of revenue to 10.2%. Enrollment went down and so did funding…from $8,751 per pupil to $8,421. Perhaps families do not want their children indoctrinated, and that is why the exodus of students from TUSD has accelerated recently.”

In 2004, Arizona Attorney General published guidelines regarding the state law which prohibits school district political activities and the inappropriate use of resources and personnel. The guidelines are: “intended to address possible ambiguous situations….” and school board members and District staff “must not represent that they are acting on behalf of the school district or charter school while engaged in activities to influence the outcomes of elections.”

In 2006, Huerta addressed the District’s students and touched off a firestorm when she told Tucson High Magnet School students to start a postcard campaign with the theme: “Republicans hate Latinos.”