According to a story in the Arizona Daily Star by Tony Davis: “New UA center aims to prepare Tucson, world for climate change” the University of Arizona is establishing a new Center for Climate Adaptation Science and Solutions. The new department is to be headed by Kathy Jacobs who returns to Tucson after serving as a “top aide” to Obama’s science czar John Holdren. (Jacobs’ Profile here).

“I think many people think climate change means it will be warmer every year and drier every year,” Jacobs said. “There actually seems to be a lot of variability in these trends.” Does that mean it might get colder and wetter from time to time? Has that ever happened before?

The “center’s basic purpose is to help people in Tucson, nationally and globally adapt to a changing climate by offering management options and practices aimed at protecting lives, property and the national environment from its impacts.” One goal of the new center: “Help people understand how variable year-to-year fluctuations in temperature and precipitation are.” Isn’t that called weather?

The first sentence in Star story sets up the raison d’être for the new department which I think is designed principally to suck up politically correct federal funds: “We’re going to have to adapt to more huge wildfires, prolonged heat waves, electricity brownouts, floods and severe droughts and other more extreme events in the future, thanks to climate change…” That’s the set up for the scary scenarios and why we might need such a new department. It falls right in with H. L. Mencken’s observation: “The whole aim of practical politics is to keep the populace alarmed (and hence clamorous to be led to safety) by menacing it with an endless series of hobgoblins, all of them imaginary.”

Wildfires: Data from the National Interagency Fire Center shows that the number of wildfires has been steadily decreasing since 1960. The number of acres burned, however, has been increasing since about 1995 due in part to changes in forest management under the Endangered Species Act. (See wryheat post for more detail)

Heatwaves: Looks like the 1930s surpass any we’ve experienced recently. 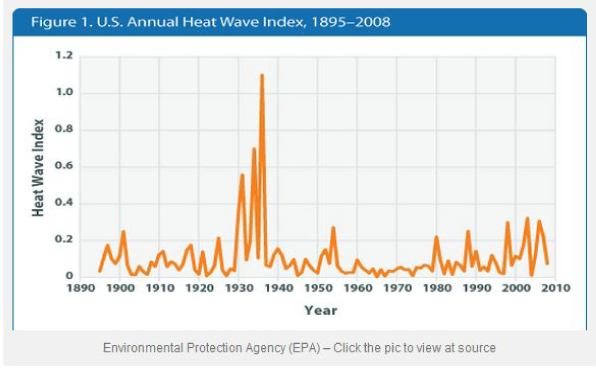 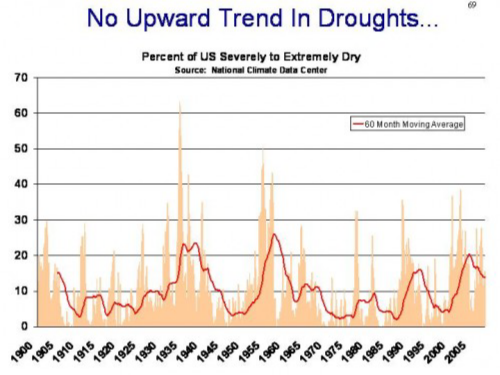 Unusually wet weather: No trend since 1900 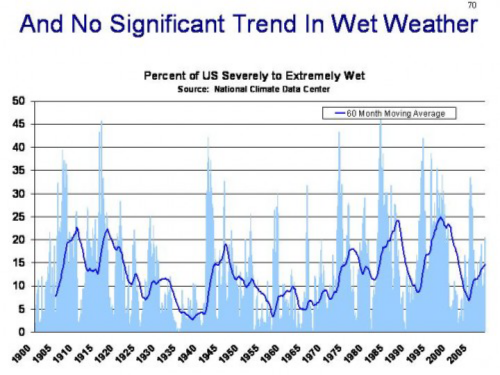 Hurricanes: Variable, but decreasing trend since 1993 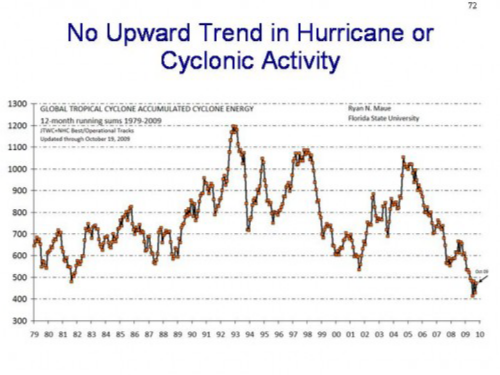 Electricity brownouts: Here’s a problem that may be real. Our electricity grid will become more unstable with the increased use of unpredictable, unreliable wind and solar energy, and by the EPAs war on coal which is closing generating stations.

According to the Star article, one of the key areas of interest for the new center is slashing carbon dioxide emissions with renewable energy and “non-gas-guzzling vehicles.” That, alone, indicates that this new department will be political rather than scientific. Slashing carbon dioxide emissions is not economically feasible, nor will it make any difference in global temperature or extreme weather. It looks like the people in the new center think they can change the course of several billion years of climate change with a few small tweaks.