The Sonoran Desert toad (Bufo alvarius), formerly known as the Colorado River toad, is one of the largest native toads of North America, some reaching seven inches long. The toad is greenish-gray on top and creamy or white on the bottom. They have large white “warts” at the jaw angle, large parotid glands (the lumps behind the eyes) and a few large lumps on the hind legs. Toadlets are tan to green with orange or red spots. The photo below is from the Arizona-Sonora Desert Museum digital library. Click here for more toad photos. 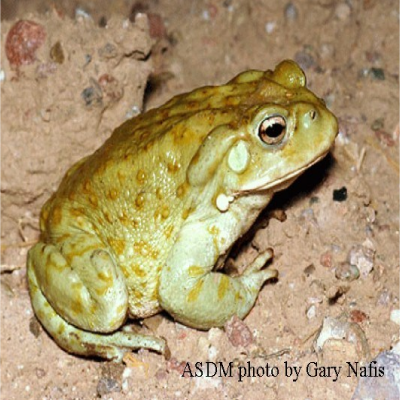 This toad ranges from Central Arizona to southwestern New Mexico and Sinaloa, Mexico. It used to occur in southeastern California but has not been reported there for about 40 years. The Sonoran Desert toad inhabits creosote bush desert scrub, grasslands up into oak-pine woodlands, and thorn-scrub and tropical deciduous forest in Mexico. During the summer, you might see one in your yard. These toads can climb fences and walls if there is enough purchase.

According to the Arizona-Sonora Desert Museum: “Sonoran Desert toads feed upon a variety of insects throughout their lives. Adults eat primarily beetles, although large individuals will occasionally eat small vertebrates including other toads. Sonoran Desert toads are active from late May to September, though principally during the summer rainy season. They are nocturnal during the hot summer months. The male’s call is weak, sounding somewhat like a ferryboat whistle. Eggs are laid in temporary rain pools and permanent ponds. Larvae metamorphose after 6 to 10 weeks. This species lives at least 10 years, and perhaps as many as 20 years.”

A defensive milky neurotoxin venom can be released from the parotid gland behind the eyes and similar organs on the legs. The venom is potent enough to kill a large dog, should the dog grab a toad. Symptoms of envenomation include foaming at the mouth, drunken gait, confusion, vomiting, diarrhea, or complete collapse. There is no antitoxin.

The venom can have a psychedelic effect because it contains chemicals in the dimethylethanamine family and is closely related to DMT, a naturally occurring hallucinogenic drug akin to synthetically made LSD. Toad venom has long been used by native peoples of the Colorado River region in some religious ceremonies. Some people lick the toads to get high and there are many websites explaining how to extract the venom, dry it and smoke it. This is very dangerous because an overdose can cause cardiac arrest in humans.

By the way, what is the difference between toads and frogs? All toads are frogs, but not all frogs are toads. According to allaboutfrogs.org, in general, frogs have two bulging eyes, strong, long, webbed hind feet that are adapted for leaping and swimming, smooth or slimy skin, tend to like moister environments, and lay eggs in clusters. Toads have stubby bodies with short hind legs, warty and dry skin, parotid glands behind the eyes, and tend to lay eggs in long chains. Frogs have teeth; toads don’t.