Among the many creepy-crawly critters in the Sonoran Desert are centipedes and millipedes, both of which have some interesting properties. 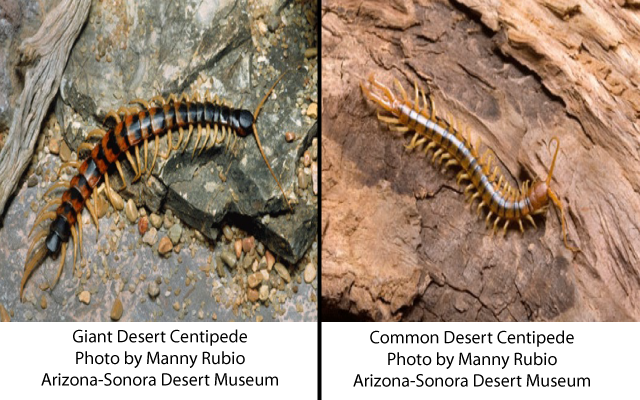 The Giant Desert Centipede (Scolopendra heros) can grow up to 8 inches long. The body is usually orange to yellowish-tan, often with alternating black, and the head and tail segments are black. The common desert centipede (Scolopendra polymorpha) is 4- to 5 inches long, and brown to tan. Centipedes have a flattened, segmented body with one pair of legs per segment. If the centipede is not moving, it can be hard to distinguish the back end from the front end because both have antenna-like appendages. But, just under the head are powerful pincers (gnathopods) which can delivery a very painful pinch and venom. The venom is not harmful to humans, but don’t try to pick up a centipede.

Centipedes are fast-moving predators that feed upon any small animal they can catch, primarily insects, but they are known to take other arthropods, lizards, and also small rodents. Centipedes usually hunt at night, but may be out in the daytime during the rainy season. Female centipedes will guard their eggs until they hatch. The centipede usually prefers slightly damp micro-habitats beneath rocks or in debris such as dead saguaros. Despite the name “centipede” Scolopendra usually have 42 legs. The number of legs depends on the species. 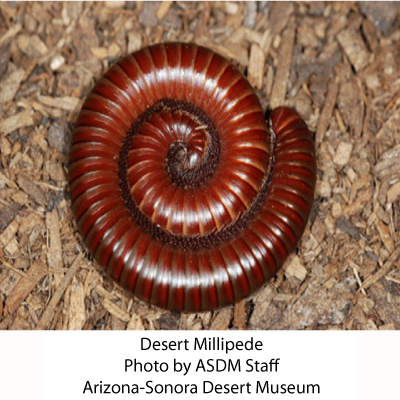 The Desert Millipede (Orthoporus ornatus) has a cylindrical body, up to 6 inches long. Body color varies from reddish-brown to black. Millipedes have two pairs of legs per segment. They begin life with only a few segments and add segments and legs as they grow. Millipedes are quite adaptable and occur throughout the world. They prefer humid environments and are commonly seen following summer rains (their nickname is “rainworm”).

Millipedes are nocturnal and feed on living and decaying plant material, and that includes cholla, creosote bush, ocotillo, and mesquite. They also ingest soil and help play a role in soil conditioning. For defense, it usually rolls into a coil. Upon further provocation, millipedes use chemical warfare. They can secrete, and shoot up to 10 inches, a liquid which contains benzoquinones, aldehydes, hydrocyanic acid, phenols, terpenoids, nitroethylbenzenes, and other substances. These can be very irritating. However, millipedes are usually gentle; I’ve handled them without any problem. Some people keep them as pets. They can live for as much as ten year. Millipedes don’t bite.

Both centipedes and millipedes spend most of their time underground.