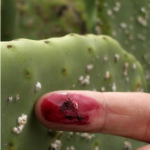 Have you ever noticed that some prickly pear pads around town have white fuzzy stuff on them? These fuzzies are especially prominent in the summer. Under the fuzzy stuff, which is a waxy web, is a little red bug called a Cochineal. Scientific name: (Dactylopius cocus). A link to many images is given at the end of this post.

The story of the Cochineal is fascinating, and you may often use something it produces.

When Hernan Cortes came to Mexico in 1523, he noticed that the natives were wearing brilliant red clothing. He also saw that the color didn’t fade upon washing. He found the perfect red dye, something Europeans had been seeking for centuries. Where did this remarkable dye come from?

Female cochineals are attached to the plant and sedentary. Males resemble small pink and white gnats.

Males undergo complete metamorphoses and develop into winged adults. Females, however, remain in a prolonged larval stage, never changing into winged adults, but becoming sexually mature nonetheless.
The young females settle near their mother in groups and secrete the fluffy wax which protects them from desiccation. Each female sticks its tube-like proboscis into the cactus pad and draws nutrients from the cactus throughout its three-year life-span. Within a few weeks of hatching, the female becomes bloated and sexually mature – a silvery, purplish balloon, similar to a fully engorged tick. When home sites become too crowded, the young females use web material to ride the wind to another pad.

The male cochineal remains tiny and mobile. After a few weeks, he spins a cocoon-like structure and transforms himself into a tiny, soft-bodied, delicate-winged flyer. The male lacks mouth parts and is programed for one thing, sex, and that he pursues by moving rapidly among the cactus pads and mating with as many females as possible before he dies within about a week.

To produce dye, the bugs are harvested, dried, and boiled. The material to be dyed is placed in vats of the mixture and the color is fixed with oxalic acid obtained from juices of several plants including the cacti themselves.

The Spaniards knew a good thing when they saw it. Cochineal dye was so good, that the bugs and cacti were exported to Spain and to Spanish colonies in South America, and the dye soon took over the market. That, incidentally is why you can find prickly pear cactus in Europe.

For almost 300 years, Spain had a monopoly in Cochineal dye and they strictly controlled the source. One of their best customers was the British Army. The Redcoats red came from the cochineal.

The French didn’t like this and constantly tried to get some of the little red bugs. Finally, in 1787, a French naturalist manage to smuggle Cochineal-laded cacti out of Mexico to Haiti where they too began producing the dye. In the 1870s, the English managed to get some cactus and cochineal and tried to grow them in India.

Red dye from the Cochineal is not used much for clothing any more since it has been replaced by synthetic dyes. However, Cochineal dye is widely used in cosmetics and in food coloring. It is non-toxic and non-carcinogenic. Read the labels of any red food product (For instance, try Yoplait strawberry yogurt). If you see the word “carmine” (or sometimes cochineal), then the red color comes from the mashed remains of the little red bug that lives under the white fuzz dotting prickly pear pads.

Link to images.
See also:
Vinegaroons and Sun Spiders
It’s time for scorpions
Pepsis wasps have the most painful sting