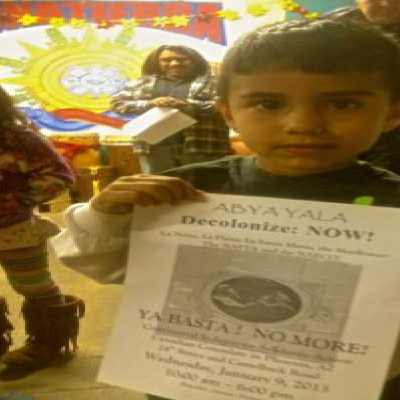 On Monday, the Tucson Unified School District and its Ethnic Studies classes will once again be the subject of a case before the Ninth Circuit Court of Appeals. The Court will consider whether Arizona’s law, commonly known as HB2281, is constitutional.

In 2012, Federal Judge Wallace Tashima, a President Jimmy Carter appointee, found 3 of the 4 provisions of the law to be constitutional. In his ruling in Maya Arce, et. al. v. John Huppenthal, Judge Tashima found that the teachers that the teachers lacked standing and removed them as plaintiffs in the case.

The students remain as plaintiffs. Those students include the daughter of former Mexican American Studies director Sean Arce, and former MAS teacher and current director of Culturally Relevant Pedagogy and Instruction, Lorenzo Lopez.

Lopez, known as one of the most radical MAS teachers was named director of Culturally Relevant Pedagogy and Instruction against the wishes of the African American plaintiffs in the District desegregation case and District Governing Board members Michael Hicks and Mark Stegeman.

Lopez will be in San Francisco today. Arce has been raising funds for he and his daughter to attend the hearing as well. Because Lopez’s daughter is no longer a student in the District, having graduated last year, Arce’s daughter is key to the case.

The fundraising has been filtered through the Xican@ Institute for Teaching and Organizing at Prescott College. The Institute was created by former MAS teacher Curtis Acosta.

Acosta, Arce and to a lesser extent Lopez have been the driving force behind the intimidation of all opponents of the Critical Race based pedagogy. A social science teacher, Ron Silverman, reported to the Arizona Attorney General’s office that while he was teaching at TUSD, he made the mistake of criticizing the veracity of information disseminated in the MAS history class, and as result of his criticism, Arce and Acosta, called him racist and openly encouraged their students to call him a racist as well.

After the classes were removed by the Governing Board when they were found to violate HB2281, Arce was offered a job elsewhere in the District but turned it down to gain martyr status. Not long after that, he was charged with domestic violence against his daughter’s mother.

Tony Diaz, who made a name for himself through the Librotraficante movement, based on the myth that books were banned in the District, told La Cruces Sun-News, that a lot is riding on the Ninth Circuit’s decision.

“When the Ninth District Court of Appeals strikes this down, and America passes this test—when it is clear that there is a balance of power, that there is freedom of speech, that David can beat Goliath — it will be a huge psychological, spiritual and intellectual freedom,” reported the Sun-News. “In the age of ‘I can’t breathe,’ of Ayotzinapa — and the 43 students that were murdered in Mexico — in the age of the Gaza Strip, it’s obvious that we need ethnic studies, across the board,” he said. “Not just to avert these crises, but to cultivate a generation that can deal with them when they happen, and can prevent them.”

Judge Tashima based his ruling in part on the opinion in Johnson v. Poway Unified School District. “There, the Ninth Circuit firmly adopted a single test to determine the First Amendment protection accorded to teacher speech, embracing the test for public employee speech laid out in Pickering v. Board of Education, as modified by Garcetti v. Ceballos,” wrote Tashima.

“It is undeniable that speech made while teaching, which is at issue in this case, is part of a teacher’s “official duties.” Thus, the free speech rights for which Plaintiff teachers here argue are squarely within their role as public employees. Plaintiff teachers have no protected right to speak as teachers, either within or outside of the curriculum in the classroom. The Supreme Court cases which govern in this circumstance, Pickering, as modified by Garcetti, protect only views expressed as a private citizen, not as a public school teacher.”

Judge Tashima agreed with former Arizona Superintendent of Public Instruction John Huppenthal, that “Plaintiff teachers fail to state a claim for relief on the basis of their free speech rights, even if they merely wish to express varying viewpoints about an approved topic in the curriculum.”

“Plaintiff teachers have not demonstrated the concrete injury they suffer as a result of being unable to influence curricula at a local level, especially considering the established principle that “school teachers have no First Amendment right to influence curriculum as they so choose.” Judge Tashima wrote, the “Constitution does not compel teachers, parents, and elected school officials to surrender control of the American public school system to public school students. The teachers and students could just as easily form an extracurricular club or social group outside of school to discuss such issues.”

The MAS classes were offered instead of regular American history and English literature classes. In other words, students did not learn the Aztec-religion based ethnic history in addition to American history, but instead of it. They leaned about the mythical nation of Aztlan instead of the American Revolution, the Declaration of Independence, or the US Constitution. They read the works of radical Chicano writers instead of Dickens or Twain. The only thing Shakespearean they were exposed to was the notion that The Tempest is a play about white oppression of minorities.

On Friday, former Attorney General Tom Horne told the listening audience of the James T. Harris show about his experiences with the students and complaints from teachers which prompted him to write HB2281. It was the words of labor union activist Delores Huerta that first prompted his interest.

In his interview with Harris, Horne said he “was shocked” by what he found in his investigation of the classes. “If you were a Hispanic student you went to the Raza classes, which they were referred to back then, and you were shown the qualities of white people and they were very negative. They were pushing racial stereotypes, pushing racial chauvinism and trying to promote resentment against other races.”

Horne told Harris that during the hearings on the bill, TUSD sent students up to testify in favor of the classes. Horne said one of the legislators asked one of the students, ‘Can’t you learn these things in other courses?’ The student replied, ‘No, before I took this class I didn’t know that I was oppressed. Now that I’ve taken this course I realized I’m oppressed.’

In 2006, Tucson High Magnet School student Mon-yee Fung,17, “voluntarily attended” the assembly where Huerta spoke, “but could not leave after Huerta began saying “Republicans hate Latinos,” according to the Tucson Citizen.

In December, before leaving office, out-going Superintendent Huppenthal found that the District’s current Culturally Relevant classes, under the supervision of Lopez, are once again in violation of HB2281, after their creator Dr. Augustine Romero admitted that the classes were back at the National Association of Multicultural Educators’ conference in October.

What better way to sell your book? Call it banned! Librotraficante