Desert Cottontails (Sylvilagus audubonii) are 12-inch-long rabbits that are preyed upon by many other animals including coyotes, bob-cats, hawks, owls, and snakes. The Cottontail’s only defenses are good eyesight, good hearing, speed.

The Desert Cottontail is our smallest lagomorph. (A logomorph is a gnawing animal, distinguished from rodents by having two pairs of upper incisors specialized for gnawing.) 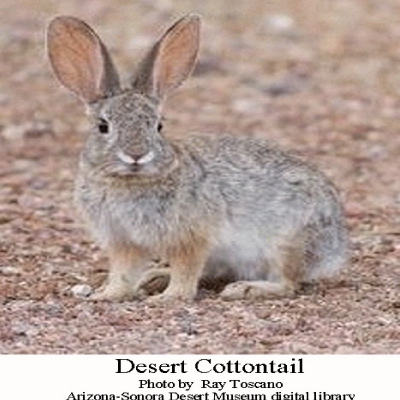 The Desert Cottontail weighs about two pounds and has ears much larger than cottontail rabbits in other parts of the country. Blood vessels in the large ears help cool the rabbit. The Desert Cottontail is tan to grey with rufous nape and white tail. It is found throughout the Sonoran Desert, mainly in thick, brushy habitat that provides hiding places. It is much smaller than the two species of jackrabbits found in the Sonoran Desert. (The black-tailed jackrabbit favors foothills, while the antelope jackrabbit is usually found in valleys. Both jackrabbits are about 20 inches long.)

Cottontails feed upon grasses, forbs, mesquite leaves and beans, and cacti (for moisture). Moisture in the plants usually fulfill their need for water, but they will drink given the opportunity.

“Cottontails are primarily crepuscular [dawn and dusk] and nocturnal, but during milder temperatures may be active during the day as well. They usually rest during the heat of the day in “forms” — shallow depressions under grasses or brush, or in brush piles. They also use burrows of ground squirrels, skunks, packrats or badgers, when available. Cottontails breed throughout the spring and summer months. They usually have at least two litters per year. About a month after parents mate, two to four baby rabbits are born. The mother rabbit excavates a nest a few inches deep and lines it with grasses and fur, covering the babies with another layer. Mothers mostly stay away from the nest so as not to alert predators, returning only a few times each night to nurse the babies. In two weeks the little rabbits leave the nest. At this age they are very timid and cautious, never venturing away from the safety of a bush or shrub. Rabbits live about two years, if they’re lucky.”

The cottontail is the rabbit usually seen in suburban neighborhoods in Tucson – and Harris’ Hawks seem to know about that.

For other mammals of the desert, see: