The title is not a trick question. The Black Bear (Ursus americanus) comes in six colors. Black is the most common color, but these bears can also be chocolate, cinnamon, blonde, white, and bluish gray. 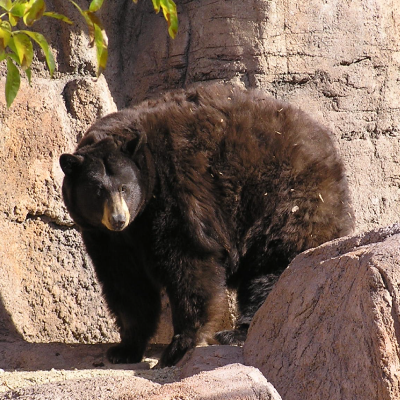 The black bear is the smallest of north American bears. Typically, an adult will weigh between 200 and 300 pounds. The cubs at birth weigh only about 8 ounces. The photo with this article is of the black bear at the  Arizona-Sonora Desert Museum; she is larger than the average bear.

Black bears are classified as carnivores, but they really are omnivores, only a small portion of their diet is meat. They eat a variety of fruit, vegetable matter, carrion, rodents, insects and almost anything else they can get.

The black bear is mainly a mountain dweller, although in very dry times, they may venture onto the desert floor (or into the city) in search of food.

Black bears spend winter in a den as an adaptation to the shortage of food during this season. During this time they give birth to their cubs but do not eat, drink, or eliminate wastes. The female (sow) will suckle cubs for up to 30 weeks. The cubs become independent at age 16- to 18- months.

Black bears are smart and dextrous. They can open screw-top jars and manipulate door handles. They also have good eyesight and can learn to distinguish colors and shapes. They have a large variety of vocalizations.

American black bears tend to be territorial and solitary except during mating season. This territoriality has implications for trying to relocate problem bears. If one is relocated into the territory of another, that bear may not survive.
According to Arizona Game & Fish:

Black bears are the most common and widely distributed of the three North American bears. Historically, black bears occurred in all forested habitats in North America, including Mexico. The species has been extirpated from many eastern and mid-western states, but still occurs in 38 states, 11 Canadian provinces, and seven Mexican states.

In Arizona, the black bear is found in most woodland habitats, including pinyon-juniper, oak woodland, coniferous forest, and chaparral. An interesting footnote to black bear distribution in Arizona is the absence of any sizeable population of black bears north of the Colorado River.

Black bears are not closely related to Brown Bears (Ursus arctos) which include the grizzly bear and the Kodiak brown bear. The later can get up to 1,700 pounds. (The polar bear, Ursus maritimus, which can weigh up to 1,500 pounds, is a third species.)

Bears can be dangerous. However, in my experience as an exploration geologist, I’ve found that wild bears tend to ignore you. In Montana, one November, I inadvertently got within a few feet of a black bear. We were both surprised, but the bear just gave me a cursory look and went on its way. In Alaska, I encountered several Kodiak brown bears that were busy catching salmon. When they noticed me, they just grunted and went back to fishing. And those are the bear facts.