Ringtails ( Bassariscus astutus), also known as ring-tailed cats, are related to racoons and coatis. Ringtails are common in the Sonoran Desert, but are rarely seen because they are almost exclusively night prowlers.

A Ringtail adult is about 16- to 24 inches long and sports a bushy tail with white and black bands. The tail is usually longer than the body. Each dark eye is surrounded by a white ring. 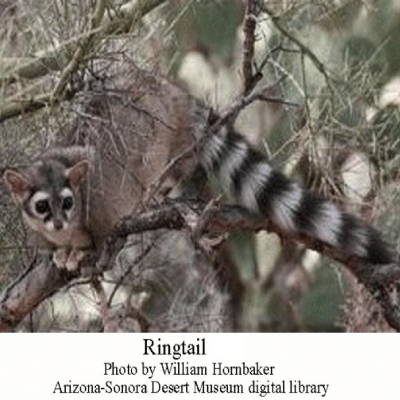 This animal is found throughout the Southwest and into central Mexico. It is usually a canyon dweller. The Arizona-Sonora Desert Museum (ASDM) reports a “large” population near Tucson. During the day, the Ringtail occupies rock crevices, hollow trees, or caves. They are good climbers.

At ASDM, many of the exhibits in the cave may have footprints on the inside of the glass – Ringtails have managed to “get behind the scenes.”

Ringtails are omnivores that feed on rodents, fruit, birds, snakes, lizards, and insects. They have large eyes and a keen sense of smell.

“Ringtails inspect likely niches and hiding spots in their rocky habitats, hunting for rodents, birds, centipedes, and anything else edible. They are excellent mousers, pouncing and killing with a bite to the back of the rodent’s neck.”

“Ringtails are strictly nocturnal animals, using their large eyes and keen sense of smell to locate prey. They are excellent climbers and leapers, using their long tails for balance as they negotiate steep canyon walls or trees with equal ease. The ringtails have semi-retractable claws and can rotate their hind feet 180 degrees, allowing them to descend cliffs face first. They den in niches in rock walls, boulder piles, or hollow trees. Ringtails are solitary, only pairing up for a few days of mating in April. The two to four kits are born in June. By fall the young can hunt for themselves and soon disperse. Though fierce little fighters, ringtails fall prey to great horned owls, bobcats, and coyotes.” 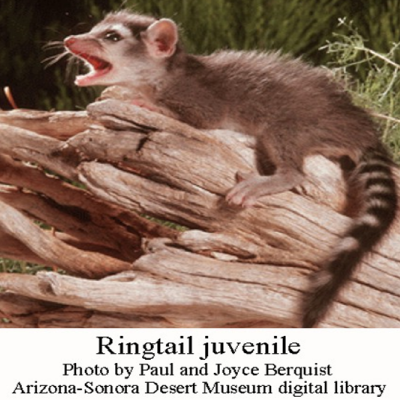 The Ringtail is the official Arizona State Mammal. (Click the link to see more photos and a video.)

Find out more about the natural history of the Sonoran Desert. Here are articles published so far: