Accipiters are hawks with relatively short wings and long tails. They are very fast, and the short wings allow them to maneuver through dense forest to catch small mammals and other birds. There are three members of Genus Accipiter: the Cooper’s Hawk, the smaller Sharp-shinned Hawk, and the larger Northern Goshawk. These hawks may be hard to distinguish from each other with certainty because they have almost identical plumage. The range of all three is similar: sub-arctic Canada and Alaska to northern Mexico. Cooper’s Hawks have relatively large heads; the other two hawks have relatively smaller heads compared to body size. Male and female plumage is similar for all three Accipiters, but females are larger. Click on the highlighted names above to see several photographs of each bird from the AvianWeb.

I took the photo below of what I think is a juvenile Cooper’s Hawk that was lunching on a dove in my back yard mesquite tree. He/she will have a reddish breast upon reaching maturity. 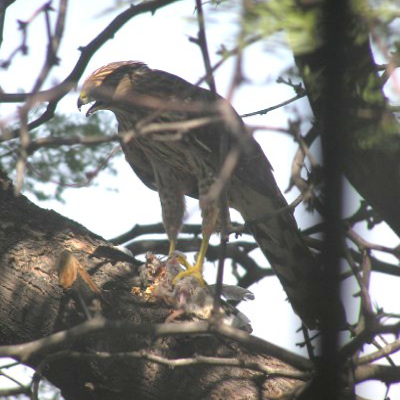 The Sibley Guide to Birds notes some differences between the three Accipiters:

Northern Goshawk is the largest and bulkiest Accipiter. Adults appear whitish below with boldly patterned head. Juveniles are washed buffy overall with thick, spotty streaks below. There is an obvious pale bar on the forward upper part of the wings.

Cooper’s and Sharp-shinned Hawks are nearly identical in all plumages. Cooper’s is the lankiest Accipiter, with large head, long neck and tail, and relatively narrow, straight-edged wings. Sharp-shinned is small-headed with relatively long, broad wings that are hunched, pushed forward and slightly more fingered at the tip. The Cooper’s tail tip is more rounded, while the Sharp-shinned is more square-tipped.

Accipiter habitat is desert, woodlands, deciduous forests, and riparian areas. They feed mostly on birds and some small mammals. They hunt from cover relying on speed and surprise.

Cooper’s Hawks nest in trees and produce three to five cobalt blue eggs. Chicks hatch after 30 to 36 days and fledge about 30 days later. Cooper’s Hawks communicate using vocalizations and displays. Listen to some of the vocalizations recorded by the Cornell Lab of Ornithology here (Scroll down and click “sound” tab). Some of the calls sound very much like Cactus Wrens to me.

Sharp-shinned hawks also build a large nest of twigs in trees and produce four or five variably-colored eggs which hatch after about 30 days. Chicks fledge about a month later. Read more information and hear sound recordings from Cornell here.

Northern Goshawks also nest in trees and lay two to four bluish-white eggs which are incubated for 28 to 38 days. Chicks fledge five- to six weeks later. The goshawk will fiercely defend its nest and even attack people if the nest is too closely approached. Read more information and hear some distinctive sounds from Cornell here.

Read more about birds in our region: