The greater roadrunner (Geococcyx californianus) may have a clownish reputation due to a popular cartoon series, but the roadrunner is a wily predator. 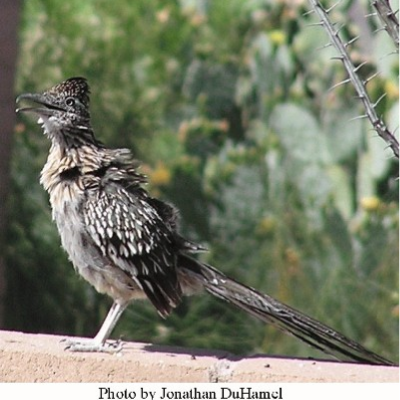 The greater roadrunner is our largest cuckoo with a body length of 20-24 inches and a wingspan of 17-22 inches. It avoids flying and prefers to run at speeds up to about 15 mph. Even just standing on the ground, it is fast enough to snatch a hummingbird out of the air.

Roadrunners feed on anything they can catch; that includes small birds, snakes including rattlesnakes, lizards, scorpions, and mice. Young roadrunners are fed on insects. Roadrunners also eat some fruits and seeds. I recall seeing a roadrunner on my back wall eyeing a family of baby Gambel’s quail. Momma quail would have none of this and flew right into the roadrunner, knocking it off the wall.

The roadrunner hunts by walking or running after prey and can jump straight up to capture insects and birds.

The pair bond in this species may be permanent; pairs are territorial all year. Courtship displays include, but are not limited to, presenting the mate with a twig or piece of grass and chasing one another.

The nest, which is constructed of twigs, is frequently found in cholla, mesquite, or palo verde. White eggs (three to six) are laid at intervals; if food is scarce the older, larger hatchlings will quickly seize all the food from the parents thus causing the younger, smaller ones to starve. Rarely do all nestlings reach maturity. If not enough food is available, these younger birds will be fed to the other, stronger hatchlings.

Roadrunner skin is heavily pigmented. On cool mornings, the bird positions itself with its back towards the sun and erects its feathers, thus allowing the sun to strike directly on the black skin which quickly absorbs heat energy. This makes it possible for the bird to achieve body heating without unnecessary expenditure of metabolic energy.

Often it seems curiously unafraid of humans. Trotting up close to peer at us, raising and lowering its mop of a shaggy crest, flipping its long tail about expressively, it looks undeniably zany.

Roadrunners are in turn preyed upon by hawks and coyotes, and snakes may go after eggs in the nest. Roadrunners are a signature bird of the southwest. According to Cornell Lab of Ornithology, roadrunners expanded their range during the 20th Century to include southern Missouri and western Louisiana. Unlike the cartoon “beep-beep,” roadrunners have some distinct sounds, listen here.

The greater roadrunner is the state bird of New Mexico. There are many cultural stories about roadrunners. Some Indian tribes believe that roadrunners help ward off evil spirits. Some early frontiersmen believed roadrunners would help lost people find trails. Cowboys’ tall tales claim that roadrunners would seek out rattlesnakes to pick fights, or would find sleeping rattlers and build fences of cactus joints around them. In parts of Mexico, the roadrunner brings babies, just like the stork is reputed to do in European legend.