Cardinals (Cardinalis cardinalis), also known as Northern Cardinals, and Pyrrhuloxias (Cardinalis sinuatus) are similar in many respects. They both eat seeds and fruit; they have similar, and in some cases, identical songs; and they can live side by side in dense brush of desert washes. The female cardinal is often mistaken for a male pyrrhuloxia. You might not think so from the photos below, but the range of plumage makes them sometimes hard to distinguish. 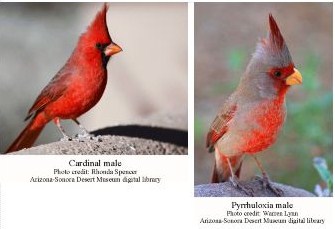 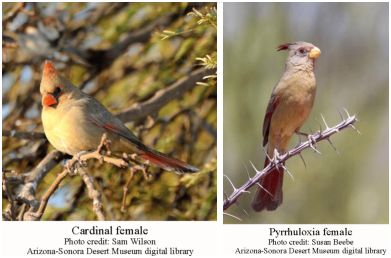 One good distinguishing characteristic is the beak. Cardinals have orange, wedge-shaped beaks, while pyrrhuloxias have light-yellow to bone-colored beaks that have a distinct curve at the end.

Cardinals have a large range which extends from Southern Ontario to the gulf states, and the southwestern states to Belize and Guatemala. See range map, sound recordings, and natural history details from the Cornell Lab of Ornithology here.

Besides eating seeds and fruit, both species eat insects when available, and the cardinal will even east Monarch butterflies in spite of the noxious chemicals the butterflies contain.

Cardinals and pyrrhuloxias have been known to interbreed which produces some curious hybrids with characteristics of both birds. That can make identification quite a challenge.

Both birds are fiercely territorial during the breeding season. Cardinals have been observed attacking reflections of themselves in windows and car bumpers. 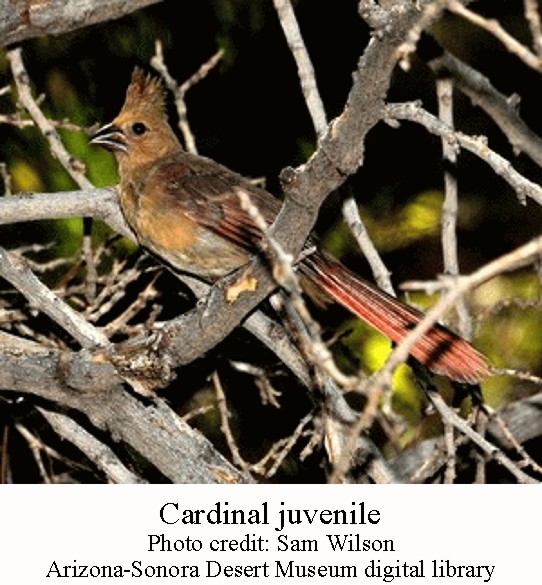 And that brings me to another cardinal-shaped bird, the Phainopepla. “A crested songbird of the deserts and arid woodlands of the southwestern United States and Mexico, the Phainopepla is unique in taxonomy, distribution, and behavior. It is particularly notable for its enigmatic pattern of breeding twice each year, in two different habitats.”

This bird has a range similar to the pyrrhuloxia, but generally inhabits higher elevations. During the winter, however, it comes to the desert floor to feed on mistletoe berries. The male is shiny black, while the female is brownish-gray. They have white on the inside of the wings which is visible during flight. The most striking characteristic is the red eyes.

All three birds can be commonly seen on the grounds of the Arizona-SonoraDesertMuseum. 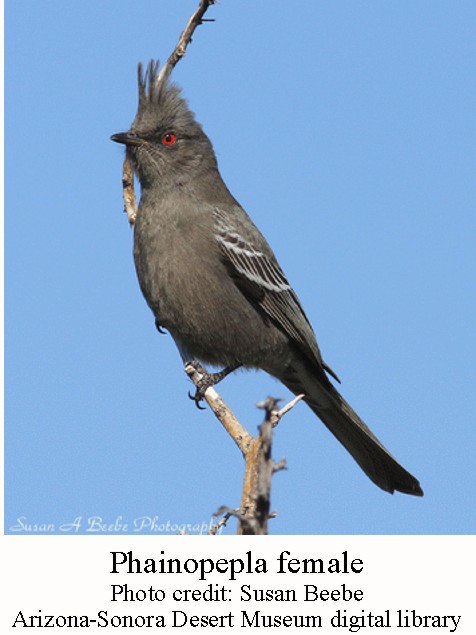