Soon, we will see parades of Gambel’s quail; the adults shepherding chicks, as they make their rounds looking for food and water. Gambel’s quail breed in spring and early summer, but the success and intensity is related to the amount of rain during the previous six months. 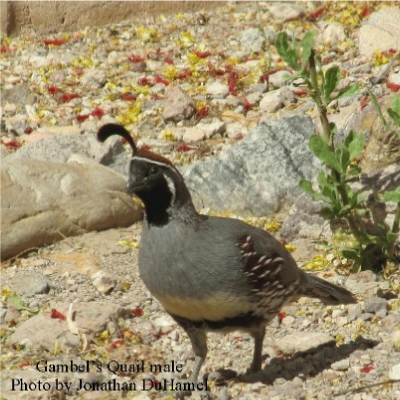 Gambel’s quail (Callipepla gambelii) are distinguished by the prominent black top-knot feathers; both males and females sport them. Their body length is about 11 inches, and wingspan is 14 to 16 inches. These quail are the most arid-adapted of all the quails. Their principal range is Southern Arizona and Southern New Mexico. In summer, they are most active in early morning and late afternoon. They seek shade and rest during the hot afternoons. They roost in bushes and low dense trees. 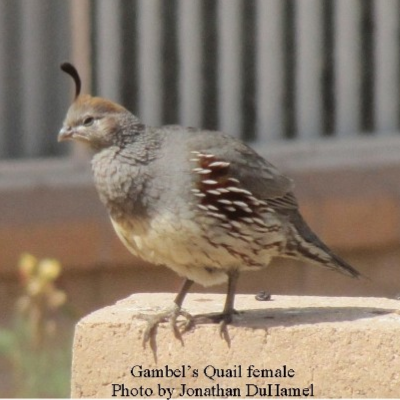 Seeds are their main diet, but they also eat insects, berries, and cactus fruit. They need water every day but can get moisture from cactus fruit.

Gambel’s quail are very gregarious birds that live in coveys of up to 20 birds during the fall and winter. In the spring mating season, they pair off and there may be quite vicious territorial fights between males. After breeding, the females usually lay 10 to 20 eggs, which hatch after 21 to 24 days. All eggs hatch the same day and the precocial chicks are able to leave the nest very soon after hatching. Very few chicks survive predation by hawks, roadrunners, snakes, bobcats, and other predators.

Most quail try to remain unobtrusive to avoid predation. The Gambel’s quail, however, is very noisy and parade around in the open. The males call loudly from low perches. If you observe a family, they seem to be having a conversation. Listen to sound recordings from The Cornell Lab of Ornithology here. These birds seem reluctant to fly and can run very fast.

Gambel’s quail can be aggressive. I’ve observed a female knocking a roadrunner off a wall by flying into it. The roadrunner was too interested in quail chicks.

There are five species of quail in Arizona. They include the Scaled quail, Mearn’s Quail, California quail (found along the Little Colorado River drainage near Springerville), and the Masked Bob-white quail, an endangered species found only in Buenos Aires National Game Refuge. Along with Gambel’s, the Scaled and Mearn’s are game birds in Arizona.

Breeding time varies for the different species. As I said, Gambel’s breed in early spring. Mearn’s quail nest only after the summer monsoon season and often postpone breeding until after the summer solstice, when the days are getting shorter. Scaled quail breed in July in Arizona but at other times of year elsewhere. The California quail, which looks very similar to Gambel’s, including the top-knot, (but the male lacks the black breast mark), also breed in early spring.

You can see more photos from the Arizona-Sonora Digital Library here.