The Cactus Wren (Campylorhynchus brunneicapillus) is the largest wren in North America, up to 8 inches long, which makes it almost twice as big as other wrens, and it is not shy like some other birds. This wren inhabits the upland desert and foothills in Arizona, northern Mexico, southern California, southern Nevada, and west Texas. Males and females have similar plumage. The male is very noisy. Listen to its call as recorded by the Cornell Lab of Ornithology here. Play all three recordings to hear the “regional accents” of this bird. 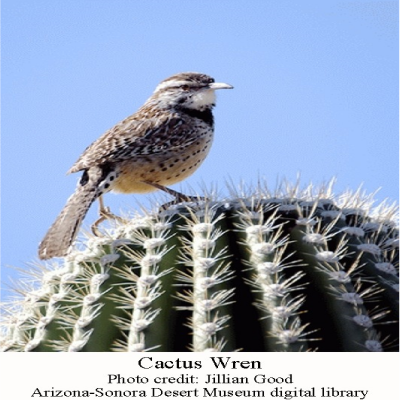 Cactus Wrens form permanent pairs and defend their territory, sometimes even by destroying nests of other birds. They nest from March through September and may have several nests going at once. Initially, both male and female build a nest, which is approximately the size and shape of a football and has a side entrance. They use dry grasses and twigs. This construction provides shade during the hot summers and shelter from cold and rain. The first nest, which may take up to 6 days to build, is lined with feathers and grass to make it soft. The female will lay 3- to 5 eggs and incubate them for about 15 days before they hatch. Meanwhile, the male builds another nest nearby as a roosting nest or retreat so the parents don’t have to sleep with noisy chicks. The male can build this second next in as little as one day. The chicks fledge after about 21 days. This sequence may be repeated; roosting nests become breeding nests for the next clutch of eggs. The male helps the female care for the chicks between his construction projects. They often recycle material from old nests to build new ones. 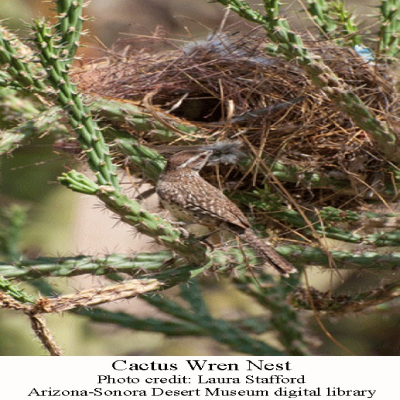 The nests are usually built in cholla cactus, but also in other cactus and in trees. The cactus spines provide some protection for the nests, but some snakes, such as coachwhips, can negotiate the spines. The birds can stand the spines because their feet are covered with tough scales and have few nerves.

Cactus wrens eat spiders and insects, as well as cactus fruit. They will also take small lizards and frogs. They forage on the ground and in trees, probing crevices and ground litter for their prey.

In the wild, these birds live 2 years according to some sources, other sources say up to 10 years.

The cactus wren was adopted as Arizona’s state bird on March 16, 1931. (Some sources erroneously claim 1973.) There are several stories on how that came to be:

According to an article in Arizona Highways, a high school student named Virginia Fetterer came up with the idea. She took her father’s advice, and consulted a local politician, who sponsored the bill.

But state bird promoter Katherine B. Tippetts told a different story in Nature Magazine (April 1932). She claimed that the cactus wren was adopted after the General Federation of Women’s Clubs was invited to hold its Biennial Council in Phoenix, Arizona. It was suggested that a state bird be elected before the event, and a campaign was launched. The cactus wren won by a landslide. An article in Arizona Wildlife (March 1931) seems to support her version.

There’s some evidence that the roadrunner might have been suggested. But the roadrunner had already been selected as New Mexico’s bird symbol, though New Mexicans waited several years to make it official. (Source)