The Tucson region has more species of native bees, approximately 1,000 species, than anywhere else on the planet according to the Arizona-Sonora Desert Museum (ASDM). Most desert bees dig burrows in the ground or use holes and tunnels made by other insects, hence the common name “ground bees.” This is in contrast to honey bees which make hives and honeycombs. There are about 5,000 species of bees in the United States. 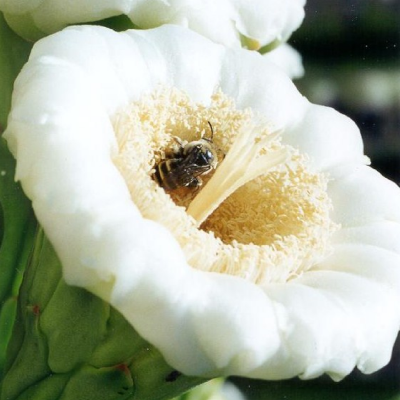 Bees evolved from wasps. Bees are vegetarians that feed on nectar and pollen. Wasps are carnivores. I have, however, seen Pepsis wasps feed on flower nectar.

Except for the parasitic cuckoo bees, all female bees make their living by foraging in search of protein-rich pollen and sugary nectar from flowering plants. Pollen is a rich source of amino acids, proteins, fatty acids, vitamins, minerals, and carbohydrates. Nectar provides the energy boost from sugars that bees need to fly. Some desert bees have specialized scrapers on their legs for harvesting oils from glands on the undersides of specialized flowers in the Ratany and Malpighia families. These energy-rich oils are mixed with pollen as larval food and are also used to help construct brood cells. Other bees collect small pebbles, plant hairs, or floral resins that they use as building materials. Some bees, such as mason bees in the genus Osmia, also require water and mud with which to construct their adobe-like nests. Leafcutter bees (Megachile) remove circular pieces of leaves to fashion into cell walls. For more information, see an ASDM article here.

About 80 percent of flowering plants in the Tucson Mountains have flowers adapted for pollination by bees. Also, at least 30 percent of our agricultural crops require bees to move pollen between flowers. Not only are we dependent upon these “forgotten pollinators” for over a third of our food, but for other products as well. Cotton cloth is a product that eventually results from bee pollination, and so are many beverages and medicines made from other fruits and seeds.

Most desert bees are solitary. Socialized bees in our region include the introduced honey bee, Africanized bees, and the native black and yellow bumblebees. For all bees, only the females sting. The stinger is an adaptation of the ovipositor, or egg laying structure. If the barbed stinger is left in the victim, the act usually rips the abdomen of the bee and causes it to die. There is some speculation that stingers evolved for inter-hive combat and in that case the bee did not lose the stinger.

Desert USA notes that Africanized bees will viciously attack people and animals who unwittingly stray into their territory, often resulting in serious injury or death.

It is not necessary to disturb the hive itself to initiate an attack. In fact, Africanized bees have been know to respond viciously to mundane occurrences, including noises or even vibrations from vehicles, equipment and pedestrians.

Though their venom is no more potent than native honey bees, Africanized bees attack in far greater numbers and pursue perceived enemies for greater distances. Once disturbed, colonies may remain agitated for 24 hours, attacking people and animals within a range of a quarter mile from the hive.

ASDM reminds us that bees provide a vital service. “Without the pollination services bees provide, many plants would not produce seed-laden fruits from which the next generation of plants would grow. Without bees, there would be few or no fleshy berries or fruits to sustain birds, mammals, and other wildlife. The tunneling activity of bees aerates the soil and allows water from infrequent rains to quickly penetrate and reach plant roots; and bees’ nitrogen-rich feces fertilize the soil. The bees themselves often provide food for lizards, mammals, birds, insects, spiders, and other arachnids.”