There are several species of spinytail iguanas (genus Ctenosaura) native to Mexico and Central America that are found in desert scrub and forest. The lizards range from 10 inches to over 39 inches long (some sources claim five feet long). Several species have been introduced into the U.S. in Arizona, Texas, Florida and perhaps other places.

These lizards were introduced into the Arizona-Sonora Desert Museum(ASDM) in the 1970s. They are reproducing but apparently have not expanded beyond Museum grounds, at least none have been reported off the grounds. Maybe, if any leave the Museum they quickly fall prey to coyotes, bobcats, and hawks. The adult lizards at ASDM can get up to about two feet long.

While these lizards have the run of the Museum, the easiest place to see them is in the Mountain Habitat and the Bighorn Sheep habitat. These lizards are territorial and usually don’t run away from you. They are rather feisty. While they usually stand their ground, they can run at up to 20 mph. Adults can inflict a painful bite.

The lizards are omnivorous and eat a variety of plant material, bugs, other lizards, small mice, birds and eggs. They take shelter in crevices and tree hollows.

“Mating generally occurs in the spring. Males show dominance and interest by head bobbing, eventually chasing the female until he can catch her and subdue her. Within eight to ten weeks, the female will dig a nest and lay clutches of up to 30 eggs. The eggs hatch in 90 days with the hatchlings digging their way out of the sand. These juveniles are typically green with brown markings, although all brown hatchlings have been recorded as well.” [source]

Newly hatched spinytails at ASDM are bright green, about six inches long. They prefer to climb in trees and bushes. The green gradually disappears as it blends into the grays and browns of the adult lizards. 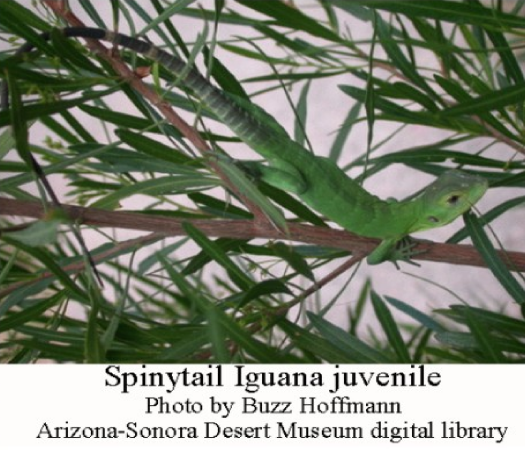 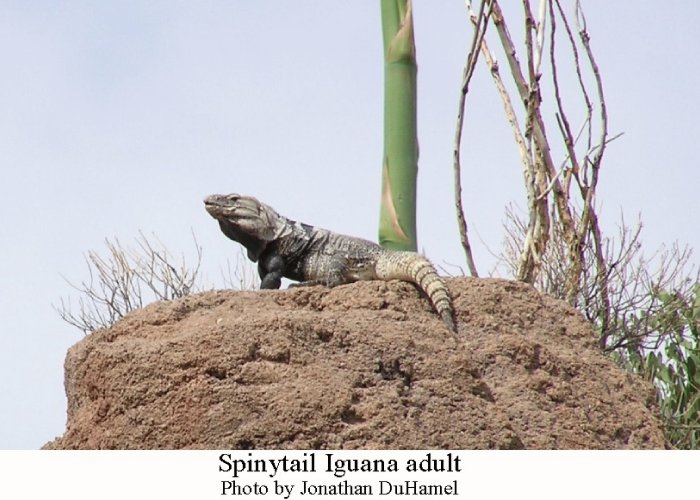 The young adult in the third photo, just a foot off the path, posed as many people took his photograph. He did watch us warily. This one is about 18 inches long.

According to Wikipedia: “In some parts of Central America, the black spiny-tailed iguana is farmed alongside the green iguana as a food source and for export for the pet trade. Although it is heavily hunted it does not appear to be endangered in any of its native territory.

According to the World Association of Zoos and Aquariums (WAZA): “These iguanas live in colonies, ruled by a pecking order: One male in the colony is dominant, and although the other males hold territories, they will only defend them against one another and not against the dominant individual. Territorial displays involve color changes, body inflation, jaw-gaping, ‘push-ups’ or rapid nodding of the head, and sometimes, biting and tail thrashing battles. Larger males usually hold bigger and better territories and they mate more often. Combat often occurs when iguanas are attaining or defending a territory or a mate. The males always court, but they can only progress if the partner provides them with the right stimuli. The female must respond by species specific sexual stimuli. She must also signal that she is receptive-with mature ova ready for fertilization. The males often bite, scratch, or lick females that have signaled their receptivity.”

Head out to the Arizona-Sonora Desert Museum to see if you can spot the big guys and the babies. One visitor got a good photo of a juvenile last Sunday.

P.S. I had heard that because these lizards were not native to Arizona, the Museum was, at one time, considering removing them from the grounds. I asked Craig Ivanyi, executive director of ASDM about this. Here is what he said:

These lizards “naturally occur in the Sonoran Desert, but not in Arizona. Transplants from Sonora (& Isla San Esteban), Mexico, were apparently released in the 1970’s. We’ve done studies to better understand population demographics and species behavior on the Museum grounds, as well as to see if there’s any evidence of them leaving our property and establishing themselves elsewhere. In spite of not seeing any evidence of them establishing themselves elsewhere, the decision was made several years ago to reduce their numbers on grounds and, over time, to create a sterilized population so that it naturally dies out some day. To this end, we have been opportunistically sterilizing individuals, as well as collecting and sending them to other zoos for exhibit elsewhere.”

I am told by another ASDM scientist that this program is essentially in-active.