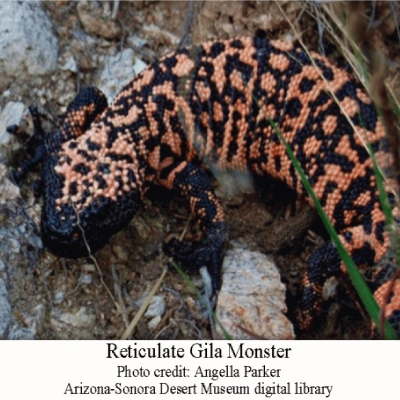 The are only two venomous lizard species in the world and both live in the Sonoran Desert region: the Gila Monster and the Mexican Beaded Lizard.

The Gila monster (Heloderma suspectrum) averages 9- to 14 inches long, but can get up to 24 inches long. It ranges throughout the Sonoran Desert region below about 4,000 feet elevation. Its range included parts of Arizona, California, Nevada, New Mexico and northern Sinaloa, Mexico. It feeds on eggs of reptiles and birds, and takes small rodents, such as pack rats, and baby mammals such as rabbits and squirrels. Mating occurs in spring or early summer. Observations in the wild suggest an incubation period of 10 months, but captive lizards produce hatchlings in about four months. 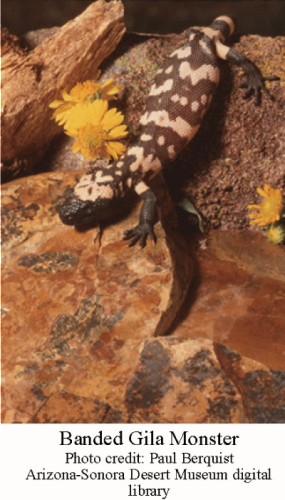 The Mexican Beaded Lizard (Heloderma horridum) averages 2- to 3 feet long. It ranges throughout southern Sonora. It feeds on birds, small mammals, other lizards, and eggs. It can climb trees. Little is know about mating in the wild. Captive lizards mate in August, produce eggs in October which hatch from January to March. 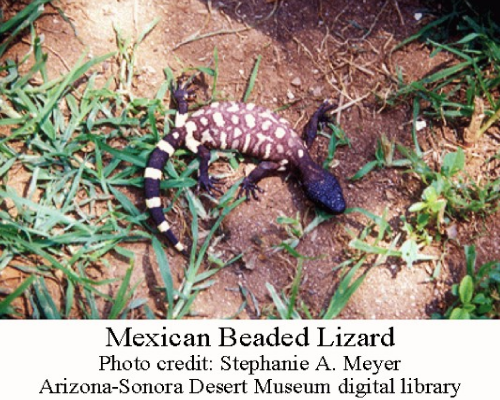 Both lizards have forked tongues which they use to sample the air to find prey. They are nocturnal hunters. The thick tails store fat. Both lizards are dormant during the winter, and both spend about 95% of their time underground. A young Gila Monster can eat the equivalent of 75% of its body weight at one meal; an adult can consume 50% of its body weight at one meal.

The venom is a neurotoxin similar to that of a coral snake. It is released from glands in the lower jaw and conducted through grooved teeth by capillary action and chewing. The lizards don’t have fangs; they just chew on you for a while, without letting go. The lizards are very tenacious. Study of the venom suggests it evolved as a defensive toxin. Bites to humans are rare. Victims have reported intense pain within five minutes of the bite and the pain may persist for several hours. Weakness, dizziness, perspiration, nausea, chills, and fever have been reported. No human deaths have been reported. A friend of mine was bitten by a Gila Monster last year. He can testify to intense pain throughout his body that lasted for several days. He was in the ICU of Northwest Hospital getting morphine drips to lessen the pain. He also experienced very low blood pressure (i.e., 36/10) during the ordeal.

Research shows more than a dozen peptides and proteins have been isolated from the Gila Monster’s venom, including hyaluronidase, serotonin, phospholipase A2, and several kallikrein-like glycoproteins responsible for the pain and edema caused by a bite. Four potentially lethal toxins have been isolated from the Gila Monster’s venom, including horridum venom, which causes hemorrhage in internal organs and bulging of the eyes, and helothermine, which causes lethargy, partial paralysis of the limbs, and hypothermia in rats. However, the constituents most focused on are the bioactive peptides, including helodermin, helospectin, exendin-3, and exendin-4. Most are similar in form to vasoactive intestinal peptide (VIP), which relaxes smooth muscle and regulates water and electrolyte secretion between the small and large intestines. These bioactive peptides are able to bind to VIP receptors in many different human tissues. One of these, helodermin, has been shown to inhibit the growth of lung cancer. There is no antivenom treatment.

Although Gila Monsters have a fearsome reputation, they are sluggish and pose little threat to humans, just don’t try to pet one or pick one up.

Myths about Gila monsters include: how the Gila monster is venomous because it lacks an anus and “all that stuff went bad in there.” Or about how “once they bite down, they can’t let go until sundown,” or “if one bites you, don’t worry, it has to turn upside down to get the venom in you.” (ASDM).

In 1952 the Gila monster became the first venomous animal in North America to be afforded legal protection; it is therefore illegal to collect, kill, or sell them in Arizona.

For other reptile stories in ADI see: