Kingsnakes eat rattlesnakes, hence their name. Apparently kingsnakes are either immune to or tolerant of rattlesnake venom. Kingsnakes also eat other snakes, lizards, amphibians, birds and bird eggs, and rodents.

Rattlesnakes can identify kingsnakes by smell. Rattlesnakes usually retreat in presence of a kingsnake and hold their head and tail close to the ground while arching their back and attempt to hit the kingsnake. Watch a 3-minute Discovery Channel video of a common kingsnake attacking and eating a rattlesnake:

Kingsnakes are usually docile, but when disturbed, they may hiss, vibrate their tail, and strike. If seized by a predator such as a coyote, the kingsnake can expel a noxious musk.

Kingsnakes come in a great variety of patterns and colors. There is some controversy over names and how many varieties there are. This is made more confusing because some varieties can interbreed with other varieties. I use the Arizona-Sonora Desert Museum naming convention here. Most kingsnake adults are three to six feet long. Below are photos of the most common varieties in the southwest. All kingsnakes have smooth scales unlike the ridged scales of the gopher snake. All kingsnakes are powerful constrictors. 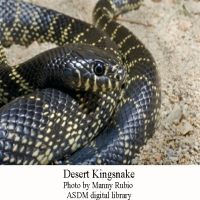 This black and white (or cream) is the most common kingsnake in the Tucson area. It is native to Arizona, New Mexico, and Texas. It normally grows to four feet but some are over six feet long. This kingsnake normally mates from March through June and produces up to 12 eggs that incubate for 60 days. Hatchlings are 8- to 10 inches long. 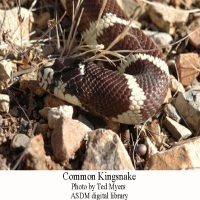 The common kingsnake used to be called the California kingsnake. It has alternating brown/black and white/cream to yellow colored bands. Adults range from 2.5 to 6 feet long. This snake occurs throughout most of Arizona, California, and Baja California. Normal mating time is May through August. The females produce as many as 24 eggs which hatch in 60 days. Hatchlings are 6- to 8 inches long and are more brightly colored than the parents. 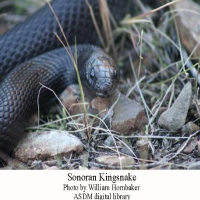 The Sonoran kingsnake is usually deep chocolate brown which may look black in some lighting conditions. It occurs in southern Arizona and in Mexico south to Sinaloa. Young snakes may have spots of white or yellow under their chin. This snake is commonly 3- to 4 feet long and rather plump compared to other kingsnakes. 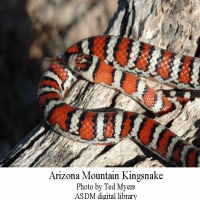 This pretty snake is variously called the Arizona Mountain kingsnake or Sonoran Mountain kingsnake, It may be 2.5 to 4 feet long. This snake inhabits the Sierra Madre in Sonora and several mountain ranges in southern Arizona. I have seen this snake in the Bradshaw Mountains near Jerome. Some occur also in Utah and Nevada. It may be confused with the coral snake, but it is much larger. Remember the rhyme: “Red touch black, OK Jack.” These snakes breed in spring and generally produce four to nine eggs. 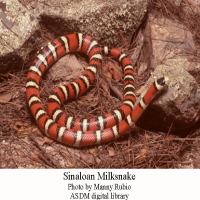 On this snake, the red bands are much wider than the black and white/yellow bands. It, too, can be confused with the coral snake. The rest of the rhyme: “Red touch yellow, kill a fellow.” In kingsnakes, the red band is surrounded by black bands.

The milk snake is commonly 1.5- to 4.5 feet long. It occurs mainly in southern Sonora, but there have been some specimens collected near the Little Colorado River in northern Arizona. This snake occurs mainly in forests and is mainly nocturnal. Breeding is similar to the mountain kingsnake.

I handle snakes at the Arizona-Sonora Desert Museum including all the kingsnakes shown above. Kingsnakes are my favorite snake. They seem more curious than other snakes. When I’m holding a snake and someone comes near, the kingsnake will take a look and flick its tongue to get a taste. Taste, by the way, is the snake’s most important sense. Their forked tongue picks up particles in the air which are analyzed by the Jacobson’s organ in the roof of the mouth. The organ is so sensitive that it can distinguish differences from each side of the forked tongue. This gives the snake a sense of direction for where the taste is coming from.

Kingsnakes have many pointy teeth to grip their prey. In the photo below, notice that snakes have four rows of teeth on top. Notice also that the teeth are very small. I have never been bitten, but other Docents have been. They say it is no big deal because the teeth are so small. 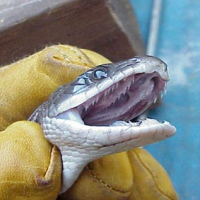 Besides the western kingsnakes described above, several species, mainly black varieties, live in the mid-western and eastern states. The eastern kingsnakes eat copperheads as well as rattlesnakes.

Be kind to kingsnakes you find in your yard. They will help protect you from rattlesnakes and eat rodents.