The Arizona-Sonora Desert Museum has recently acquired a Peregrine falcon and a Great Horned owl for Docent handling and interpretation. I am excited because I will be able to handle these birds beginning in January if museum staff can get them trained. I currently handle and interpret Harris’ Hawks and Barn owls.

The Peregrine falcon (Falco peregrinus) has a thousand-year history with humans as a hunting animal, i.e., falconry.

Adult peregrines have a body length of 14- to 19 inches and a wingspan of 39- to 43 inches and weight up to 3.5 pounds. The weight doesn’t sound like much, but try holding that weight on your hand and keeping your forearm horizontal for 45 minutes. That’s what Docent bird handlers have to do.

According to the Cornell Lab of Ornithology, “The Peregrine Falcon is one of the most widespread birds in the world. It is found on all continents except Antarctica, and on many oceanic islands.” It occurs year-round in the western U.S. Those that nest in the Arctic tundra migrate more than 15,000 miles to winter in South America.

Peregrine falcons often nest on ledges or cliff faces (and on buildings and towers). They don’t actually build a nest, just scrape a depression in the soil if they can. The male does most of the hunting while the female broods the chicks. When not breeding, a pair will hunt together.

Peregrines prey upon medium-sized birds, attacking them on the ground and snatching them out of mid-air. They initially strike prey with their feet, then return to capture the stunned bird in mid-air. Peregrines can fly at up to 69 mph in level flight and reach 200 mph in a spiral dive.

You might think that 200 mph air rushing into the nose holes (tubercles) might explode the lungs, but peregrines have a conical bony structure in the tubercles that baffles and slows the air.

Peregrines usually kill their prey by biting the neck. Most falcons (and some hawks and parrots) have a protrusion on the upper bill, called the “tomial tooth,” the purpose of which is to sever the spinal cord of the prey when the falcon bites the neck. You can see that protrusion in the photo below. 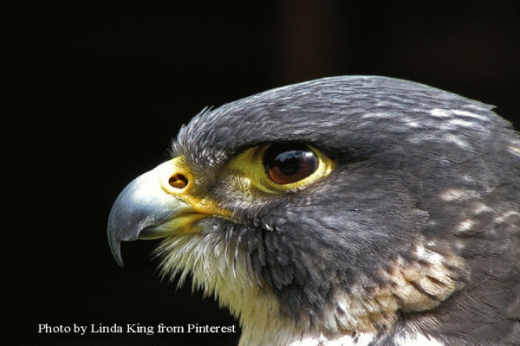 Falcons have very good eyesight. Besides binocular vision, they also have a depression, or fovea, in the retina at the back of the eye which focuses light. This feature gives the bird something like telescopic vision that enables the falcon to follow objects up to a mile away. Each eye can track separate objects independently. When you see a falcon tilting its head, it is most likely using its “telescopic” vision from one eye.

See more information at the Cornell Lab of Ornithology.