We see them soaring, searching, riding the thermals looking for lunch. Unlike raptors that hunt live prey, vultures are the clean-up crew, searching for fresh kill. Vultures appear to have excellent immune systems, and can eat carcasses without contracting botulism, anthrax, cholera, or salmonella. There are two species of vultures common in Arizona: the Turkey Vulture (Cathartes aura) and the slightly smaller Black Vulture (Coragyps atratus). Both have bald heads, red on the Turkey Vulture; gray on the Black Vulture.

Vultures are larger than hawks in the area and soar with a distinctive dihedral or V-shaped wing angle. You can distinguish between the two vultures at a distance by wing color. On the Turkey Vulture, the underside of the wings are two-toned with a dark front and a lighter gray to the rear of the wing. Black Vultures have dark wings with white tips. The tail of the Turkey Vulture extends beyond its toes in flight. 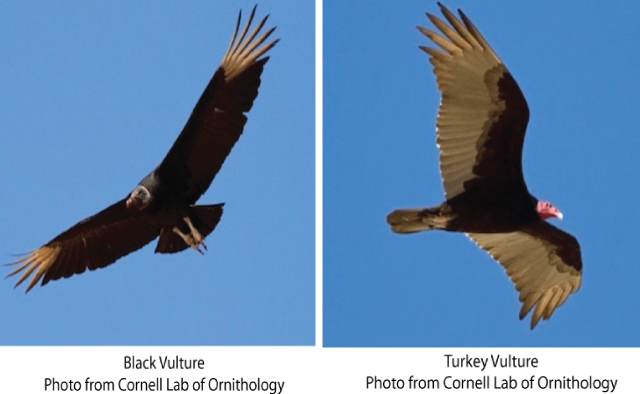 “Turkey Vultures are majestic but unsteady soarers. Their teetering flight with very few wingbeats is characteristic. Look for them gliding relatively low to the ground, sniffing for carrion, or else riding thermals up to higher vantage points. They may soar in small groups and roost in larger numbers. You may also see them on the ground in small groups, huddled around road kill or dumpsters.”

“During the day, Black Vultures soar in flocks, often with Turkey Vultures and hawks. Their flight style is distinctive: strong wing-beats followed by short glides, giving them a bat-like appearance. Look for them along highway margins eating road kill, as well as picking through dumpsters. They roost in groups in trees and transmission towers, typically waiting through the early morning for the air to warm up and for thermals to develop.”

“Vultures use cliff faces, tree stumps, caves, and hidden areas on the ground for nesting; neither species builds nests. One to three whitish, blotched eggs are incubated by both parents; the young are fed by both parents by regurgitation.

Black Vulture incubation period is 37 to 41 days. Young are capable of flight about 75 to 80 days after hatching.

Turkey Vulture incubation period is 34 to 41 days. Young are capable of flight about 60 to 70 days after hatching.

When threatened, vultures emit a hissing sound in defense; the Black Vulture regurgitates when confronted.

These birds excrete on their legs as a means of cooling themselves. This is called urohydrosis.”

ASDM Docents used to handle Turkey Vultures and that last characteristic of theirs was, shall we say, unpopular, especially if the vultures did it when we were holding them.

For more details on these birds, see articles from the Cornell Lab of Ornithology: Turkey Vultures and Black Vultures. The California Condor , the largest bird in North America (wingspan, 109″) is also a vulture. According to Cornell, “The population fell to just 22 birds in the 1980s, but there are now some 230 free-flying birds in California, Arizona, and Baja California with another 160 in captivity.”

A note on terminology: vulture versus buzzard

“Buzzard” is a colloquial term used in North America to refer to vultures. But in Europe, especially England, and parts of Asia, “buzzard” refers to hawks. When colonists first came to North America, they saw large soaring birds and called them “buzzards.” The name may be derived from “buteo” the genus name of many hawks.

Old world vultures evolved from hawks and eagles. They have feathers covering their head and a poor sense of smell. They belong to the family Accipitridae. New world vultures and condors are bald and have a good sense of smell. They are assigned to the family Cathartidae. Both types of vultures are scavengers and together represent an example of convergent evolution, i.e., dissimilar species evolving similar shapes or behavior. In the plant world, convergent evolution is exhibited by certain cacti, agaves, yuccas, and aloes all of which have similar shapes because they evolved to live in arid conditions.