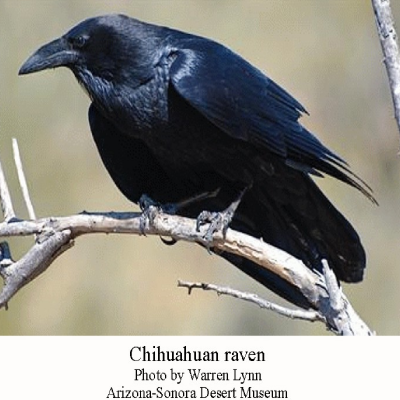 They also share other characteristics. All are completely black; all are omnivores; all are smart and adaptable.

The Cornell Lab of Ornithology describes each as follows:

The Common Raven: “Not just large but massive, with a thick neck, shaggy throat feathers, and a Bowie knife of a beak. In flight, ravens have long, wedge-shaped tails. They’re more slender than crows, with longer, narrower wings, and longer, thinner ‘fingers’ at the wingtips.”

The American Crow: “A large, long-legged, thick-necked bird with a heavy, straight bill. In flight, the wings are fairly broad and rounded with the wingtip feathers spread like fingers. The short tail is rounded or squared off at the end.”

The Common Raven has a large range which includes Mexico, the western U.S. and much of Canada. The Chihuahuan Raven occurs in southern Arizona, New Mexico, Texas, and Chihuahua, Mexico. The American Crow occurs in much of the U.S. and Canada, but is usually absent from southern Arizona.

Crows are very social and often occur in large flocks. Ravens are more aloof and usually occur singly or in pairs.

The Ravens thrive among humans and in wildlands. One study showed that Common Ravens can distinguish between gun shots and other loud noises. The gun shots means there may be a carcass available. They are acrobatic flyers. A breeding pair is very territorial and will hunt together. Common Ravens can mimic the calls of other birds. Ravens are found in almost any habitat within their range including agricultural fields, grasslands, deserts, mountains, and forests, even tundra.

What other subjects of natural history of the Sonoran desert would you like to read about?