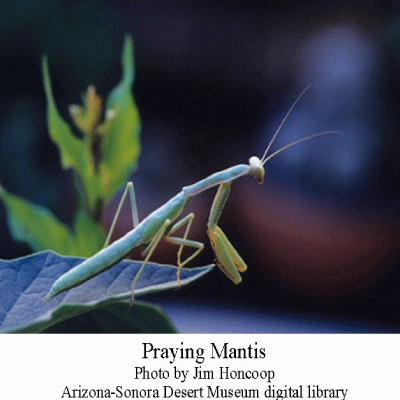 The praying mantis is a valued predator of insects. Its name derives from the way it holds its forelimbs. Mantids (that’s the plural) live all over the world in warm climates and some authorities claim about 2000 species.

Our local praying mantis (Mantis religiosa) is dull to bright green. Size ranges from 0.5- to 6 inches long (nymphs to full adult). They live about one year as adults.

Mantids have all the senses we do, but sight is their best developed. They have binocular vision able to judge distance, but often move their heads to get a better sense of location. They have two large compound eyes and three simple eyes between them on their triangular heads. Mantids are the only insects that can move their heads about 180 degrees in both directions.

Hearing is specialized. One source says the “mantids actually have one ear, in the middle of their abdomen, that can sense the high-pitched tones of a bat! This ear is especially developed to pick up the echolocation calls of bats, the ear cannot hear other tones. Because of this ear, a flying mantis can hear it when a bat is chasing him in the air. When a flying mantis hears the call of the bat at a close distance, it will suddenly make a turn and let itself drop to the ground. This saves the life of the mantis, as bats are a very common predator of flying insects.”

Mantids mate in the Autumn. After intercourse, the female often eats the male. The female will produce up to 200 eggs that are stored in a foamy material that hardens and protects the eggs during the winter. The egg sac is usually about the size of a walnut and attached to a plant. Upon hatching, the mantis nymphs resemble the adults, just much smaller.

Mantids have a morphology similar to other insects: six legs, two wings, and two antennae. 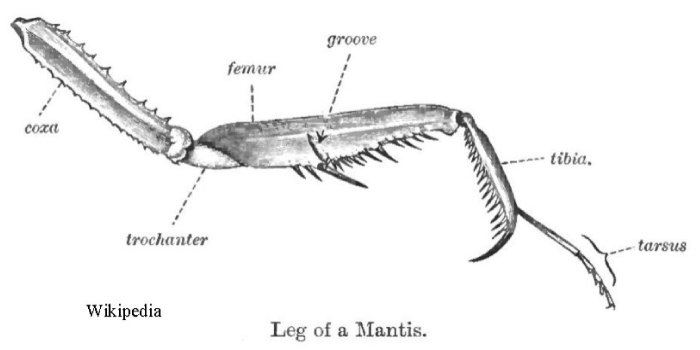 As you can see from the graphic above, the forelegs are covered with spikes designed to hold onto their prey. On a large mantis, these spikes can penetrate human skin.

Below is a link to a video from Animal Planet showing a praying mantis in action (you have to endure a 30-second ad first).

The praying mantis is a favorite with gardeners because they are a form of natural pest control. There are many websites devoted to raising mantids. The Keeping Insects site has many photos of difference kinds of mantids and information about keeping them as pets.