Although one might not expect to see a Great Blue Heron (Ardea herodias) in the Sonoran Desert, they have an extensive range (see map below) and occur throughout much of North and Central America wherever there is water. If you happen to have a koi or goldfish pond in your backyard, you may be visited by a heron.

Normally, these herons feed on fish while standing or wading in water. They have a very quick head and neck thrust as they stab with their long bill. They also feed in open fields and go after amphibians, reptiles, insects, rodents, and other birds.

According to the Arizona-Sonora Desert Museum: “Great Blue Herons breed in colonies. The male chooses the nest site and displays to attract a female. The nest site is typically in a tree 20 to 60 feet above the ground or water, although shrubs are also used as nest sites. The female lays three to five eggs in a platform nest made of sticks. The eggs, which are incubated by both parents, hatch in 25 to 30 days. The young are fed regurgitated matter by both parents. Young are able to fly after about two months.”

According to the Cornell Lab of Ornithology: “Great Blue Herons are most vocal on the breeding grounds, where they greet their partner with squawking roh-roh-rohs in a ‘landing call’ when arriving at the nest. A disturbance can trigger a series of clucking go-go-gos, building to a rapid frawnk squawk that can last up to 20 seconds. If directly threatened, birds react with a screaming awk lasting just over 2 seconds. Chicks give a tik-tik-tik call within minutes of hatching.”

“Both male and female Great Blue Herons snap their bill tips together as part of breeding and territorial displays, a behavior that may be analogous to a songbird’s territorial song. Paired birds often ‘clapper’ at each other, chattering the tips of the bill together.” Listen to the sounds here courtesy of the Cornell Lab of Ornithology. 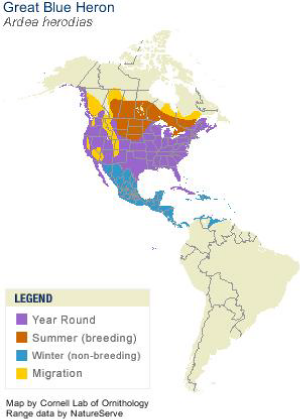 You can see this heron in both saltwater and freshwater habitats, from open coasts, marshes, sloughs, riverbanks, and lakes to backyard goldfish ponds. I know one person in Tucson who has seen them in the backyard ponds. They also forage in grasslands and agricultural fields.

You can also see a great blue heron at the Arizona-Sonora Desert Museum. I’m told by museum staff that this individual heron can’t fly well-enough to make a living because he was injured as a chick. Apparently, an eagle snatched him out of the nest and flew away with him, but something caused the eagle to let go. The baby heron fell to the ground which resulted in a broken wing and a broken leg. Fortunately, this happened at a place where the injured chick was soon discovered and brought to a vet for rehabilitation. The injury to the wing, however, was not fully fixable. So, this particular heron individual now has a good job at ASDM.