Agaves, sometimes called century plants, are succulents like cacti. Their normal life span is usually between 10 and 30 years, not a century. At the end of their time, they shoot up a stalk which grows as much as one foot per day. Agaves make a stalk just once in their lifetime, then die. There are about 150 species in North America, 40 of which grow in the Sonoran Desert. The exact number of species keeps changing because taxonomists can’t make up their minds and keep switching some species between Agaves, Yuccas, and Nolinaceae (lillies).

Agaves range from southern Utah, through Mexico, with a few species in northern South America and on some Caribbean Islands. The majority of species occur in semiarid areas above the desert floor and inhabit desert grasslands and even oak-pine woodlands.

There are two main groups of agaves, those with branched inflorescences pollinated principally by bats, and those with unbranched flower spikes, pollinated mainly by insects and hummingbirds. Agaves reproduce from seeds, by pupping from the roots, and some, such as the octopus agave, produce plantlets on the flower stalk instead of seeds. 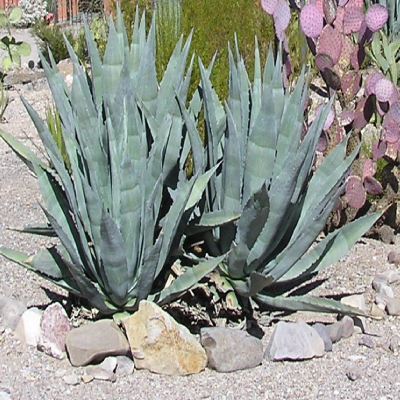 Aztecs, Anasazi, Hohokam, and the Tohono O’odham have used the agave for fiber, food, medicine, adult beverages, and building materials for thousands of years. The earliest known use was in the Techuacán Valley of Mexico 10,000 years ago. Agaves have been used by people in southern Arizona for at least 4,000 years both as a wild plant and a cultivated plant. A Hohokam agave field located in the South Mountain bajada at Awatukee, near Phoenix, has been dated at 700 A.D. The earliest know site in Tucson, located off Cortaro Farms Road, just east of I-10, dates from about 480 A.D.

Fiber, called sisal from Agave sisalana and henequen from Agave fourcroydes, is extracted from the spiked leaves. The cut leaves were allowed to dry or were baked, then pounded to loosen the pulp which was combed out with a sharp stick and washed away with water. By the way, the pulp in some species is acidic enough to cause dermatitis but baking reduces the acidity. The cleaned fibers were used to make clothing, rope, baskets, and brushes. The end spines could be used for needles, and with careful extraction, come with thread attached. I have used this for an emergency field sewing kit.

Agaves have been exported around the world. I have seen plantations in South Africa where agaves are grown for sisal fiber. 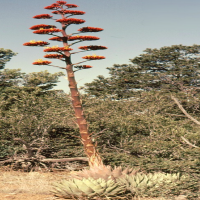 Most parts of the agave can be eaten: leaves, flower stalks, flowers, and seeds, but only after cooking.

After the leaves were cut off, the heart of the plant (imagine a giant artichoke) was roasted yielding a sweet nutritious food that is slightly slimy and tastes like molasses. This food could be wrapped in the skin of the leaves and stored. Cooking is essential because otherwise the heart of the agave is poisonous according to some sources. 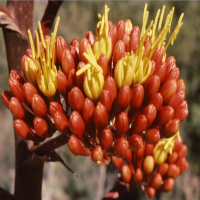 The juice of the agave heart was boiled down into a sweet syrup. I have a bottle of “organic blue agave sweetener” from Trader Joe’s which claims to be made from the nectar. I doubt that, however, because there simply isn’t enough nectar for commercial uses. It is probably made from the juice in the agave heart.

The juice could be fermented (by spitting into it) into pulque, a beer-like drink. It wasn’t until the Europeans arrived with their knowledge of distillation that the agave juice was made into tequila and other distilled spirits. It is my understanding that tequila is a proprietary name and only spirits distilled from the blue agave can be called tequila. Other agave spirits are called mescal or bacanora. Some sources say that the Mescalero Apaches of southern Arizona were named after their extensive use of the “mescal” agave.

The juice or syrup also was used medicinally. The agave contains polysaccharides which are bactericidal, and saponins and sapogenins that have antibiotic, fungicidal, and antiviral properties. Saponin in Agave schottii is being investigated for cancer treatment.

The stalks can be used for a variety of building purposes and they make good, light, strong walking sticks.

That’s the end of this story.

Note to readers: For more than a year, I have provided a story on the natural history of the Sonoran Desert almost every Sunday. I learned this information mainly by serving as a Docent at the Arizona-Sonora Desert Museum for the past fifteen years, and from my practice as an exploration geologist, tramping around the desert. I would like to hear from you about what other natural history subjects or questions about the desert you would like to read about. I also encourage you to visit the Arizona-Sonora Desert Museum and take a Docent tour. You will learn much more about how the desert works. Below is a list of stories I’ve written so far: