The Ocotillo (Fouquieria splendens) is a woody shrub that looks like a prickly dead stick most of the year. But with the monsoon rains, it wears a coating of leaves. It can completely leaf out within two or three days of a good rain and it will lose the leaves if it is dry for about two weeks, only to leaf out again with another good rain. 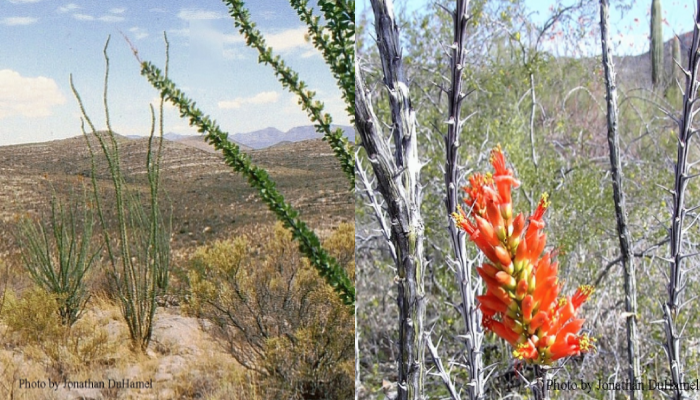 Ocotillos produce reddish-orange flowers in the spring, as early as February and as late as May depending upon elevation. Hummingbirds are the main pollinators and the sweet nectar provides crucial energy that aides the hummingbird migration from south to north. The long, tubular flowers seem designed for the long beak of the hummingbird. Other birds and insects visit the flowers also, but they cheat. Verdins and carpenter bees, for instance, cannot fit their mouth parts into the narrow flowers so they slit the base of the flower and steal the nectar without performing the service of pollination. There is a twist in this story however. According to the Arizona-Sonora Desert Museum (ASDM), a study discovered “that hummingbirds rarely visit ocotillos in the Big Bend area of Texas. But carpenter bees do, and they transfer pollen effectively while crawling around on the inflorescences biting through the flower tubes. So at least in this population, what appears to be a nectar thief is in fact the major pollinator.” Antelope ground squirrels are nimble enough to climb the prickly branches and eat the flowers.

The metabolism of a leafless ocotillo remains a mystery. According to ASDM, “Though ocotillos look like (albeit weird) woody shrubs, they behave as if they were CAM succulents. They have very shallow roots, as do succulents. Full-grown leaves are produced as quickly as within three days of a summer rain, and fall off after a couple of weeks of dry weather. This rapid leaf production suggests that the thin layer of moist, green tissue beneath the brown cuticle would have CAM-idling metabolism. But it doesn’t; it’s C3, as are the leaves. It photosynthesizes during the day in the dry season when the stems are leafless.”

Geologists have learned that if we see ocotillos growing above 4,000 to 5,000 feet in elevation, the bedrock is most likely limestone. Limestone weathers slowly without cracking and makes a very thin soil that favors drought- and sun-tolerant plants. Also, limestone has a high specific heat, meaning that it stores heat better than other rocks and thereby provides frost protection for the ocotillos.

At lower elevations, ocotillos favor granite because granite decomposes into a gravelly mulch that retains moisture.

Ocotillos branches have long been used for fencing, house walls, and ramada roofs by Indians and ranchers. Ocotillos have “advantageous” roots, a characteristic shared with jointed cacti such as prickly pear and cholla. That means a cut joint placed in the ground will take root, and, in the case of ocotillos, you can build a living fence.

Ocotillo flowers are edible and some people use them for salad garnish. The taste ranges from sweet to slightly sour and astringent depending on how much nectar remains. The flowers can also be soaked in cold water to make a refreshing beverage.